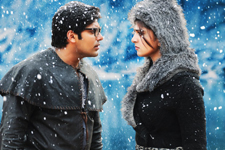 Ravi Kandala / fullhyd.com
EDITOR RATING
3.0
Performances
Script
Music/Soundtrack
Visuals
4.0
2.0
2.0
8.0
Suggestions
Can watch again
No
Good for kids
No
Good for dates
No
Wait to rent it
No
Note the cast section in our review: we have but two names there - Arya and Anushka. Because these are the only faces you will recognize in the movie. And maybe Ashok Kumar, if you are from the age when he was a known face in Telugu serials that played on Doordarshan. The remaining cast of the film consists of completely unknown faces, most of them foreign.

This is one of the things that make Varna unbearable. Seeing just these two actors in two parallel universes with terrible make-up and even worse dubbing is enough to torture people for the duration of the movie.

Now if you'll notice properly, we mentioned that this is one of the things that make Varna unbearable. Quite obviously, there are several other factors that make you want to run out of the theatre and dunk your head in a bowl of cold water (or dunk a glass of cold beer into yourself).

Varna is a result of the over-active (read drug-induced) imagination of director Selvaraghavan. Selva made 7/G Brindavan Colony a few aeons ago, which was a hit in Telugu; and as a result, his subsequent movies keep getting foisted on us regularly. And if you are one of those who's seen his previous venture, Yuganiki Okkadu, and considered that absurd, trust us when we say you haven't seen anything yet.

Varna is a love story between characters played by Arya and Anushka. In today's world, Arya goes by the name Madhu Balakrishna (the absurdity begins here, what sort of a name is Madhu Balakrishna?), a math tutor, and Anushka is Ramya, a doctor. The two fall in love after a contrived romance that lasts the entire first half.

In a parallel world, Arya is Mahi, a vagabond-turned-soldier, while Anushka is Varna, a slave girl who wishes to be free. This parallel world does not know what love is, and while Mahi keeps trying to force himself on Varna, the girl keeps repelling him with equal fervor. How these worlds and characters collide, and how the parallel universe learns about love, forms the remaining plot of the movie.

This absolutely fantastic and incredible tale is told with outstanding visual flair and zero narrative panache by Selvaraghavan. The movie flips between the parallel universes in the first half, and shifts completely to the parallel universe populated with strange creatures and stranger humans in the second half.

The film begins with a tedious love story which drags on and on without ever drawing you in. The characters keep saying yes and no to each other multiple times, and finally fall in love, only to be separated immediately.

The fantasy world in the second half is too vague and weird. Firstly, we never got used to the fact that the strange-looking white characters speak rustic Telugu. The world and customs of the people in this country are also totally outlandish, leaving the audience with major disconnects.

Arya and Anushka are completely handicapped by the script. They put in competent performances, but in a lot of places, seem like they are forced to do what the director asks them to do. The rest of the cast is not even worth mentioning.

The music is terrible, and the songs are replete with weird lyrics - we thought we even heard a line that goes "veedhilo okate untundi, intlo rendu manchaalu untaayi".

However, the visuals are brilliant, and the VFX team brings Selva's imagination to life in an outstanding manner. The VFX integration is nearly seamless, leaving us with a grand visual experience.

If you've never felt acute restlessness, Varna is for you. By the end of it, you will not wish it upon your worst enemy.
Share. Save. Connect.
Tweet
VARNA SNAPSHOT 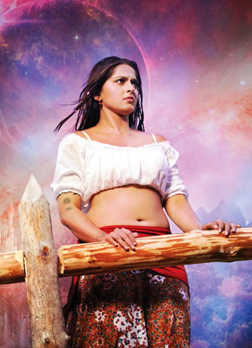 ADVERTISEMENT
This page was tagged for
varna full movie in telugu
Varna telugu movie
Varna reviews
release date
Arya, Anushka Shetty
Follow @fullhyderabad
Follow fullhyd.com on
About Hyderabad
The Hyderabad Community
Improve fullhyd.com
More
Our Other Local Guides
Our other sites
© Copyright 1999-2009 LRR Technologies (Hyderabad), Pvt Ltd. All rights reserved. fullhyd, fullhyderabad, Welcome To The Neighbourhood are trademarks of LRR Technologies (Hyderabad) Pvt Ltd. The textual, graphic, audio and audiovisual material in this site is protected by copyright law. You may not copy, distribute, or use this material except as necessary for your personal, non-commercial use. Any trademarks are the properties of their respective owners. More on Hyderabad, India. Jobs in Hyderabad.