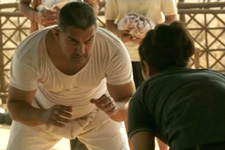 Ravi Kandala / fullhyd.com
EDITOR RATING
9.0
Performances
Script
Music/Soundtrack
Visuals
9.0
9.0
9.0
9.0
Suggestions
Can watch again
Yes
Good for kids
Yes
Good for dates
Yes
Wait to rent it
No
There is only so much you can do with a movie that revolves around sports. The story is always standard - an underdog who has much to prove, a superior opponent who will stop at nothing to win, a down-in-the-dumps coach, loads of emotional manipulation and a heartstopping finale in which the underdog wins against all odds. You can either go spectacularly right (Chak De India) or go spectacularly wrong (several movies like Dhanadhan Goal).

The leading man of Dangal, Aamir Khan, has done it before, too. He has starred in Jo Jeeta Wahi Sikandar and Lagaan - both of which followed the template to the T and were major hits. This time, though, the odds were much bigger. Aamir himself raised those odds - he is no longer the young man from JJWS or the emerging superstar of the Lagaan time. He is, instead, India's thinking actor who makes only blockbusters, and hence the expectations from Dangal were much higher.

In the face of such expectations, Khan delivers. And this time, he does it standing on the sidelines. For Dangal is more about Geeta and Babita Phogat, and while it makes detours to accommodate the "bawla" baap played by Khan, its focus is clearly on the triumphs of the sisters. Dangal is manipulative cinema at its best, touching on each nerve that it is meant to - it raises its voice against sexism, is fiercely feministic, brings out the patriotic nerve in everyone sitting in the stadium theatre, and plays on the girl factor more than once to leave everyone moist-eyed.

Dangal begins with the journey of Mahavir Singh Phogat and his failure to win a gold medal in an international wrestling event for India. He then dreams of having a boy who will fulfill his dream, but his wife (Sakshi Tanwar) delivers only four daughters in a row. Phogat gives up his dream until one day it strikes him that a gold is a gold - whether it is won by a girl or a boy.

And thus begins a nightmare for his elder daughters Geeta (Zaira Wasim) and Babita (Suhani Bhatnagar). The girls are forced to wake up at 5 each morning, learn wrestling, wear shorts, eat chicken and, heartbreakingly, cut their hair short. How they grow up into fine young wrestlers (Fatima Sana Shaikh and Sanya Malhotra) and finally realise their father's dream forms the rest of Dangal.

Khan is fantastic in his portrayal of the man who decides he can be only one thing at a time - either the coach or the father. Everything about him - from the way he raises his left hand with a close fist to denote victory and the way he breaks into a run at the end - is authentic, and makes you forget that you are watching the biggest money-spinner in Bollywood.

Sakshi Tanwar supports him admirably, but it is the girls - all four of them - who are the clear winners. This writer hasn't seen too many finer performances, and it is not just about their acting. The girls have clearly learnt the sport, and the authenticity that comes through in the wrestling matches is to be seen to be believed. They elevate the movie to a different level altogether. Aparshakti Khurana and a younger actor who plays the role of a cousin to the girls are brilliant, too.

The cinematography by Sethu Sriram is wonderful, and captures the earthy tones of Haryana and the wrestling arenas with equal élan. The music supports the narrative beautifully. The only grouse you could have against such a film is that it felt the need to demonise a national coach - if only they'd resisted that temptation, Dangal would have been near perfect. Director Nitesh Tiwari does the best thing by letting the sport dominate his story-telling, and delivers a certified blockbuster.

Go watch Dangal. In a year in which Indian sportswomen lifted the entire country's spirits with their performances, Dangal is the perfect icing on the cake. You will walk out with a smile on your face, and what better way than that to end the year?
Share. Save. Connect.
Tweet
DANGAL SNAPSHOT 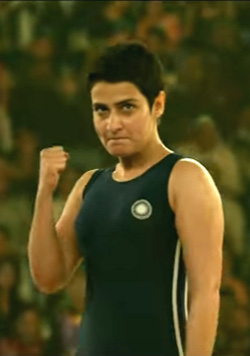 See Dangal full details
DANGAL USER REVIEWS
1 - 5 OF 5 COMMENTS
POSITIVE  |  NEGATIVE |  NEWEST  |  OLDEST  |  MOST HELPFUL  |  LEAST HELPFUL
USER RATING
9.0
2 USERS
Performances
Script
Music/Soundtrack
Visuals
9.0
8.0
7.0
10.0
Can watch again - Yes
Good for kids - Yes
Good for dates - Yes
Wait to rent it - No
Hari on 3rd Jan 2017, 10:44am | Permalink
Easily the best movie of the year(or several years !!). Aamir delivers again !!
As many have already said, this movie belongs to the 4 girls though.
I especially liked young geeta(Zaira Wasim). Her wrestler attire and attitude were
spot on. Loved it. Bravo.
And can't say enough of Aamir's performance. He nails it (every time).
Songs add to the rousing visuals - particularly dhaakad song with it's awesome lyrics.
Goosebumps.
Ravi K is spot on about the one jarring aspect of the movie about the national coach part. Way too dramatic and brought the movie a notch down. But for that, the movie is a 10/10 for me.
Do not miss this. You won't get to watch these sort of movies very often.

-Hari.
RATING
9
Booyakasha on 2nd Jan 2017, 11:22am | Permalink
Inexcusable if you miss this and make sure you take the whole family with you. 2 scenes that were pure gold:

1. Geeta calls up her father to apologise and is unable to speak a word out of remorse. Mahavir understands and breaks down. Best Father-Daughter scene you're ever going to see!!

2. The moment Mahavir hears the national anthem while inside the janitor room. Subtlety at its best.


Pros: Aamir, the 4 wrestling girs + the 2 actors who played his boyhood and adult nephew
Cons: The ending was a tad dramatic. Should've been simple and real
RATING
9
Gulmohar gang on 30th Dec 2016, 2:46am | Permalink
Yes Aamir gained and lost all those kilos and acted brilliantly, but this film belongs to the talented and striking Zaira, the very very cute Suhani, the awesome Fatima and the best actor in the film Sanya....also Aparashakti and Sakshi acted well....
Josh on 24th Dec 2016, 7:26pm | Permalink
Oh mother.. that first scene!
Gautamdev Desam on 24th Dec 2016, 1:23am | Permalink
And yet again, our connoisseur displays his usual finesse in putting together a review with the right perspective!

"and a younger actor who plays the role of a cousin to the girls are brilliant, too...".

The actor quoted above, would now be dying to get named in your next review!

ADVERTISEMENT
This page was tagged for
Dangal hindi movie
Dangal reviews
release date
Aamir Khan, Sakshi Tanwar
theatres list
Follow @fullhyderabad
Follow fullhyd.com on
About Hyderabad
The Hyderabad Community
Improve fullhyd.com
More
Our Other Local Guides
Our other sites
© Copyright 1999-2009 LRR Technologies (Hyderabad), Pvt Ltd. All rights reserved. fullhyd, fullhyderabad, Welcome To The Neighbourhood are trademarks of LRR Technologies (Hyderabad) Pvt Ltd. The textual, graphic, audio and audiovisual material in this site is protected by copyright law. You may not copy, distribute, or use this material except as necessary for your personal, non-commercial use. Any trademarks are the properties of their respective owners. More on Hyderabad, India. Jobs in Hyderabad.