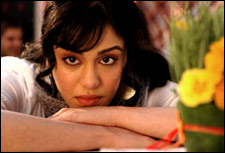 Nupur Barua / fullhyd.com
EDITOR RATING
5.0
Performances
Script
Music/Soundtrack
Visuals
5.0
5.0
5.0
5.0
Suggestions
Can watch again
Yes
Good for kids
No
Good for dates
Yes
Wait to rent it
Yes
Since Phhir has been advertised as a movie from the makers of Haunted (which has become a hit, if one counts the number of success parties the makers threw), you will be forgiven for expecting a supernatural thriller. Spoiler alert - it is not. It is a psychological thriller, the likes of which Hollywood is famous for.

The movie begins with a sepia-toned sequence, in Manchester, some years ago. A bearded man, whose face we cannot see, but who is obviously Rajniesh Duggal, pleads with a holy man (Dr. Mohan Agashe) to help with his repentance. The holy man says that the bearded man needs another life to fulfil his karmic cycle. And so the man shoots himself dead.

Cut to the present. Kabir Malhotra (Rajniesh Duggal), a doctor in Newcastle, is newly married to the love of his life, Sia (Roshni Chopra), a law professor in the making. All is hunky-dory till Sia disappears.

When Kabir goes to the police station to file a report, he meets Pakistani cop Asif Sheikh (Parag Tyagi) - necessary to have a Hindustani-speaking friend in the right places in an English-speaking country - who takes on his case with a passion reserved for people from the Indian sub-continent.

Enter Disha (Adah Sharma), who is gifted with ESP (extra-sensory perception). She can tell a person's future and past by either touching an object that belongs to him, or by looking/touching the person himself. The rather tech-savvy Newcastle police force hires for her expertise in most cases. Kabir scorns her abilities, till he is forced to realise that she may not be a fake psychic.

A missing wife, a broken-hearted husband, a helpful cop and an extra-sensitive young woman - perfect ingredients for a taut thriller. The story, by Vikram Bhatt, has its moments, despite the rather disappointing and totally predictable climax. Kabir is obviously paying for the sins of his past birth, and there is clearly a reason for Disha to become so attached to him.

However, there are some sequences that do not make too much sense. For example, why does Sia not say a word when Kabir breaks a bottle over some random guy's head and then immediately proposes to her?

The title montage and the dates and time that appear at the edge of the screen to differentiate one day from the next look rather sci-fi, very Terminator meets Independence Day. The back and forth between scenes and time can be a bit jarring, though.

While the music is decent, its placement is all wrong. Happy songs when Kabir is depressed, sad songs when the couple is having a blast, and sudden song sequences between gripping scenes, can disorient the pace a little.

Adah Sharma is a natural. She is the best performer in the movie, whether she speaks in Hindi or English. She looks a little scary at times, but is otherwise near-perfect. Roshni Chopra could not have asked for a better debut on the big screen, and makes a mark. Rajniesh Duggal oscillates between good acting and hamming.

Parag Tyagi is rather stilted and uncomfortable, and his voice sounds dubbed. Dr. Mohan Agashe looks like Osho, and is wasted in the movie, with some major corny dialogues.

The production design is not radically different, and all the big estates in the movie look alike. Thankfully, the movie does not deal with touristy shots of the locations, and that makes it somewhat real. The basement in the house of the bearded man is a little too filmy, perhaps. Adah Sharma has some strange hairstyles at regular intervals, and her initial prop, the guitar, is irrelevant to her character, but she dresses well. As does Roshni Chopra.

The screenplay is somewhat tight, and Phhir can keep you engaged throughout. Just do not expect an extraordinary/intellectually stimulating movie, and you may just appreciate the experience.
Share. Save. Connect.
Tweet
PHHIR SNAPSHOT

ADVERTISEMENT
This page was tagged for
Phhir hindi movie
Phhir reviews
release date
Rajniesh Duggal, Adah Sharma
theatres list
Follow @fullhyderabad
Follow fullhyd.com on
About Hyderabad
The Hyderabad Community
Improve fullhyd.com
More
Our Other Local Guides
Our other sites
© Copyright 1999-2009 LRR Technologies (Hyderabad), Pvt Ltd. All rights reserved. fullhyd, fullhyderabad, Welcome To The Neighbourhood are trademarks of LRR Technologies (Hyderabad) Pvt Ltd. The textual, graphic, audio and audiovisual material in this site is protected by copyright law. You may not copy, distribute, or use this material except as necessary for your personal, non-commercial use. Any trademarks are the properties of their respective owners. More on Hyderabad, India. Jobs in Hyderabad.