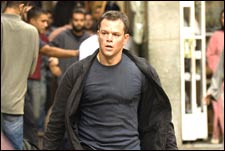 Samrat Sharma / fullhyd.com
EDITOR RATING
8.0
Performances
Script
Music/Soundtrack
Visuals
NA
NA
NA
NA
Suggestions
Can watch again
NA
Good for kids
NA
Good for dates
NA
Wait for OTT
NA
I completely disagree with people who insist that this or that particular movie needs you to leave your mind at home and watch it. I may have said this before, but why can't a film be smart enough for you to have pure fun while not feeling stupid or having to make yourself brain dead? With The Bourne Ultimatum, director Paul Greengrass and star Matt Damon have managed to construct a rollercoaster of a fantastic action film, which thankfully does not require you to be stupid in any way.

The Bourne Ultimatum is not just the best action film this year; it may well be one of the best films this year, period. It's a 2-hour long chase and fight sequence, and completely devoid of any extra trimmings that may make it sag. This is pure fat-free entertainment, with every moment serving a thrill ride. I sat transfixed to the screen for the duration of the film, all the while giggling at the audacity with which Greengrass films his action.

A good section of Ultimatum takes place between the Moscow sequence of The Bourne Supremacy and the New York section at the end of the same film. The film just explodes onto the screen from its opening frame, and continues to exceedingly do so for its entire running time. After feeling pangs of guilt and confronting the daughter of one of his victims, Jason Bourne (Damon) begins to remember in staccato flashbacks his time spent at Treadstone when he was just David Webb, a soldier being inducted into the world of CIA assassins.

A British journalist (Considine) has learnt about Bourne's existence and the plot by Treadstone, now called Blackbriar, to kill him, and is exposing the same in his newspaper. In search of clues, Bourne reaches the man, and a game of hide and seek in the middle of Victoria station in London ensues. It is the very grain of this film, the kind of tense action sequence that Greengrass excels in, and what defines Bourne for us. The visceral fun of knowing that Bourne is going to try his hardest to beat not just assassins at the station but also the security cameras, and the execution that proves you right, are what Bourne movies are made of.

Bourne's search takes him to Tangiers, where after a brilliant chase sequence, he ends up mano y mano with a Blackbriar assassin, and I must say that this is the make or break sequence in the film. If you were not a fan of the rushed, quickly cut, handheld camera shot closed quarter action sequence of Supremacy, you might dislike this film's action on general principal. But if like me, you are open to seeing some up close and personal fisticuffs, mounted in a fashion that lets you be a part of the fight, you will be privy to one of the most viscerally exciting and bloody hard-hitting action sequences in a Hollywood studio film.

In New York, we see Blackbriar boss Noah Vosen (Strathairn), a whittled old man who is committed to running his operation successfully, even if, and especially if, that means eliminating Bourne. Working with him is Pamela Landy (Allen), the one CIA operative who believes that Bourne is just looking for answers, and poses no threat to them as long as they are willing to leave him alone.

Strathairn turns in yet another strong performance after last year's Good Luck, Good Night. His character comes across as a devastatingly efficient boss man, a man whose very presence fills the room with the need to follow orders. Allen takes a thankless role and turns in a performance with crackling enunciation that makes her character appear more than what it must be on paper.

The third strong character in the film is CIA grunt Nicky Parsons (Stiles), who is helping Bourne out. Her involvement with Bourne instantly seems odd, but the film just no-nonsense pits her as a credible plot point, and the seamless way in which her role flows leaves no room for doubt. She is in constant danger of being reduced to the hero's helping hand cliché, but Stiles and some spirited writing from the screenwriters keep her from becoming so.

But the film belongs to Matt Damon. With a focused look and a determined stare, the character conveys a range of thoughts, even in the action-heavy film that Ultimatum is. His is the character that constantly improvises on his situation at the spur of the moment, and is very, very good at surviving adverse situations, which requires Damon to convey his thoughts, his innovations, his eureka moments simply through his facial expressions.

Not once does Damon let you feel that any of the action happening on screen is pre-determined and that he is not Bourne, calculating every aspect of a situation at every moment and picking up the best path. Despite that lack of spoken dialog, the range of emotion and trauma and pure brute force thinking that he conveys is bloody fantastic.

Ultimatum is such a fun ride, and such a well-crafted film, that you are sucked in from the first scene. The film constantly challenges your pre-conceived notion about stupid action films, and delivers a satisfying answer. Even the end catharsis that Bourne ultimately gets, the answer to his perennial search, is so well-crafted and intelligently shown that instantly the film elevates into being an intelligent character study.

Greengrass has a chaotic frenetic style to his action choreography, and you are well advised to be patient with that. On all counts he has proved that he is a director worth following, as his eye for character drama and explosive action are both unnerving and spot on at the same time. A must-watch for fans of fun films that don't need you to stupidify yourself to enjoy them.
Share. Save. Connect.
Tweet
THE BOURNE ULTIMATUM SNAPSHOT

See The Bourne Ultimatum full details
THE BOURNE ULTIMATUM USER REVIEWS
1 - 6 OF 6 COMMENTS
POSITIVE  |  NEGATIVE |  NEWEST  |  OLDEST  |  MOST HELPFUL  |  LEAST HELPFUL
USER RATING
7.7
33 USERS
Performances
Script
Music/Soundtrack
Visuals
NA
NA
NA
NA
Can watch again - NA
Good for kids - NA
Good for dates - NA
Wait for OTT - NA
Malik on 7th Nov 2007, 10:15pm | Permalink
iam happy this is last part.so no chance of further damage to novel.
RATING
4
Pratap Reddy on 7th Nov 2007, 12:50pm | Permalink
Movie is just average... The first statement in this review is a bit of a over statement... This requires you to leave all your brains at home before you watch the movie... Climax is super bore... and some james bond flicks have a better script than this one... Bbye Bourne... No more Bore.
RATING
4
Kamal on 6th Nov 2007, 4:55pm | Permalink
i felt overhyped after watching it.More style and lacking substance.Director and writer could have used more time to develop the story as they have taken old novel.
RATING
4
Geeta on 5th Nov 2007, 11:13pm | Permalink
If you have already seen Bourne Identity and Supremacy, this comes as a yawn...
RATING
4
Venu on 4th Nov 2007, 7:45pm | Permalink
Good action Movie...infact one of the best in recent years.
telugu film makers should learn that 'what exactly an action movie called..!,

ADVERTISEMENT
This page was tagged for
The Bourne Ultimatum english movie
The Bourne Ultimatum reviews
release date
Matt Damon, Julia Stiles
theatres list
Follow @fullhyderabad
Follow fullhyd.com on
About Hyderabad
The Hyderabad Community
Improve fullhyd.com
More
Our Other Local Guides
Our other sites
© Copyright 1999-2009 LRR Technologies (Hyderabad), Pvt Ltd. All rights reserved. fullhyd, fullhyderabad, Welcome To The Neighbourhood are trademarks of LRR Technologies (Hyderabad) Pvt Ltd. The textual, graphic, audio and audiovisual material in this site is protected by copyright law. You may not copy, distribute, or use this material except as necessary for your personal, non-commercial use. Any trademarks are the properties of their respective owners. More on Hyderabad, India. Jobs in Hyderabad.