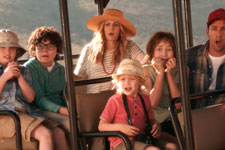 Kritika Deval / fullhyd.com
EDITOR RATING
3.0
Performances
Script
Music/Soundtrack
Visuals
6.0
3.5
6.0
6.5
Suggestions
Can watch again
No
Good for kids
No
Good for dates
Yes
Wait for OTT
Yes
There is a place for racism and sexism - usually when the racist or the sexist is the bad guy. Where you don't expect to see casually overt forms of these things are films in which you expect to lose yourself in the quirky magic of quirky luuuuuurve.

So, it is a bit astonishing to find yourself knee-deep in race and gender stereotypes about 20 minutes into "Blended" when our lead operators end up on an impromptu vacation in South Africa with their respective familles.

Why South Africa, you might ask. And the answer to that is - where else would you find such a large number of quirky characters to set our quirky couple on the right path? Certainly not anywhere sane white people live.

Alright - let's start at the beginning. Jim Friedman (Adam Sandler) and Lauren Reynolds (Drew Barrymore) are scarred single parents who first meet on a blind date, and find that the other person's brand of weird is not their own, since that is basically what all rom-coms are about.

In a twist of fate, though, these two are also single parents who are both given a chance to take their kids to the same resort in South Africa at the same time. If you cannot guess every second of what happens next, you were probably born after 2000, and are watching this flick under parental guidance and your parents can tell you all about it.

When it comes to the basic plot, the whole thing is standard Sandler/Barrymore fare, and the waves of deja vu that hit come hard and fast. It isn't bad. It isn't really exciting, either. The typical funny lines are few and far between, and the kids are basically props.

However, there is something so very dated about the film that its attitudes towards race and gender leave you with a vaguely distasteful feeling. You see, what they're doing isn't that awful - by '90s standards when the black sassy lady was the staple character, and you went to the bartender for mind-blowing advice.

You probably noticed stuff like this in the older films our leads did, together or otherwise, but wrote it off as a product of the times. It is harder to do so in this one, especially because they are not nearly as charming, nor is the story engaging enough.

The background track is catchy enough, and the production values are as dated as everything else about the film.

If you're really in the mood for a rom-com, just google Drew Barrymore or Adam Sandler. Anything you hit upon will be more worth your time than this one.
Share. Save. Connect.
Tweet
BLENDED SNAPSHOT 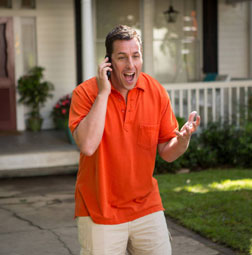 ADVERTISEMENT
This page was tagged for
Blended english movie
Blended reviews
release date
Adam Sandler, Drew Barrymore
theatres list
Follow @fullhyderabad
Follow fullhyd.com on
About Hyderabad
The Hyderabad Community
Improve fullhyd.com
More
Our Other Local Guides
Our other sites
© Copyright 1999-2009 LRR Technologies (Hyderabad), Pvt Ltd. All rights reserved. fullhyd, fullhyderabad, Welcome To The Neighbourhood are trademarks of LRR Technologies (Hyderabad) Pvt Ltd. The textual, graphic, audio and audiovisual material in this site is protected by copyright law. You may not copy, distribute, or use this material except as necessary for your personal, non-commercial use. Any trademarks are the properties of their respective owners. More on Hyderabad, India. Jobs in Hyderabad.