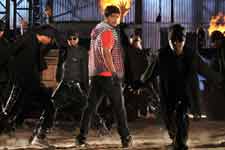 A family-funded project starring S V Ranga Rao's grandson, and calculated to set the late actor-wizard spinning in his grave, Mr. Seven is a film that shows you how it is possible to not inherit greatness. Or anything, for that matter.

Okay - so no one expects greatness (or anything, for that matter) from a debutant; but if you're in a film that is so low on quality that you're transcending criticism, all the while telling everyone you're related to SVR (who transcended criticism in his own way), it's going to get complicated.

Mr. Seven was so named because of a numerological sentiment dear to both SVR Jr and the character he plays in the film. His role in the movie is that of Lakshman, a car thief, for whom the number 7 is a lucky charm. He steals cars with license numbers with a 7, drives on roads numbered 7, and so on. Lakshman is being stalked by a bank robber ("India's most-wanted criminal", no less), Naik, because of his specific skill-set in car-stealing. Naik is planning a big heist, and is getting his team ready.

Meanwhile, Lakshman, who has inexplicably managed to get a girl fall for him (after 1 nos. "greeting card shop" scene and 1 nos. "creativity with Diwali fireworks" scene), has reformed. He now wants to start afresh in an honest profession by opening a restaurant - which he will, of course, fund with the money he will earn by selling a Mercedes Benz he plans to steal.

The Benz he eventually snitches happens to be the one Naik (who has successfully looted HDBC International Bank of Rs. 16 crores; 1 + 6 = 7 - get the connection?) has stashed his booty in. Naik furiously tries to trace his stolen car, with Lakshman clueless about the money. In the end, a fight between Naik and Lakshman sees the end of the former. After this, Lakshman starts his new line of work not by selling the Benz, but with the bank's moolah.

This dust-ball of a story not only looks like it was ripped off from a 9-year-old's entry to a story-writing contest, but is also executed with the finesse of a 3-year-old eating chalk. There's nothing in the movie that makes you empathize with the "hero" - not heroism, not good qualities, not looks, not the circumstances. This guy has been a random street-side loaf all his life, with not a single exceptional quality to speak of, and we are supposed to pretend like we care for him? Heck, even the climax fight is a fluke.

The chases and the suspense are amateurishly executed, and the romance is embarrassingly silly. The comedy in the movie works mostly because of Srinivas Reddy, but even in the humour department, there are lengthy, pointless scenes that serve no purpose at all.

It doesn't help that SVR Jr. is significantly out of place in front of a camera, looking strangely like he is unaware of what the requirements of a leading man are. He's placid and indifferent, and even the most basic of scenes seem to make him all self-conscious and stiff. The heroine has a role leading nowhere - she should have chosen an Allari Naresh film as her debut. The actor playing the villain probably had potential. Sravan, who plays the well-dressed sunglass-toting cop, looks good, and is easily the nicest thing about the movie.

The music is surprisingly decent. There is even an item song thrown in, if anyone cares. On the visual front, the movie looks like it was shot with hand-held camera.

In all, Mr. Seven is poor judgement by members of the SVR family. Surely not the way to tell the world you're related to someone famous.
Share. Save. Connect.
Tweet
MR. 7 SNAPSHOT 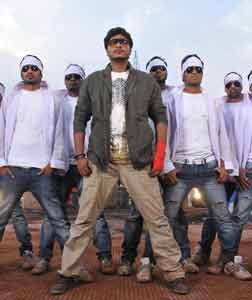 ADVERTISEMENT
This page was tagged for
mr 7 movie telugu
Mr. 7 telugu movie
Mr. 7 reviews
release date
S V Ranga Rao Jr, Neelam Upadhyay
Follow @fullhyderabad
Follow fullhyd.com on
About Hyderabad
The Hyderabad Community
Improve fullhyd.com
More
Our Other Local Guides
Our other sites
© Copyright 1999-2009 LRR Technologies (Hyderabad), Pvt Ltd. All rights reserved. fullhyd, fullhyderabad, Welcome To The Neighbourhood are trademarks of LRR Technologies (Hyderabad) Pvt Ltd. The textual, graphic, audio and audiovisual material in this site is protected by copyright law. You may not copy, distribute, or use this material except as necessary for your personal, non-commercial use. Any trademarks are the properties of their respective owners. More on Hyderabad, India. Jobs in Hyderabad.