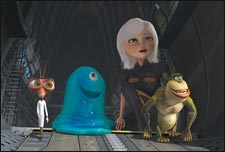 Sudhir Pai / fullhyd.com
EDITOR RATING
7.0
Performances
Script
Music/Soundtrack
Visuals
6.0
6.0
5.0
8.0
Suggestions
Can watch again
Yes
Good for kids
Yes
Good for dates
Yes
Wait for OTT
No
Monsters vs. Aliens is targeted at a group best described as neighbours' envy, owners' nightmare - 10-year-olds stranded at home during vacations. And Dreamworks, it appears, has just hit upon a secret cure. Collect several sci-fi movies like Independence Day, The Fly, Close Encounters Of The Third Kind, ET, and anything else you can name. Add humour elements from Shrek. Put the ingredients in 1-2-3 Maharaja Mixie. Blend it to pulp. Add movie spoof seasoning from Hot Shots. And voila.

On her wedding day, Susan Murphy (Reese Witherspoon) is contemplative outside the chapel when, all of a sudden, she doesn't know what hits her. Unlike other women who are known to have had similar experiences just before taking the nuptial vows, Susan's experiences are literal, with a meteor hitting her. And it changes her life forever.

She ambles into the ceremony, where she quickly expands to larger-than-life proportions - 50ft to be precise. And surprisingly, her wedding gown appears to stretch as far as the creator's imagination (it's a PG-13, remember?).

Now comes a group of men, very Agent Smithsonian in Armanis and Ray-Bans, who cut Susan to size in true Lilliputan tradition, and secretly transport her into a secret government facility, as made famous by MIB.

There she meets General W R Monger (Kiefer Sutherland), who is in charge of a group of thoroughly friendly monsters the government is detaining indefinitely. These include a bwa-ha-ha-ing mad scientist Dr. Cockroach (Hugh Laurie), a dumped frog prince Missing Link (Will Arnett), a one-eyed scoop of blue gelatin called BOB (Seth Rogen), and an all-encompassing mighty-cute Insectausaurus, who form a team as weird and animated as the one in The Wizard Of Oz. And soon, they set out to do what X-Men and Watchmen failed to do - Save Earth From Invading Aliens.

So our foursome is set free, under the direction of the essentially good General, to humour alien mastermind Gallaxhar (Rainn Wilson) and his clones and giant robots, in an outlandish battle of wits. Yes, it's predictable from here on.

That said, where Monsters vs. Aliens does triumph is with its impressive 3D. This technology has come a long way since Toy Story, and Monsters vs. Aliens is a great advertisement. What's better, it's less likely to give you a migraine, so you don't need to pop pills with your coke. Above all, it's a movie that you should enjoy with your children, or with the child in you.

So, if we'll be excused for being child-like, we'd willfully trade a movie critic's horn-rimmed spectacles for 3D glasses, if that option was available at IMAX. Sadly, that isn't the case. However, if Prasads does decide to release the 3D version, it's worth the wait.
Share. Save. Connect.
Tweet
MONSTERS VS ALIENS SNAPSHOT


Pros: The 4 main characters the dumbo US president.
Cons: Could've been funnier

ADVERTISEMENT
This page was tagged for
Monsters Vs Aliens english movie
Monsters Vs Aliens reviews
release date
theatres list
Follow @fullhyderabad
Follow fullhyd.com on
About Hyderabad
The Hyderabad Community
Improve fullhyd.com
More
Our Other Local Guides
Our other sites
© Copyright 1999-2009 LRR Technologies (Hyderabad), Pvt Ltd. All rights reserved. fullhyd, fullhyderabad, Welcome To The Neighbourhood are trademarks of LRR Technologies (Hyderabad) Pvt Ltd. The textual, graphic, audio and audiovisual material in this site is protected by copyright law. You may not copy, distribute, or use this material except as necessary for your personal, non-commercial use. Any trademarks are the properties of their respective owners. More on Hyderabad, India. Jobs in Hyderabad.