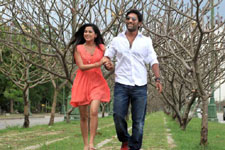 Kritika Deval / fullhyd.com
EDITOR RATING
3.0
Performances
Script
Music/Soundtrack
Visuals
3.0
2.0
5.0
4.0
Suggestions
Can watch again
No
Good for kids
No
Good for dates
No
Wait to rent it
No
So, what do you do when you find someone obviously murdered in a crashed car in Bangkok? Apparently, run with the million dollars you find in the backseat. And then get kidnapped and beaten up and cheated and god alone probably doesn't know either what else.

Not before you go around booking rooms in five star hotels all over Bangkok and hiding the cash in lockers in them, moving out of your "cheap and best" hotel room into a luxurious villa, getting it on with girls on the run from an arranged marriage, meeting the ex you screwed over for a rich bride, having the expected ladyboy encounter etc. etc. etc.

If you still wanna know more, it all starts with Sid (Bharat Kishore), Abhi (Vikram), Chai(Karthik) - no, he isn't called tea. It is just short for Chaitanya - going off to Bangkok on a "dirty, dirty bachelor party" for Chai. What follows is probably the lamest rendition of what passes of as "real" male repartee.

"What is the meaning of Bangkok?" asks the always-in-heat Sid. Seriously?

According to Race, "real" men apparently don't go five minutes without making not-very-well-veiled references to sex, women and their myriad parts, penises, and urination. No kidding. The aforementioned car crash happens while all three of them are peeing together on un-peed-on territory to seal their lifelong friendship.

"Those who eat together, sleep together, drink together and piss together live together. So let's PISS TOGETHER!" - thus wenteth the rousing speech by "sensible" Abhi before the trio went on with their little group activity.

If you pick apart the haphazard screenplay, the unnecessarily long character establishment (Yeah, we get it - Abhi's the nice one, Sid is the lech and Chai is the penny-pincher! Now get on with it already!), the obvious potholes in the pathway of logic, and the crass what-passes-for-humour; director and writer Raparthy has the makings of a neat little pot boiler.

The acting is competent enough. The music is breezy. The camera-work - although obviously low cost - is pretty good. We see the effort. We just don't like what it all ends up being.

Like many other "off-beat" independent filmmakers in recent times, the makers of Race try to draw in the crowds by over-compensating on crassness.

It doesn't work. It also cannot sustain the atrociously written lines and the dragging plot.

On the list of lost causes, Race isn't in the same league as, say, Mythri. You still wouldn't want to spend two and a half hours watching it in a movie hall, or even in the comfort of your home.
Share. Save. Connect.
Tweet
RACE (TELUGU) SNAPSHOT 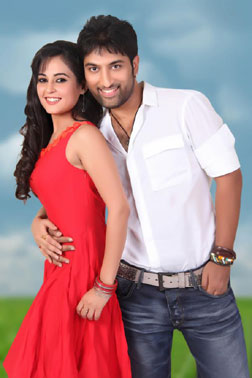 ADVERTISEMENT
This page was tagged for
Race (Telugu) telugu movie
Race (Telugu) reviews
release date
Vikram, Karthik
theatres list
Follow @fullhyderabad
Follow fullhyd.com on
About Hyderabad
The Hyderabad Community
Improve fullhyd.com
More
Our Other Local Guides
Our other sites
© Copyright 1999-2009 LRR Technologies (Hyderabad), Pvt Ltd. All rights reserved. fullhyd, fullhyderabad, Welcome To The Neighbourhood are trademarks of LRR Technologies (Hyderabad) Pvt Ltd. The textual, graphic, audio and audiovisual material in this site is protected by copyright law. You may not copy, distribute, or use this material except as necessary for your personal, non-commercial use. Any trademarks are the properties of their respective owners. More on Hyderabad, India. Jobs in Hyderabad.