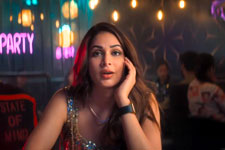 Sai Tulasi Neppali / fullhyd.com
EDITOR RATING
6.5
Performances
Script
Music/Soundtrack
Visuals
7.0
6.5
7.5
8.0
Suggestions
Can watch again
No
Good for kids
No
Good for dates
Yes
Wait for OTT
No
With his debut 2019 hit Matthu Vadalara, and now his second film Happy Birthday, director Ritesh Rana seems to be honing a distinctive brand of cheeky storytelling. Each of his movies is suffused with a societal sin. In Matthu Vadalara, it was drugs; in Happy Birthday, it is guns.

Set in a world where guns are as commonplace as phones, Happy Birthday - so named because Happy is the name of the protagonist and since the story takes place over the course of a single night of her birthday?- is a surreal comedy. Helpfully, the trailer of the movie defines the "surreal comedy" for us (a form of humour predicated on deliberate violations of causal reasoning, thus producing events and behaviours that are obviously illogical). But after two hours of sitting through the movie, that exposition reads like a weak excuse or an advance apology for the utter mayhem Rana tries to get away with.

Happy Birthday sets off on an explosively funny note. Minister of Defence Rithwik Sodhi (Vennela Kishore) passes a gun bill that allows, nay positively encourages, every citizen to carry a gun (a parody of America's gun madness?). Soon, gun culture permeates society, and bullets are sold by the kilo on every street corner. Sodhi attains cult status, his face plastered onto paintings of the Mona Lisa and Khaleesi.

At Sodhi's hotel, the Ritz Grand, security guards check bags and bar anyone who doesn't carry a gun ("No Gun, No entry"). In such a dystopian world, a girl called Happy (Lavanya Tripathi) goes out to celebrate her birthday. But the night disintegrates into a comedy of errors involving a dead body, a loan shark, a mute hotel cleaner, a couple of assassins and, yes, plenty of guns.

Happy Birthday's screenplay might have come straight out of the shredder. Using zig-zagging timelines, and flashbacks set inside flashbacks like Russian dolls, it confounds and frustrates, until you realize that the intention of the movie may be just as much. You'd be hard-pressed to recall the storyline at all once you leave the theatre. The right way to watch such a movie is by employing a goldfish's memory - by forgetting what has happened even a few minutes prior and relishing the joke of the moment.

A rabble of farcical side-characters further magnifies the mayhem in the story to epic anarchical levels. There are a cross-eyed handyman called Max Pain (Sathya), a couple of assassins called Serena and William, an old corrupt cop named Tiger Sheriff, and a loquacious crime-scene-cleaner called Uncle Fixit (Gundu Sudarshan).

But more than any single character or gag, it's the idiosyncratic visuals that bolster the movie and give it a distinctive charm. Saturated in a hazy neon glow, the outdoor locales are evocative of Blade Runner's futuristic aesthetic. Hotel Ritz Grand, where much of the story unfolds, towers the rest of the city by a mile, roads with names like Death Street leading into it.

Obsessive attention to detail is apparent in the way every surface of every room fits into its own peculiar theme. As the plot flips through contrasting locales - a palace-like prison, a shimmering nightclub called "Posh Pub", a neon-pink hotel room, and an executive office dipped in white?-?the visuals achieve a dream-like quality, apt for the absurdist plot.

If the visuals are the hero of the film, then the background score is the hero's best friend. Music director Kaala Bhairava's background score, a potent fusion of the old and new, of the percussive thrums of EDM music mixed with traditional veena sounds, complements the many elaborate physical and verbal gags in the movie.

Telugu cinema's man of the hour, Vennela Kishore, is the comedic giant on whose shoulders the movie rests. Kishore plays a hare-brained politician who is also a closet cross-dresser, secretly recording himself singing old romantic Bollywood songs, dressed in sarees and earrings. He pulls it off as only he can - with a natural charm and comedic timing par none.

But the breakout acting in the movie, the one that brings on fits of laughter in the audience, is in scenes involving a mute hotel worker, Lucky, and his sisters. Every so often, Lucky (played by Naresh Agastya), receives a video call from his three sisters, Rose, Rosa and Rosie (yep, Three Roses), on an App called SadChat, where they wail about their mother's dire health condition and implore him to send home money for her treatment. Agastya's top-notch acting, where he relies solely on his facial expressions as a mute, alongside that of his sister Rose's hammy performance, gives us one of the best gags of the movie.

On the flip side, the biggest dud of the crew is Lavanya Tripathi, who plays the protagonist Happy, and sucks the energy out of every scene she is in. Watching Lavanya attempt to make you laugh, you are reminded of just why comedy is said to be so hard to perform. It takes a special charm and subtlety of expression that her face seems wholly incapable of producing.

As a result of such uneven acting and perhaps one too many oddball characters, the movie never reaches that transcendental disorientation that surreal comedies are known for. Instead, watching Happy Birthday is akin to scrolling a Reddit page of memes, a mishmash of gags and puns, that only occasionally get you rolling in laughter.
Share. Save. Connect.
Tweet
HAPPY BIRTHDAY (TELUGU) SNAPSHOT 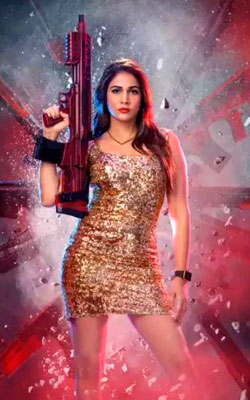 ADVERTISEMENT
This page was tagged for
Happy Birthday (Telugu) telugu movie
Happy Birthday (Telugu) reviews
release date
Lavanya Tripathi, Vennela Kishore
theatres list
Follow @fullhyderabad
Follow fullhyd.com on
About Hyderabad
The Hyderabad Community
Improve fullhyd.com
More
Our Other Local Guides
Our other sites
© Copyright 1999-2009 LRR Technologies (Hyderabad), Pvt Ltd. All rights reserved. fullhyd, fullhyderabad, Welcome To The Neighbourhood are trademarks of LRR Technologies (Hyderabad) Pvt Ltd. The textual, graphic, audio and audiovisual material in this site is protected by copyright law. You may not copy, distribute, or use this material except as necessary for your personal, non-commercial use. Any trademarks are the properties of their respective owners. More on Hyderabad, India. Jobs in Hyderabad.