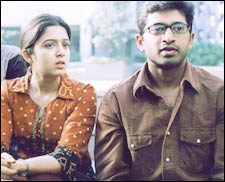 Sahasra (Charmy), a college student, lands up at a fancy Friday party ("more make-up, less clothes") where money and booze are flowing uncontained alongside things more malevolent. Unknowingly drugged at this do, Sahasra can remember nothing when she wakes up a full thirty hours later in her own bed. Starting with this accident, a series of bizarre events throws her life into complete disarray, not the least of which are the mysterious attempts on her life by a different stranger every other day. Who wants her dead and why?

To find out, you have to watch AOR of course, but we can tell you that it's a socially-aware serious film, rib-tickling situational comedy and supremely entertaining thriller, all for the price of one. In this latest work of cinematic genius, Yeleti treats the viewer to a touch of life in various strata of society.

It's hard to believe that in a single seamless story, penniless taxi drivers can co-exist with rain-drenched and appealingly innocent toddlers, struggling young singers can rub noses with the big spenders at their poolside parties and a suspended SI of police can turn his life around and finally crack a case involving a madman with a cult.

A mad menagerie of the oddest creatures, all of who come together for the briefest of moments to create havoc in each other's lives. But these aren't kiss-and-fly stops; instead, every character's actions, no matter how miniscule, are tied to the main thread eventually.

Technical finesse is right in the saddle along with bang for the buck. Nothing in this movie is out of place, revealing the staggering amount of effort and thought that has gone into this script. And the climax is the best of all - the jigsaw pieces hurled with reckless abandon at the viewer through the movie fall, as though bewitched, into a brilliantly unexpected pattern before your very eyes. Charmy, Sashank and Jagapathi Babu essay the lead roles with ease. You certainly don't find yourself waiting for this treat to end.

AOR is not a parallel cinema offering - it has its share of songs, dances and the all-important love triangle. But everything fits so beautifully that at no time at all does it seem burdensome. The songs by Keeravani are brilliant in themselves, but the experienced singers Sunidhi Chauhan and Shreya Ghosal turn them into sheer ecstasy. Enunciation, though, does take a severe beating. Not classics that will last a few generations, but certainly chart busters to last us a good while.

The absolute lack of clichéd twists in this plot is a stupefying delight. Every time you think you've got this movie figured out, the director stuns you by pulling a new hare out of his hat. Reminiscent of unexpected thrillers like Kshana Kshanam and Money, AOR is Telugu cinema at its new-age best. When we can pull off such wonders, why rehash the same old Tamil and Hindi scripts?

There's no last word on this movie, except that it will be in theaters for a blissfully long time. Long live great cinema.

ADVERTISEMENT
This page was tagged for
Anukokunda Oka Roju telugu movie
Anukokunda Oka Roju reviews
release date
Charmy, Sashank
theatres list
Follow @fullhyderabad
Follow fullhyd.com on
About Hyderabad
The Hyderabad Community
Improve fullhyd.com
More
Our Other Local Guides
Our other sites
© Copyright 1999-2009 LRR Technologies (Hyderabad), Pvt Ltd. All rights reserved. fullhyd, fullhyderabad, Welcome To The Neighbourhood are trademarks of LRR Technologies (Hyderabad) Pvt Ltd. The textual, graphic, audio and audiovisual material in this site is protected by copyright law. You may not copy, distribute, or use this material except as necessary for your personal, non-commercial use. Any trademarks are the properties of their respective owners. More on Hyderabad, India. Jobs in Hyderabad.