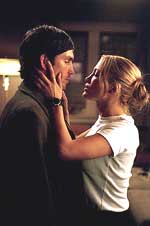 Smriti Kashyap / fullhyd.com
EDITOR RATING
5.0
Performances
Script
Music/Soundtrack
Visuals
NA
NA
NA
NA
Suggestions
Can watch again
NA
Good for kids
NA
Good for dates
NA
Wait for OTT
NA
The wonderful thing about most movies is that they never stun you into disbelief with anything new or unheard of. They are a rather considerate lot that keep playing the same 'Polly Wants A Cracker' theme over and over again, so that you don't lose your marbles when you see something new apart from love, sex and violence.

Angel Eyes falls into the Polly Wants A Cracker category, where you have seen the same situations, heard the same lines and felt disgusted at pretty much the same stuff. J Lo plays Sharon Pogue, a female Rambo cop who make Robocop look like he's been soaked in papier maché all day. One fine day she chances upon an enigmatic stranger Fetch - oh no, Catch (no kidding, that's his name) - who saves her life from a couple of rogue bullets.

Like I always say, there is no club sandwich without the cheese, so they soon become romantically inclined. Now this Catch guy is not your normal hero - he's a hero with a difference. He has a penchant for playing savior. In his musty, greasy overcoat, he walks the streets looking for car headlights that someone might have accidentally left on so that he can turn them off, stalks cops, and generally displays the usual Norman Bates kinda behavior.

Now Sharon is dying to know more about him - where he is from, what he does and the usual paraphernalia that all gals like to know about the ones they're cuckoo about. And this is when the feeling of creepiness sets in as the guy remains mum about his past.

The rest of the film crawls along and you stare like a goldfish in a bowl at the screen, waiting for something mushy and happy to happen. No such luck. James Caviezel, who plays Fetch - oops, Catch - is ingratiatingly ingratiating. He keeps staring straight at you through the film, and you half expect his head to spin around a la exorcist. J.Lo is okay, and she does her coply activities with all the aplomb of a pop star. These two have as much chemistry as a shoe and a comb. The only indication of a romantic scene, apart from the actors' vacant looks, was the background lovey dovey music. If it weren't for that, I wouldn't have known my tush from my elbow.

There are some glaring holes in the script, and you look away with a dignity that comes from watching about half a million lousy love movies from across the planet. J.Lo is all curious about her new love right, but she doesn't have the ticking brain of a cop to do a background search on him. She instead whines about him, whimpering for more details about his past. Sheeeshhhhh.

The film says it was kismat that brought them together: unfortunately for the filmmakers, our karma makes us leave the theater halfway. There is nothing in this flick that you should get all thrilled about and spend half your monthly patience on - it is strictly for those who can sit through just anything that claims to be romantic.
Share. Save. Connect.
Tweet
ANGEL EYES SNAPSHOT

ADVERTISEMENT
This page was tagged for
angel eyes movie review
Angel Eyes english movie
Angel Eyes reviews
release date
Jennifer Lopez, James Caviezel
Follow @fullhyderabad
Follow fullhyd.com on
About Hyderabad
The Hyderabad Community
Improve fullhyd.com
More
Our Other Local Guides
Our other sites
© Copyright 1999-2009 LRR Technologies (Hyderabad), Pvt Ltd. All rights reserved. fullhyd, fullhyderabad, Welcome To The Neighbourhood are trademarks of LRR Technologies (Hyderabad) Pvt Ltd. The textual, graphic, audio and audiovisual material in this site is protected by copyright law. You may not copy, distribute, or use this material except as necessary for your personal, non-commercial use. Any trademarks are the properties of their respective owners. More on Hyderabad, India. Jobs in Hyderabad.