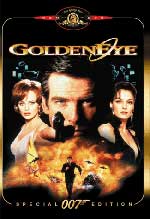 Ajay Bhashyam / fullhyd.com
EDITOR RATING
7.5
Performances
Script
Music/Soundtrack
Visuals
NA
NA
NA
NA
Suggestions
Can watch again
NA
Good for kids
NA
Good for dates
NA
Wait to rent it
NA
Whatever images a 'Bond movie' conjures up in your head, 'Golden Eye' has all of that and more. It's slicker, smoother and sexier. And to paraphrase a certain famous cricketer - 'Brosnan ka jawaab nahin!'. It may be his first but it sure won't be his last!

The story is pretty straightforward Bond stuff - 'Golden Eye' is a highly secret technology built by the Americans and Soviets together. It consists of a satellite dish that controls an instrument in space that in turn sends highly powerful electromagnetic pulses with high destructive capability. As expected, it falls into the wrong hands, and our man is called upon to save the world again.

It turns out that the mastermind is his nemesis - a former buddy who chose to work on the dark side. The mission takes Bond to Russia where he meets and rescues the beautiful Natalya, who worked at the Soviet center of Golden Eye. He also crosses paths with the sado-masochistic Xenia Onatopp, whose particular talent is, quite literally, squeezing the life out of her men!

Needless to say, Bond is shaken (by the baddies) and stirred (by Natalya) and still manages to come up trumps. There are some amazing action scenes including a great car chase right at the beginning. What's more, Brosnan gets to drive an army tank right through the middle of Moscow!

This movie also shows a soft side of Ian Fleming's strong and silent character - he actually falls in love with Natalya, and even mourns the death of a friend. Brosnan looks the part totally and he's going to make a name for himself as an excellent Bond.

The downside of the movie is that there are so many unrealistic and unbelievable scenes. In fact, sometimes it reminds you of one of our own desi movies where nothing can touch the hero, his gun is always loaded and he never falls off the edge.

Apart from the credibility factor, this is a must-watch movie. Oh yeah, did I forget the Bond Women? Fantastic, to say the least! Check out the future 007 - trust me, Brosnan is it!
Share. Save. Connect.
Tweet
GOLDEN EYE SNAPSHOT

ADVERTISEMENT
This page was tagged for
Golden Eye english movie
Golden Eye reviews
release date
Pierce Brosnan, Famke Janssen
theatres list
Follow @fullhyderabad
Follow fullhyd.com on
About Hyderabad
The Hyderabad Community
Improve fullhyd.com
More
Our Other Local Guides
Our other sites
© Copyright 1999-2009 LRR Technologies (Hyderabad), Pvt Ltd. All rights reserved. fullhyd, fullhyderabad, Welcome To The Neighbourhood are trademarks of LRR Technologies (Hyderabad) Pvt Ltd. The textual, graphic, audio and audiovisual material in this site is protected by copyright law. You may not copy, distribute, or use this material except as necessary for your personal, non-commercial use. Any trademarks are the properties of their respective owners. More on Hyderabad, India. Jobs in Hyderabad.