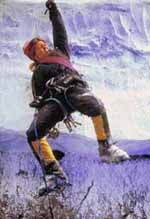 EDITOR RATING
5.0
Performances
Script
Music/Soundtrack
Visuals
NA
NA
NA
NA
Suggestions
Can watch again
NA
Good for kids
NA
Good for dates
NA
Wait for OTT
NA
'So you thought you might like to go to the show,
to feel the warm thrill of confusion that space cadet glow;
tell me is something eluding you sunshine,
is this not what you expected to see?'

- In The Flesh, Pink Floyd

It's a strange situation here. You see what you expected to see, but it's still a let down. It's a strange paradox, isn't it? Edge-of-the-seat stuff is what we expect to get from Vertical Limit, but edge-of-the-seat was never so bugging and boring. So, you get what you wanted, but there is a strange feeling that you got more than you wanted, and let me tell you, that's not always a good feeling. There are so many accidents happening, so much 'in-the-nick-of-time' stuff and so much sacrifice going on, that more than a thriller or one about pushing the limits, this one looks like a shoddily made tragedy.

Consider this: the opening sequence shows a trio - father, son and daughter - scaling a cliff and testing each other in trivia. A lapse of concentration and they all go for a free fall and now they are hanging on by the skin of, not their teeth, but some instrument. The father reckons it's too much weight and makes his son cut off the rope and falls to his death. In the last sequence, the brother is pulling out the sister from a pit where she has been stuck and along with her are two other guys. Again the weight's a lot and one of the guys just snaps the rope and the two fall to their death. These two instances of altruism contrive to enclose umpteen misadventures.

Some years after the first incident, the brother Peter Garrett ('O Donnell) is a photographer with National Geographic having given up climbing after the above incident, and the sister Annie (Robin Tunney) is an ace climber. Annie is a part of the team that's going to climb up K2, the highest point on earth. Some way down the path, the team gets news of an approaching storm and is asked to turn back. Not very heartening news for Elliot Vaughn (Bill Paxton), whose last such attempt was a botched one. He's not turning back, and takes the team into the storm. And it ends up in a chasm - not too deep, though.

The rescue team takes off and the guy heading is a veteran (Scott Glenn) who was a part of the same team as Elliot Vaughn's. Needless to say, there's some bad blood between the two. Also needless to say is that everyone except the siblings, Annie and Peter, and Peter's love interest, either fall to their death or are blown away.

From the arid rocks to the snow capped mountains, there's little by way of cheery stuff that comes our way. There is an increasing impatience that creeps in while watching Vertical Limit. Through the grim happenings, one is occasionally jolted by cheeky dialogues like 'I'm trying to kiss my ass goodbye'. These are at best mildly amusing, although the one cited here is rather ridiculous.

Chris 'O Donnell doesn't quite exhibit the energy levels he once did in Batman Forever. He is passable and so is the rest of the cast. Roshan Seth makes a guest appearance as a Pakistani Colonel.

So remember that the edge-of-the-seat isn't always very comfortable, especially if the fare is as cold (pun unintended) as this.
Share. Save. Connect.
Tweet
VERTICAL LIMIT (TELUGU) SNAPSHOT

ADVERTISEMENT
This page was tagged for
vertical limit dubbed telugu
vertical limit telugu dubbed movie
vertical limit movie in telugu
Vertical Limit (Telugu) telugu movie
Vertical Limit (Telugu) reviews
Follow @fullhyderabad
Follow fullhyd.com on
About Hyderabad
The Hyderabad Community
Improve fullhyd.com
More
Our Other Local Guides
Our other sites
© Copyright 1999-2009 LRR Technologies (Hyderabad), Pvt Ltd. All rights reserved. fullhyd, fullhyderabad, Welcome To The Neighbourhood are trademarks of LRR Technologies (Hyderabad) Pvt Ltd. The textual, graphic, audio and audiovisual material in this site is protected by copyright law. You may not copy, distribute, or use this material except as necessary for your personal, non-commercial use. Any trademarks are the properties of their respective owners. More on Hyderabad, India. Jobs in Hyderabad.