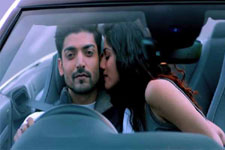 Kritika Deval / fullhyd.com
EDITOR RATING
3.0
Performances
Script
Music/Soundtrack
Visuals
5.0
2.0
6.0
7.0
Suggestions
Can watch again
No
Good for kids
No
Good for dates
No
Wait for OTT
No
So, we start off in Kashmir in winter and everything is beautiful, with beautiful people, too. And then the beautiful people open their mouths and your little bubble of beauty bursts as you realise that this truly is a product of the Bhatt camp. And by camp we mean campy.

The film is titled Khamoshiyan, and if only the film had fulfilled the promise of the title, we'd have been so very happy just to ignore that thing they tried to make that they think is a plot. At least up until the interval. You see, it all starts when Kabir (Ali Fazal), a writer, gets hit by the writers' block with a vengeance. The only thing for him to do now is apparently to retreat to the remote valleys of Kashmir and look for inspiration within its beauty. So, off he goes to a picturesque cottage in the literal middle of nowhere, with the beauteous Mira (Sapna Pabbi) to take care of him, along with a sick husband who is always locked up. Since no alarm bells go off in his head, we can only assume that the block hit him real hard, or that he's never seen a Bhatt film.

So creepily halcyon times ensue with the mask of the macabre creeping over it at an irritatingly slow pace. Hints are dropped of the horrors in store, and even though you have to struggle to withhold laughter everytime someone says something excruciatingly stupid, much fun is had in keeping your mind engaged in what the "secret" within Meyer's unfortunately infrequent "khamoshiyan" might be.

And you're dreading the big reveal as it turns out to be everything you feared it would be. Just, ugh.

So, you have an oversexed femme fatale whose sexuality has nothing to do with the plot and everything to do with the enthusiastic sheet tango our protagonists play. You have an intense writer type who is being played by an actor who can actually act and therefore doesn't fit in. You have a convoluted plot that you know the ins and outs of far faster than you expected. There's blood and there's gore and naked body parts just everywhere. And none of it is either shocking or amusing, unless you're in the mood to be amused, in which case it is all quite hilarious.

Ali Fazal looks great, and, as we mentioned, struggles the struggle of the talented when put in a spot where talent is threatened with being drowned out by inane noise. Sapna Pabbi is gorgeous, and has all the expression of someone who's felt the wrath of Medusa. She shows flashes of thespic prowess as well, but then she has to say something like, "These silences hide my secrets", which is apparently the only line that stuck with us.

The music is great, as usual, playing foil to the stunning camera work. The blood, though? We have one word - ketchup!

Khamoshiyan is just all of the things you thought it would be, without the slightest variation. Pick out just about any Bhatt film and the only difference you'll find is the faces. On the other hand, the music does get you sleepy, so there's that.
Share. Save. Connect.
Tweet
KHAMOSHIYAN SNAPSHOT 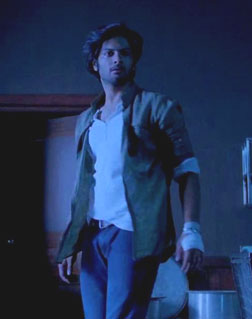 ADVERTISEMENT
This page was tagged for
Khamoshiyan hindi movie
Khamoshiyan reviews
release date
Gurmeet Choudhary, Ali Fazal
theatres list
Follow @fullhyderabad
Follow fullhyd.com on
About Hyderabad
The Hyderabad Community
Improve fullhyd.com
More
Our Other Local Guides
Our other sites
© Copyright 1999-2009 LRR Technologies (Hyderabad), Pvt Ltd. All rights reserved. fullhyd, fullhyderabad, Welcome To The Neighbourhood are trademarks of LRR Technologies (Hyderabad) Pvt Ltd. The textual, graphic, audio and audiovisual material in this site is protected by copyright law. You may not copy, distribute, or use this material except as necessary for your personal, non-commercial use. Any trademarks are the properties of their respective owners. More on Hyderabad, India. Jobs in Hyderabad.