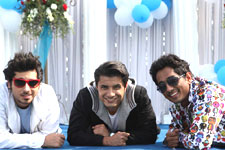 Nupur Barua / fullhyd.com
EDITOR RATING
5.0
Performances
Script
Music/Soundtrack
Visuals
6.0
5.0
5.0
8.0
Suggestions
Can watch again
No
Good for kids
No
Good for dates
Yes
Wait for OTT
Yes
Roger Ebert, unarguably the most influential film American film critic for more than four decades, made a general comment on Hollywood remakes once. He said that most remakes were the equivalent of being "teabagged" (sexually violated) by Hitler"s monkey. Coincidentally, he died on the day that we were given our nth remake from the Indian film industry, at a time when tampering with a classic is at an all-time high.

Sai Paranjpe has been in the news recently, vehemently opposing the new Chashme Baddoor by David Dhawan. She need not have bothered. The current Ali Zafar starrer is, if anything, a re-interpretation of her original content, and the two movies have very little in common in terms of plot.

Sid (Ali Zafar), Jay (Siddharth) and Omi (Divyendu Sharma) live together as paying guests in this one huge room with a balcony, in Goa. Omi spends his time reciting bad poetry; Jay is always auditioning, even when nobody is watching; and Sid is, well, just the nice guy who lives with them. It is never made clear exactly why they are there, but it may have something to do with studying in a college.

The three of them owe restaurant-owner Joseph (Rishi Kapoor) money. Again, it is not clear why they borrowed from him.

They also owe their landlady Josephine (Lilette Dubey) a year"s rent. Despite countless reminders, the three are indifferent to the possible consequences of not paying up. Even Sid, who is supposed to be the responsible one.

Omi and Jay spot, from their wide balcony of the villa they still live in, Seema (Tapsee Pannu). She is walking her dog. Both are overcome by an overwhelming urge to ensnare her in a web of romance. And meanwhile, there is Sid.

David Dhawan is a man for the masses. Most of today"s filmmakers pale in comparison when it comes to senseless humour, and they would all agree that Dhawan is an inspiration. And many Dhawan fans will now realise that what made his movies successful is the presence of Govinda (well, for most of his successful films). Trying to recreate the same aura with Ali Zafar and others is near impossible.

Willing suspension of disbelief is a given in Dhawan"s films. So expecting a logical story flow or even a credible plot line is futile. Slapstick humour is the only aspect that anybody watching a Dhawan film expects to see. The characters are supposed to keep the audience in splits. Does Chashme Baddoor manage that? No.

For one, the jokes are flat. And two, overacting is a skill, and Govinda is one of the few people who can make it look convincing.

Ali Zafar is poker-faced in the face of all that nonsense. He underplays his role, and mumbles most of the time. He is a decent actor here, but slightly overshadowed by the others, by virtue of their OTT performances alone. Siddharth is terrific, in a nutshell. Divyendu Sharma is very talented. However, these three together do not have the required chemistry to make their relationship convincing.

Rishi Kapoor is endearing in parts, and so is Lilette Dubey. Their love story has the word "Chamko" in it.

Tapsee Pannu, on the other hand, is so busy trying to be the cute girl-next-door that she forgets to act. She has to stop smiling so much.

Anupam Kher revisits his Dil Hain Ki Manta Nahin days, with his exaggerated expressions and loud deliveries. Bharti Achrekar is a grandmother who can beat up young boys, and she does it with relish!

Shot in Goa, Chashme Baddoor does not lack colour, but the overall look of the film is very similar to Rohit Shetty films. The cinematography is effective, and the costume design is put together well. The production design uses embellishments to prove that this is what Goa looks like, but also ignores simpler spaces like the college auditorium. The most distracting detail in the visuals is the appearance of the extras - they look like they were digitally transferred from Dhawan"s earlier (90s) movies.

Some of the music is catchy, and Dhawan pays tribute to the late 80s and most of the 90s with the number Dhichkyaaoon Doom Doom - catchier than Early Morning and Har Ek Friend Kamina Hota Hain (the ones you always see in promos) - and the dance routine is refreshing and nostalgic.

Chashme Baddoor is made for the masses, and will find many takers. For the ones who want to be a snob about it, there is good news - the original (spelt differently - Chashme Buddoor) has been re-released this weekend. Given the buzz that the movie has created over the past few months, it can be safely assumed that the older movie will get its audience, too. Watch the new one only if you can accept that there will never be another Govinda again, and that humour is not judged by intellect (so do not be surprised when person sitting next to you in the dark theatre is overcome by spasms of laughter with dialogues like, "When you can"t change the girl, change the girl", or "Dum hain, boss".

In the meantime, Roger Ebert lived long enough to give us his opinion on remakes, but it is unlikely that he could have sat through this one. May his soul find peace, and may we learn to accept that this is the best we can get with remakes and remixes.
Share. Save. Connect.
Tweet
CHASHME BADDOOR SNAPSHOT 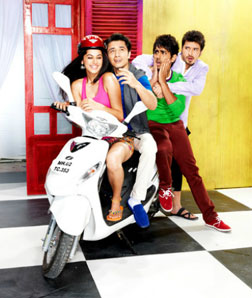 ADVERTISEMENT
This page was tagged for
chashme baddoor telugu movie
Chashme Baddoor hindi movie
Chashme Baddoor reviews
release date
Ali Zafar, Siddharth
Follow @fullhyderabad
Follow fullhyd.com on
About Hyderabad
The Hyderabad Community
Improve fullhyd.com
More
Our Other Local Guides
Our other sites
© Copyright 1999-2009 LRR Technologies (Hyderabad), Pvt Ltd. All rights reserved. fullhyd, fullhyderabad, Welcome To The Neighbourhood are trademarks of LRR Technologies (Hyderabad) Pvt Ltd. The textual, graphic, audio and audiovisual material in this site is protected by copyright law. You may not copy, distribute, or use this material except as necessary for your personal, non-commercial use. Any trademarks are the properties of their respective owners. More on Hyderabad, India. Jobs in Hyderabad.