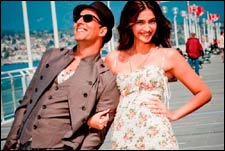 Thank You is yet another assembly-line Akshay Kumar commodity. Big stars, big locales, big budgets, big yawns. And Irrfan Khan' wry sarcasm - even if he's playing the least likeable character in the flick - is what draws more sniggers than all of the cast's antics put together.

Akshay Kumar plays a Kishan, private eye who's hired to help expose Sanjana's (Sonam Kapoor) husband Raj's (Bobby Deol) adulterous ways. Also in the plot are Raj's friends Vikram (Irrfan Khan) and Yogi (Suneil Shetty), the former of which is the biggest creep among the 3. Vikram is not only good at extra-marital hanky-panky, but also treats his wife (Rimi Sen) like she were a pimple that showed up on the tip of his nose on the day of his big date with Carla Bruni.

Every time Raj gets caught, Vikram teaches him how to indignantly cover his behind and proclaim utter innocence and chastity. This is Thank You's primary source of laughs - the duo's frantic attempts to stay safe despite Kishan's calculated ways to dig them out.

So out go the witty lines and wacky complications, and in saunters emptiness filled with simpering wives and loser husbands. What's really not funny is how Sanjana keeps pining over Raj despite his ample display of creep-like qualities: he gets offended when Sanjana confronts him with his moonlighting, shows little remorse at his own folly, and marches off to shoot the man she's about to marry. Anees Bazmee winds it all up with a cheesy climax that pulls apart whatever little was set up.

Akshay Kumar's clearly enjoying himself doing not much (save romancing hot babes in dimly-lit dance bars and atop swanky yatchs). The chases and stunts are cool though. Suneil Shetty is relegated to a miserable role, but Irrfan bags most of the good parts.

Rimi Sen is really good in an unfortunately inconsequential part as Vikram's harassed wife, and why Celina Jaitley disappears after a few scenes is not clear. Sonam Kapoor is more a vehicle for her eager fashion stylist than an actress. We won't even know if she has great comic timing - there are only about 3 emotions she needs to show in this flick, and she seems to have a long way to go before she can catch up with actresses (and we're not talking about Katrina Kaif) in this genre.

Mallika Sherawat's item song is fun, but the film gets done with it way too soon. Plush Canadian locales form the backdrop to this film, and the stratospheric production values mean this is a good-looking watch mean only one thing - the cast and crew of this movie had their share of fun, and are not about to bend over backwards to help you get yours now. Unless you love Akshay Kumar to bits, this one's not spelling Happy Holidays.
Share. Save. Connect.
Tweet
THANK YOU SNAPSHOT

ADVERTISEMENT
This page was tagged for
Thank You hindi movie
Thank You reviews
release date
Akshay Kumar, Sonam kapoor
theatres list
Follow @fullhyderabad
Follow fullhyd.com on
About Hyderabad
The Hyderabad Community
Improve fullhyd.com
More
Our Other Local Guides
Our other sites
© Copyright 1999-2009 LRR Technologies (Hyderabad), Pvt Ltd. All rights reserved. fullhyd, fullhyderabad, Welcome To The Neighbourhood are trademarks of LRR Technologies (Hyderabad) Pvt Ltd. The textual, graphic, audio and audiovisual material in this site is protected by copyright law. You may not copy, distribute, or use this material except as necessary for your personal, non-commercial use. Any trademarks are the properties of their respective owners. More on Hyderabad, India. Jobs in Hyderabad.