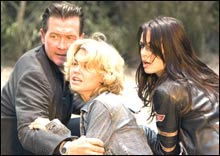 Srilakshmi Chodavarapu / fullhyd.com
EDITOR RATING
5.0
Performances
Script
Music/Soundtrack
Visuals
NA
NA
NA
NA
Suggestions
Can watch again
NA
Good for kids
NA
Good for dates
NA
Wait for OTT
NA
When 'the Doctor of Thugonomics' debuted in a match with Kurt Angle in WWE, I said to my brother, "This guy is no ROCK!" And I say it today, "This guy is no ROCK." He is not even close.

The Marine is the second film from the new arm of Vince McMahon's entertainment empire, WWE Films. John Cena plays John Triton, a Marine stationed in Iraq, pink-slipped after he disobeys orders - "No time!" he snaps - and single-handedly saves some hostages and dispatches a cadre of bad guys.

What follows is a wild explosive action romp. Whizzing bullets, lots (and I mean lots) of stuff blowing up, big guns, fistfights, careening cars, bloody WWE-style fights (no FU though) with stomping, kicking, body-slamming and bodies leaping or thrown through glass or wooden walls, and even alligators… and in the end the good guy wins. Whoops, did I just give away the ending?

Yes, the story. Triton returns to his wife in the United States. Once home, after being discharged for his actions, he struggles to settle into civilian life. Taking a road trip, he and his wife (Kelly Carlson) stop at a gas station where they have an altercation with a group of lame-o diamond thieves.

Robert Patrick is Rome, the leader of our gaggle of bickering thieves. In no time the baddies have kidnapped the wife, taken Triton's truck and, for good measure, blown up the station. Now, how they suddenly have time to peruse magazines at a quickie mart, don't ask me.

From there the action becomes a fairly standard chase-through-the-deluge adventure set to music you'd find in a video game. With explosions. Lots of them.

Robert Patrick is a criminally underrated actor. He owns every scene he is in. Cena pulls off the big stunts and is good at appearing nothing other than determined. He lacks the wry self-deprecation, and then he is no ROCK.

The one thing that struck me, pretty early, was just how much stuff they blow up in 90 minutes. It seems like every few minutes something new is getting shot sky high, and I mean sky high. Half the budget must have gone towards explosives. The explosions are absolutely massive - as they need to be, to create a distraction from how generic the movie is as a whole.

Triton pursues the thieves in a beat-up cop car, withstanding a hail of automatic gunfire as he barrels down the highway. The car takes about a thousand bullets and sheds all kinds of parts, but Triton keeps driving. He would've had no problem sticking his feet out of the bottom of the car and running it himself, Flintstones style.

Wait, there is more. In about the 1/8th second this is happening, the baddies climb out of their car and machine gun John's spinning vehicle. Whew. Okay, John deals with all that, but now he is on foot armed only with a knife. By the way, no "You can't see me!" thing after this. Ha ha.

Still and all, I enjoyed the entertainment value that The Marine brings to the table and that's the bottom-line… Already used to the lame acting and the unbelievable stories of WWE, we'll probably like this. Everyone needs a guilty pleasure, why!

ADVERTISEMENT
This page was tagged for
the marine
The Marine english movie
The Marine reviews
release date
John Cena, Robert Patrick
Follow @fullhyderabad
Follow fullhyd.com on
About Hyderabad
The Hyderabad Community
Improve fullhyd.com
More
Our Other Local Guides
Our other sites
© Copyright 1999-2009 LRR Technologies (Hyderabad), Pvt Ltd. All rights reserved. fullhyd, fullhyderabad, Welcome To The Neighbourhood are trademarks of LRR Technologies (Hyderabad) Pvt Ltd. The textual, graphic, audio and audiovisual material in this site is protected by copyright law. You may not copy, distribute, or use this material except as necessary for your personal, non-commercial use. Any trademarks are the properties of their respective owners. More on Hyderabad, India. Jobs in Hyderabad.