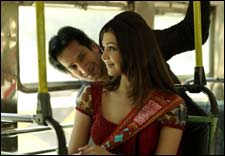 Nupur Barua / fullhyd.com
EDITOR RATING
3.0
Performances
Script
Music/Soundtrack
Visuals
5.0
4.0
5.0
5.0
Suggestions
Can watch again
No
Good for kids
No
Good for dates
No
Wait to rent it
No
Say what you will about Ram Gopal Verma, the man knew how to portray the underworld - think Satya - without extreme expletives. In fact, any director worth his salt will cite Ramu as a huge influence, especially when it comes to the genre of mafia movies.

Ankush Bhatt is definitely heavily inspired by RGV, but the comparison ends there. Bhindi Bazaar Inc is yet another gangster movie (read - an attempt at "intelligence") that comes nowhere close to contemporary classics such as Satya and Black Friday.

To begin with, a young man named Tez (Gautam Sharma) rides a motorbike from his world (Bhindi Bazaar) to one beyond his reach (Malabar Hills), just 7 kilometers away. He enters a mansion, spots a chess set, and, before you can say 'Mamu!', sits down to a game opposite a moustached, slick-haired mystery man (Kay Kay Menon). Why, you ask? How else is the director supposed to co-relate every move in the game with some random incident in the young man's life? Clever, you think.

Tez and his childhood friend, Fateh (Prashant Narayanan), grow up in the alleys of Bhindi Bazaar, which has the dubious distinction of being the hotspot for the underworld. Mamu (more a title/rank than a name), played by Pawan Malhotra, rules a certain area, and these 2 are affiliated with the man who smokes no less than 2 bidis/cigarettes together, whenever he lights up. This is the Muslim camp.

A little farther away, Pandey (Piyush Mishra) runs the enemy Hindu camp, with the headquarters above a row of buffalo sheds (notice the tribute to Satya). At some point, a vague reference is made to a riot that Pandey may have been a victim of, but otherwise, all that the 2 camps seem to be concerned with are marking their territories (a la Josh). However, since the 2 men in Malabar Hills are still playing chess, you know there is more to this than meets the eye.

Like all gangster movies, Bhindi Bazaar Inc has the components necessary to the genre. Here are a few of them, for the uninitiated (including some that Ankush Bhatt has added/introduced):

• 2 rival groups - and to categorise them according to faith is the icing on the cake
• One corrupt cop that plays one group against the other
• One long-suffering, silent wife (Deepti Naval, who has 3 lines of dialogue)
• One slutty girl who sleeps her way to the top (Vedita Pratap Singh and an ample bosom)
• One life-altering incident that surpasses all other life-altering incidents
• Aerial view of the city, different angles
• Smart dialogues, such as "Main Mamu banna chahta hoon" accompanied by a crazed look
• One jaded star, looking for a comeback (Jackie Shroff)
• Junior artistes (girls) pretending to be transvestites
• Many new actors, quickly forgotten (Shweta Verma, for one)
• One ill-fated love story
• One silent lover, living with unrequited love (Shilpa Shukla, who looks scary)
• Chase/running sequences through the narrow lanes
• Many betrayals and twists, and inane reasons for them
• One item number (this time, featuring Caterina Lopez, better known as J Lo's cousin - one minute in a saree from the Dresswala down the road, the next in see-through lingerie)
• An absurd mother-of-all-twists at the end
• And last, but not the least - abuses prefixed with relatives such as mother and sister, accompanied by some liberal peppering of words related to private parts and what one can do with them - interestingly, when it comes to the reference of one's mother's body part, the censors insert a bleep.

And if you manage to sit through Bhindi Bazaar Inc, you may want to ignore sloppy typos such as 'dressmens' and 'lightmens', in the end credits. If you still want to watch a gangster movie, revisit Ramu, of the pre-Aag days.
Share. Save. Connect.
Tweet
BHINDI BAAZAAR INC SNAPSHOT

ADVERTISEMENT
This page was tagged for
bhindi baazaar inc full movie online
bhindi bazaar inc full movie
Bhindi Baazaar Inc hindi movie
Bhindi Baazaar Inc reviews
release date
Follow @fullhyderabad
Follow fullhyd.com on
About Hyderabad
The Hyderabad Community
Improve fullhyd.com
More
Our Other Local Guides
Our other sites
© Copyright 1999-2009 LRR Technologies (Hyderabad), Pvt Ltd. All rights reserved. fullhyd, fullhyderabad, Welcome To The Neighbourhood are trademarks of LRR Technologies (Hyderabad) Pvt Ltd. The textual, graphic, audio and audiovisual material in this site is protected by copyright law. You may not copy, distribute, or use this material except as necessary for your personal, non-commercial use. Any trademarks are the properties of their respective owners. More on Hyderabad, India. Jobs in Hyderabad.