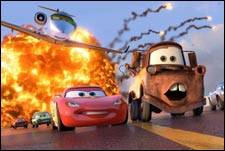 Nupur Barua / fullhyd.com
EDITOR RATING
7.0
Performances
Script
Music/Soundtrack
Visuals
8.0
7.0
7.0
8.0
Suggestions
Can watch again
Yes
Good for kids
Yes
Good for dates
Yes
Wait for OTT
No
Whoever thought that a movie about talking cars would become the highest-grossing film of Paul Newman's career? Cars (2006) was such a big hit that Pixar decided on a sequel a while ago. With the deaths of Paul Newman and co-director Joe Ranft (who, eerily, died in a car crash before he could participate in the success of the movie), and other unforeseen events, it took Pixar 5 years to finally present Cars 2 to the world.

In typical Pixar style, the movie begins after a short film - based on characters from Toy Story 3. Taking the original story forward, Cars 2 goes international. Lightning McQueen (Owen Wilson), the racing car of no pre-determined breed, has put Radiator Springs back on the map, as he promised. He still participates in various races, and displays his trophies at the Doc Hudson Museum, in memory of his mentor (played by Paul Newman in the first movie).

Life seems ideal, till an arrogant Francesco Bernoulli (John Turturro), a Formula racing car, challenges McQueen to defeat him at the first World Grand Prix, organized by Miles Axlerod, the billionaire who wants the world to accept his bio-fuel as an alternative to the more expensive fuel available. McQueen accepts, and, against his better judgement, takes Mater along with him to the race that spans Japan, Italy and England.

Since the first movie already dealt with McQueen's coming-of-age, Cars 2 concentrates on the relationship between him and Mater. Mater discovers that he is not just a rusty truck that other cars laugh at, and McQueen realises how much Mater means to him.

Before that, all of them embark on a joyride that involves sly villains, international spies and special agents, global cuisines, sightseeing, fancy toilets, fancier seminars, a special television camera, and a conspiracy that threatens the existence of genuine spare parts. On another level, the entire movie is a spoof of most spy movies from the 1960s and 1970s, with private jets, ships and gadgets galore.

Larry, as Mater, clearly steals the show. He is the hero in this sequel, and even manages to get the girl. The movie revolves around his journey from a bumbling idiot to somebody who saves the world. Michael Caine and Emily Mortimer, as the international special agents who join wheels with him, are outstanding as well. This has to be Caine's best role in a long time, reminiscent of his days as a dashing young spy in the 1970s, and you can hear the passion and nostalgia in his voice.

Owen Wilson performs well, but he and the others have relatively smaller roles in Cars 2. All of them are essential to the plot, though. The visuals are outstanding, especially in 3D. The car races and other action keep you on the edge of your seat. And the end credits, shot in 2D animation, are worth waiting for.

A must-watch, even it seems to drag once in a while, Cars 2 is best appreciated if you already know the story of Cars, to understand the dynamics better.
Share. Save. Connect.
Tweet
CARS 2 (3D) SNAPSHOT

ADVERTISEMENT
This page was tagged for
Cars 2 (3D) english movie
Cars 2 (3D) reviews
release date
Owen Wilson, Larry the Cable Guy
theatres list
Follow @fullhyderabad
Follow fullhyd.com on
About Hyderabad
The Hyderabad Community
Improve fullhyd.com
More
Our Other Local Guides
Our other sites
© Copyright 1999-2009 LRR Technologies (Hyderabad), Pvt Ltd. All rights reserved. fullhyd, fullhyderabad, Welcome To The Neighbourhood are trademarks of LRR Technologies (Hyderabad) Pvt Ltd. The textual, graphic, audio and audiovisual material in this site is protected by copyright law. You may not copy, distribute, or use this material except as necessary for your personal, non-commercial use. Any trademarks are the properties of their respective owners. More on Hyderabad, India. Jobs in Hyderabad.