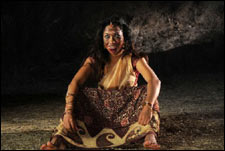 Harika Vankadara / fullhyd.com
EDITOR RATING
1.0
Performances
Script
Music/Soundtrack
Visuals
2.0
1.0
1.0
2.0
Suggestions
Can watch again
No
Good for kids
No
Good for dates
No
Wait for OTT
No
The posters of Saitan, with a suitably made-up female face intending to horrify, pasted all across the city, prepare you for 3 hours of a bone-chilling narrative. And the first 2 minutes of the movie are all it takes for you to realize that Saitan is yet another film that hits the audience below the belt with grossly-misleading publicity.

This alleged chiller kickstarts with a highly unconvincing murder of a lascivious intoxicated youngster by the ghost of a girl called Swapnika (Kusum Arora). The victim's girlfriend, who, in her limited screen space comes across as a better actor than all the women with the plum roles in the film, is driven crazy by the murder scene.

Jyoti (Akarsha), the heroine, steps into the melee with her handicapped niece, a banal past and a penchant for skimpy one-piece dresses. A road accident has claimed the lives of her sister and her brother-in-law, and has disabled her niece. Jyoti travels to Kunali (the countryside residence of the ghost) in search of a certain herb that is supposed to cure her niece.

The hero Murali (Santosh Samrat) makes his entry, with his sidekick proclaiming him to be the only person around with the ability to drive by Kunali's graveyard (which is conveniently placed at the only entry point to the village) unscathed. And indeed, the ghost even plants a kiss on his cheek - one that leaves a lipstick mark, no less - while he drives past the cemetery.

Murali and Jyoti, predictably, fall in love, and the former shimmies up a Photoshopped waterfall, thereby becoming the only person to ever climb up a waterfall and live to tell the tale. Jyoti then loses her clothes in what is supposed to be a quick-sand pit, and proceeds to make an impromptu dress of leaves, only to have a herd of goats unleashed at her.

The 2nd half of the story reveals that Swapnika's prethatma is tethered to the world to quench her thirst for revenge and for her bava Murali. Turns out that a gang of 4 guys and a woman, all lecherous, had killed her while attempting to "gang rape" her, soon after she saves one of the men from a snake bite. Swapnika's spirit thus embarks on a mission to present a gruesome death to each member of the gang, occasionally using Jyoti's body as the medium.

Lusty men, women and ghost, cleavage, belly and crude sex jokes reign the film. A bajji bandi and a clothes store spring up in the middle of nowhere, with a couple of trees forming the backdrop. And what is a transformer doing in a region that looks like a wasteland without any electric lines overhead in sight?

The pictures that grace compound walls and billboards are the only frames of horror in the movie. Kusum Arora, sporting white contact lenses, is light years away from delivering a blood-curdling performance, and the work of the make-up artist is wasted. Only the jack-in-the-box entries of lunatics jerk the audience.

None of the protagonists put up a persuasive act. Jyoti's rendition of "sir sir tanu naatho misbehave chesadu," to SI Kankusam, reminds you of a 5-year-old complaining "daddy daddy tanu naa lollipop kottesadu."

Babu Mohan, who plays an impotent man, is not suitably exploited in this film, and Satyam Rajesh is the only actor who manages to elicit a few laughs from the audience.

The background scores have blatantly been plagarised from various movies, and the track of Ek Taara jumps at the audience. There are, fortunately, no songs to speak of.

The climax has an irrational, irate spirit being preached to by a professor (played by Melkote, who morphs from a herbologist to a psychiatrist over the course of the film) about true love, and Swapnika ascending to heaven in an angel-like fashion.

The script has more holes than a sieve, and you need an IQ as small as the grains that sift through one to be able to sit through this film.
Share. Save. Connect.
Tweet
SHAITAN (TELUGU) SNAPSHOT

ADVERTISEMENT
This page was tagged for
Telugu Saitan movie songs
saithan telugu full movie download
saithan Telugu movie
saitan sex com
shaitan movie telugu
Follow @fullhyderabad
Follow fullhyd.com on
About Hyderabad
The Hyderabad Community
Improve fullhyd.com
More
Our Other Local Guides
Our other sites
© Copyright 1999-2009 LRR Technologies (Hyderabad), Pvt Ltd. All rights reserved. fullhyd, fullhyderabad, Welcome To The Neighbourhood are trademarks of LRR Technologies (Hyderabad) Pvt Ltd. The textual, graphic, audio and audiovisual material in this site is protected by copyright law. You may not copy, distribute, or use this material except as necessary for your personal, non-commercial use. Any trademarks are the properties of their respective owners. More on Hyderabad, India. Jobs in Hyderabad.