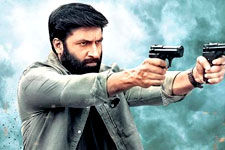 Josh / fullhyd.com
EDITOR RATING
5.5
Performances
Script
Music/Soundtrack
Visuals
6.0
5.0
5.0
6.0
Suggestions
Can watch again
No
Good for kids
No
Good for dates
No
Wait to rent it
Yes
The 5s and 5.5s in this reviewer's ratings tend to imply moderately good work while being relatively inoffensive. Like, say, Bhaagamathie and Lacchimdeviki Oka Lekkundi. The relative inoffensiveness is rather key. But Chanakya's 5.5 doesn't belong in this mould. The film is extremely offensive and dull work. For a while. The whole of the first half in fact.

Arjun (Gopichand) is an "emotional" spy who is trying to rein in a criminal/terrorist/don/some-kind-of-Pakistani-powerful-villain called Qureshi (Rajesh Khattar) whose son (Upen Patel) is a worse criminal/terrorist/don/some-kind-of-Pakistani-powerful-villain, also called Qureshi. After a mishap, Arjun and his teammates are put undercover. Arjun joins State Bank of Delhi in a job that requires him to harass people by calling them and exhorting them to take a loan or credit card that they don't need at all. If, like us, you know the sheer annoyance of having to field five of these calls on any given day, you know he's getting on a lot of nerves there.

After two bad calls he gets so pissed off that he starts yelling at the next person he calls, the heroine (MEHreen). She is justifiably upset and shows up at the bank telling the manager of what happened. After the manager brings up the employees responsible, the hero and sidekick (Sunil) further berate her instead of owning up to their mistake. The girl, expectedly furious by now, asks the manager to close all her accounts in the bank. Apparently she's a hotshot entrepreneur whose company means great business for the bank, and so the manager threatens to fire his employers unless they get back her business.

The hero then stalks the girl ceaselessly until she gives in. If that isn't bad enough, the attitude these guys wear is cringe dyed in crimson red. Almost every sentence they speak is dipped in contempt for the girl and her friends. And to think that it's their fault to begin with! Just why would any of this pass for comedy or romance is a question whose answer lies in the sniggers of the guys sitting next to the reviewer (one of whom was explaining to the other that the villain guy is Dawood Ibrahim).

If you aren't offended enough, we'll have you know the girl then falls for the guy in the most despicable of circumstances. Her dog is a "jaati kukka" (Kill us! Quick!) which is squealing in the heat of the mating season. The vet (a characteristically crass Ali) tells her the dog either needs to mate or needs to be neutered. The girl reacts like a standard south-Indian male and just won't hear any of this removal of balls. So, the only option is to mate the dog with another "jaati kukka" (sigh... can't they just bore us to death instead?). And apparently, in the entire city of Delhi only this bank employee and his sidekick have the suitable partner dog. And he doesn't want his dog to be bred.

So. So the vet tells the heroine that she needs to excite the dog's owner sexually to make him understand the pain of her own dog. (Yes. We asked them to kill us - not do us doggy style.) Agreeing with the great logic in that idea she dresses up in a saree and makes the moves on the hero. He rejects her. She falls in love with him. And declares it loudly in public. (We died. A painful violent death.)

In this way, Chanakya is offensive to women, entrepreneurs, and, miserably, even dogs. And there is something strangely familiar about this insane stalkpalooza. It felt like we'd seen this kind of film before. Specifically, this flavour of misogyny. The stalking, the falling of the high-achieving girl for what seems to be a total moron, and the elated declarations of love of the girl to that moron. While misogyny is an organic, essential, and much-relished ingredient of the Telugu movie masala, this flavour here is not from around here. It's distinctly Tamil.

The director, Thiru, is Tamil, and he's made a couple of decent potboilers in Tamil. As anyone with some exposure to Tamil cinema will know, stalking scenes are a (w)rite of passage for the Tamil film writer/director. While Selvaraghavan (7G Brundavan Colony) is the permanent minister-in-charge, you'll see that so much Tamil film writing, right from the boilerplate (Shankar with Shivaji) to the auteur (Vetrimaaran with Aadukalam) involves this kind of harassment as a key component of romance.

This Tamilness, however, changes gears in the second half into something much less offensive and much more enjoyable: Competence. The good thing with Tamil directors is they don't go onto the sets of a film until they're sure they have something competent to offer. It might not be something you might enjoy but it'll be at least something that the director personally cares about. This is in sharp contrast to the common strategy of Telugu cinema of recycling the same tropes, trusting one's film in the hands of stars, dance masters and action directors, and finally coming up with tripe that nobody cares two dog testicles about.

Thiru makes a very commercial, very illogical, but also rather competent thriller in the second half. The hero's friends are abducted and housed in Karachi by the evil Qureshi's son who challenges the hero to come collect his friends. The Indian government wants to have nothing to do with these abducted men, and the hero is now alone in his efforts to retrieve them.

The schemes of the hero are filled with as many holes as the bodies of the spies would be if they ever tried these schemes. But, Thiru knows to build a tense scene. While we were still weary from the events of the first half, we couldn't help but sit up and follow as every ploy is decided, troubled, and yet executed in a gripping manner. Thiru has clearly seen many Netflix spy series and films, and joyfully borrows many tropes. But the point is just copied tropes don't build tension, the director does. And this director does.

It is only in the second half that we understand what drew Gopichand to the film. He is as earnest as they come, and this film needed that earnestness in its numerous chase sequences, and patriotic proclamations. Gopichand makes it all work.

Further, the second half actually manages to redeem itself in the women's department. No, the heroine is still as dumb as a dodo (we wish she were also as dead as a dodo). This (insufficient but positive) redemption comes from Zarine Khan, playing item girl, Watson, and James Bond. As the film enters the zone where titillation is no longer a priority and building of plot and tension is, Zarine Khan's character saves the hero's life and supports him ably in multiple schemes, and, take a deep breath, she even acts! She probably had a smaller paycheque than the heroine, but she should take heart from the fact that we appreciated her far more than any other character in the movie.

In this quite Tamil concoction of misogyny and competence, Thiru makes a film that is both infuriating and engaging. If you aren't like the sniggering men who richly appreciate a girl being put in her place, you might benefit from walking into the film in the intermission.
Share. Save. Connect.
Tweet
CHANAKYA SNAPSHOT 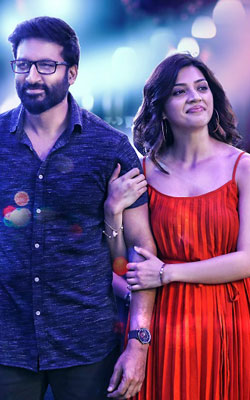 ADVERTISEMENT
This page was tagged for
gopichand chanakya fullhyd
chanakya.movie Hindi
chanakya movie reviews
Chanakya telugu movie
Chanakya reviews
Follow @fullhyderabad
Follow fullhyd.com on
About Hyderabad
The Hyderabad Community
Improve fullhyd.com
More
Our Other Local Guides
Our other sites
© Copyright 1999-2009 LRR Technologies (Hyderabad), Pvt Ltd. All rights reserved. fullhyd, fullhyderabad, Welcome To The Neighbourhood are trademarks of LRR Technologies (Hyderabad) Pvt Ltd. The textual, graphic, audio and audiovisual material in this site is protected by copyright law. You may not copy, distribute, or use this material except as necessary for your personal, non-commercial use. Any trademarks are the properties of their respective owners. More on Hyderabad, India. Jobs in Hyderabad.