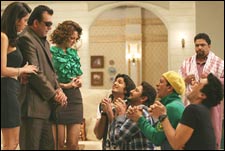 Nupur Barua / fullhyd.com
EDITOR RATING
5.0
Performances
Script
Music/Soundtrack
Visuals
5.0
5.0
5.0
5.0
Suggestions
Can watch again
Yes
Good for kids
Yes
Good for dates
Yes
Wait to rent it
No
Charity may begin at home, but chances are, you may regret it. In Dhamaal, the four idiots and the fallen cop had willingly, and reluctantly, donated their dubiously earned crores to an orphanage. And now they all blame each other for it.

That is where Double Dhamaal starts. Roy (Riteish Deshmukh), Boman (Ashish Chowdhry), Adi (Arshad Warsi) and Manav (Jaaved Jaaferi) bemoan their near-bankruptcy by waiting at the turn of the road where they had met with that fateful billionaire. Since this does not seem to be working, they take all their frustration out on each other.

And then they see Kabir (Sanjay Dutt), who seems to be a billionaire himself. This irks them, considering that Kabir had also donated his share of money for the greater good of homeless children. To make matters worse, he seems to be married to a hot Kamini (Mallika Sherawat), and has a hot secretary, who turns out to be his sister, Kiya (Kangna Ranaut).

Incensed, the four friends decide to blackmail Kabir into making them partners in his seemingly successful venture. And then con follows con, and soon you are wondering who started this confused roller-coaster ride in the first place.

Some of the gags in Double Dhamaal are seriously funny - well, they can certainly elicit a giggle. But to enjoy it fully, you have to leave your brains behind. Part of the reason is that performances vary - for example, almost all the actors in Double Dhamaal mimic other actors, but some are brilliant (Riteish), while some are really bad (Ashish).

Also, while the four jokers have some fun moments, they are always screaming out their lines - to make them funnier, you quickly realize. That can get a bit annoying after a point, especially with Arshad. Jaaved is the most understated, and even he appears to be overacting.

Then, somehow, there is a gorilla act, again. It's surprising how the writers never seem to tire of this - it was not funny the first time, whichever movie it was.

Also, almost every scene is a spoof on some movie or the other, the most obvious being Guzaarish. And finally, of course, there are the bad disguises and the worse puns.

Kangna does what she has to, but she appears slightly jaded, especially with her wig-like hairstyles. Mallika looks more elegant than her, even when she performs her item numbers. Satish Kaushik is funny, and his accent as a bhai is spot-on. He calls the boys "B-grade films ke side-heroes" and other similar names, all the time - it feels like the truth. Sanjay Dutt is bland - he was funnier in the first installment.

The music is typical - hip-hop meets bhangra meets rap. There is never any reason to break into a song, but the timing for each one is predictable. No great stuff there, but watch the end credits till they get over - there is one song, and a gag reel, totally worth the two-and-a-half hours of mixed feelings.

Double Dhamaal is a one-time watch, for sure. Like we said, just make sure you leave your brains and other sensibilities behind. And if you can ignore the gorilla act, maybe you can watch it again.
Share. Save. Connect.
Tweet
DOUBLE DHAMAAL SNAPSHOT

ADVERTISEMENT
This page was tagged for
dubal dhamal movie watch
Double Dhamaal hindi movie
Double Dhamaal reviews
release date
Sanjay Dutt, Arshad Warsi
Follow @fullhyderabad
Follow fullhyd.com on
About Hyderabad
The Hyderabad Community
Improve fullhyd.com
More
Our Other Local Guides
Our other sites
© Copyright 1999-2009 LRR Technologies (Hyderabad), Pvt Ltd. All rights reserved. fullhyd, fullhyderabad, Welcome To The Neighbourhood are trademarks of LRR Technologies (Hyderabad) Pvt Ltd. The textual, graphic, audio and audiovisual material in this site is protected by copyright law. You may not copy, distribute, or use this material except as necessary for your personal, non-commercial use. Any trademarks are the properties of their respective owners. More on Hyderabad, India. Jobs in Hyderabad.