The Cabin In The Woods Review 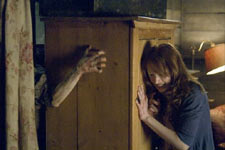 Nupur Barua / fullhyd.com
EDITOR RATING
6.0
Performances
Script
Music/Soundtrack
Visuals
5.0
6.0
4.0
6.0
Suggestions
Can watch again
No
Good for kids
No
Good for dates
No
Wait to rent it
No
Joss Whedon has a cult following, but the man is apparently looking for some more adulation. Producer of The Cabin In The Woods, Whedon has taken the genre of horror, added science-fiction and mythology, and then made a movie so bizarre that it almost seems like a litmus test for all his fans. And those who come out grinning at the ingenuity of the film are going to be Whedon's sworn followers for life.

Before you run to the theatre to watch The Cabin In The Woods, be warned that it is a commentary on horror flicks - it is almost a parody of itself, and you need not shut your eyes every 2 minutes. There are no huge shocks or path-breaking twists. What you see is what you get, and you have to pay close attention to the dialogues to understand what on earth happens to the people in the story.

The movie begins with 2 elderly geeks, Sitterson (Richard Jenkins) and Hadley (Bradley Whitford), who chat about ordinary things even as they prepare for a project that can make or break the world. They rush to a huge control room inside an even bigger laboratory, to inaugurate the project. It is not clear what the agenda of the experiment is, but it is made clear that other countries have their own versions in progress at the same time.

They are headed, in a van, to a cabin in the woods, for the weekend. They stop for gas just before entering the deep woods, and the man (Tim de Zarn) in charge of the gas station is not only rude and obnoxious, but downright creepy.

After much fun and frolic in the afternoon, the group settles down for a round of party games, and accidentally discover a cellar. Curiosity gets the better of them as they ignore Marty's pleas to get out of there, and they explore the dim area that is stocked with paraphernalia from another era.

To put it simply, the youngsters are a part of an experiment. Their movements and consequent troubles are monitored closely by the geeks. The purpose of this research/trial is revealed towards the end, but by the time the movie gets to that point, your mind has concocted a thousand possible scenarios, and you become immune to the blood and the gore. That is the beauty of the film - a flawed script that you ignore, because you are human, voyeuristic and secure, as long as all those things do not happen to you; and plenty of violence.

The acting is average in the film. Fran Kranz, however, manages to steal the show with his pothead insights and presence of mind. The geeks, Richard Jenkins and Bradley Whitford, are the stars of the film, literally, and even though they are the bad guys, you cannot help but sympathise with them at times.

The cabin is not too creepy, by horror movie standards. Nor is the music, although it is predictable. The production design is simple, for a movie this complicated, and that adds to the drama. The make-up and prosthetic artistes have done a credible job with all those faces - none of them looks overdone.

Watch The Cabin In The Woods even if you do not have a very strong stomach for brutality - it will leave you wanting more, despite the weird climax. Spoiler - do not expect the same standard as a Quentin Tarantino film, and you may just end up being a Joss Whedon fan.
Share. Save. Connect.
Tweet
THE CABIN IN THE... SNAPSHOT
THE CABIN IN THE WOODS SNAPSHOT 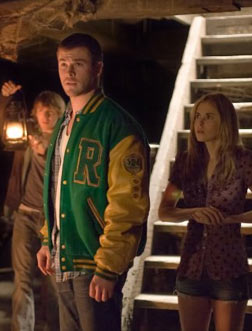 ADVERTISEMENT
This page was tagged for
The Cabin In The Woods english movie
The Cabin In The Woods reviews
release date
Chris Hemsworth, Kristen Connolly
theatres list
Follow @fullhyderabad
Follow fullhyd.com on
About Hyderabad
The Hyderabad Community
Improve fullhyd.com
More
Our Other Local Guides
Our other sites
© Copyright 1999-2009 LRR Technologies (Hyderabad), Pvt Ltd. All rights reserved. fullhyd, fullhyderabad, Welcome To The Neighbourhood are trademarks of LRR Technologies (Hyderabad) Pvt Ltd. The textual, graphic, audio and audiovisual material in this site is protected by copyright law. You may not copy, distribute, or use this material except as necessary for your personal, non-commercial use. Any trademarks are the properties of their respective owners. More on Hyderabad, India. Jobs in Hyderabad.