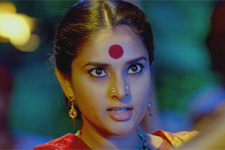 Ajay Kumar R / fullhyd.com
EDITOR RATING
4.0
Performances
Script
Music/Soundtrack
Visuals
3.0
3.0
4.0
3.0
Suggestions
Can watch again
No
Good for kids
No
Good for dates
No
Wait for OTT
Yes
Arundhati director Kodi Ramakrishna makes his directorial debut in Sandalwood with the much-awaited Nagabharanam (or Nagarabhavu in Kannada), which, incidentally, is the third Kannada film of that name, all starring late Kannada actor Vishnuvardhan.

During her previous birth, Manasa (Ramya) was Nagamma, a warrior-princess of a bygone order that protected an ancient relic which, as per myth, belongs to Nataraja (Lord Shiva), and is the idol of Adishesha around His neck. Anyone in possession of the artefact will wield powers of cosmic proportions. And the only way to access all that "energy" is through soul-stirring music devoted to Lord Shiva.

But great power draws great evil, and so a demonic shaman, Kapali (Rajesh Vivek), wants to tap into the relic's powers. After several skirmishes and wars over it, Kapali traps and kills Naganika, despite her being protected by a divine incarnate of the Lord's Adishesha. In the process, Kapali loses the sacred ornament.

Centuries later, Nagamma reincarnates as Manasa who houses the spirit / soul of the serpent that protected her, and is on a mission to find the relic. The artefact, which is housed in a museum in Delhi, is now, due to its legend, an award given to the best musicians and performers at a national-level music competition. Manasa, being aware of this, must win the competition as it is the only way to win back her family heirloom (there is a condition that it cannot be stolen). So she approaches a music band, which is also performing at the fest and is supposedly the best in the nation. She meets its lead singer (Diganth Manchela) and becomes part of the band after showcasing her hidden abilities.

But there is a hindrance in achieving this mission. The anti-faction, led by a corporate tycoon and the film's antagonist (Mukul Dev), comes to know of this and wants to wield the relic's power. In order to do this, they must try and eliminate the competition (Manasa's band). The story is about how Manasa and the spirit that inhabits part of her soul together get hold of the relic and vanquish the villains.

Unlike director Kodi Ramakrishna's 2009 blockbuster Arundhati, which had a talented star cast, powerful music, gorgeous battle choreography, a blood-curdling villain, and a really gory and thrilling script, Nagabharanam offers zilch. The film treads a rather illogical path. Throughout the first half, it proposes a way to defeat "evil" through music and dance, but that later turns out to be a VFX-controlled battle (and a wannabe one at that). Also, the protagonist decides to produce the music necessary to activate the artefact by playing at a competition, where each of their songs sounds like a painful cacophony you would hear at the India's Got Talent auditions on TV - or even worse, your college Karaoke fest. Why use music as means to awaken God when your symphony would probably fail to impress even Kirron Kher? Also, surprisingly, Manasa's band is the only visible competitor there.

The movie also brings in a lot of stupid onto the platter. There is a scene where the antagonists almost kill nearly all the members of the band, but the latter die anyway due to deliberate medical negligence. The cringe in that scene is so bad it's nearly good.

The film tortures you with embarrassingly artificial emoting from Manchela and the rest. Lead protagonist Ramya / Divya Spandana is probably the only one worth mentioning as her expressions are slightly above average for nearly 20 minutes in the second half. But even she does a half-hearted job in other scenes.

The VFX, cinematography (Venu) and makeup are all substandard and, in some places, overdone, and make Chota Bheem look awesome. The VFX team's attempt to reincarnate actor Vishnuvardhan through graphics is abysmal. They also try to emulate scenes from Baahubali in a war sequence, which is again an epic fail with the overuse of graphics and awful slo-mo cams.

The music (Guru Kiran) is unimpressive and deadbeat. The story makes the harmony out to be rousing, but it is nowhere near even fun.

Kodi Ramakrishna has to do something phenomenal to bounce back from the rock bottom that he hits with this movie - after Avatharam and now this, Arundhati appears to be almost an accident. Watching this one would get even Vishnuvardhan spinning in his grave.
Share. Save. Connect.
Tweet
NAGABHARANAM SNAPSHOT 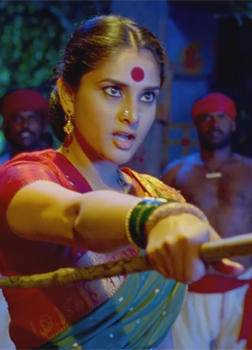 ADVERTISEMENT
This page was tagged for
nagabharanam telugu full movie online
nagabharanam telugu full movie
Nagabharanam telugu movie
Nagabharanam reviews
release date
Follow @fullhyderabad
Follow fullhyd.com on
About Hyderabad
The Hyderabad Community
Improve fullhyd.com
More
Our Other Local Guides
Our other sites
© Copyright 1999-2009 LRR Technologies (Hyderabad), Pvt Ltd. All rights reserved. fullhyd, fullhyderabad, Welcome To The Neighbourhood are trademarks of LRR Technologies (Hyderabad) Pvt Ltd. The textual, graphic, audio and audiovisual material in this site is protected by copyright law. You may not copy, distribute, or use this material except as necessary for your personal, non-commercial use. Any trademarks are the properties of their respective owners. More on Hyderabad, India. Jobs in Hyderabad.