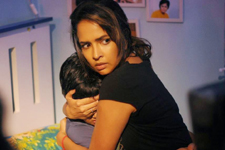 Kritika Deval / fullhyd.com
EDITOR RATING
3.5
Performances
Script
Music/Soundtrack
Visuals
6.0
3.5
5.0
5.5
Suggestions
Can watch again
No
Good for kids
No
Good for dates
No
Wait to rent it
Yes
Rakesh (Sreedhar Rao) and Pooja (Manchu Lakshmi) are your typical yuppie family trying to do what living things do best - flourish and propagate. To this end, they are both busy professionals with a daughter and a son. The latter, Bunny (Prem Babu), they understandably want to mould to their own image of what their child should be. Bunny, however, has ideas of his own, aka ADHD (if you're a hippie "kids are people too" kind of person), aka lazy brat who just needs some fear knocked into him (if you're the typical Indian parent).

After a lot of whinging and crying and making us feel bad for the kid, along with Manchu Lakshmi (who makes it very difficult for you to view her as the character) putting her heart and soul into clichés, the two, who are apparently parents living in this decade in a city without having a list of favourite kiddie shrinks on Practo, decide to pack him off to boarding school.

This, as it turns out, isn't the best idea, because the kid is alone, prone to "acting up", and in a film that does nothing to hide the fact that we have ghosties and ghoulies waiting for us. The kid runs back home, and then boring weirdness ensues.

Those who say they get scared by "horror" flicks don't quite have an excuse anymore, as the ones that we have today generate feelings of dread only in so far as the fate of cinema is concerned. With a plot involving an "abnormal" kid (since when is ADHD an abnormality anyway?), you could do anything. Here are a few ideas right off of the top of our heads:

1) Have the possessed kid be smart about having a ghost pal. He's got ADHD, not anencephaly. Have him get better grades, go after the mean pal, and all the other stuff that kids are definitely devious enough to come up with.
2) Don't have ghosts. Turn the kid into a little serial killer who eventually finds redemption.
3) Have possessed people who get just about any super power other than "bonelessness".
4) Have his ADHD turn into a super power as he goes around half-assedly saving the world via his ghost-boosted attention-deficit creativity.

As you can see, we're not particularly good at this. But, we don't make boatloads of money turning centuries-old dream logic into soporific slideshows of tired tropes. We just make very small amounts of money telling you people how boring this stuff is.

Budugu, sadly enough, starts off sensibly, with two parents with differing ideas on the personhood of the little people we are biologically bound to bring into this world because autonomy is an illusion. It isn't long, though, before you realize that this "different" beginning is merely meant as a segue into the whole innocence and evil trope, replete with the scared maid-servant, the shadows, the dead dogs, the bizarre postures, and, of course, the child psychologist that our filmmakers keep confusing with exorcists.

Despite its relatively short run-time, Budugu's lack of structure and its makers' novelty allergy make it seem at least a hour longer than it is. Boredom - the true supernatural evil...

The performances by both Manchu Lakshmi and Sreedhar Rao are genuine and sincere, but the bland cynicism with which the premise is mined constantly hacks dimensions off of their characters. The children are okay, and are as usual supposed to be sad personality-deficient innocents who's sole purpose of existence is to justify the world's evil.

The cinematography is shockingly mediocre, considering the number of mediocre films we've seen lately with much lesser star power that were shot really well. The editing takes at least some of the blame for giving us at least a half hour too much. The music and the background tracks are just earfuls of meh. 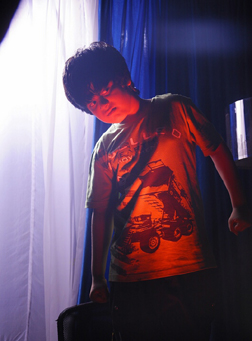 ADVERTISEMENT
This page was tagged for
Tumse Zindagi Jis Din Tumhe korechi Tumi Kore Bhalobasha budugu kg
Budugu telugu movie
Budugu reviews
release date
Lakshmi Manchu, Sreedhar Rao
Follow @fullhyderabad
Follow fullhyd.com on
About Hyderabad
The Hyderabad Community
Improve fullhyd.com
More
Our Other Local Guides
Our other sites
© Copyright 1999-2009 LRR Technologies (Hyderabad), Pvt Ltd. All rights reserved. fullhyd, fullhyderabad, Welcome To The Neighbourhood are trademarks of LRR Technologies (Hyderabad) Pvt Ltd. The textual, graphic, audio and audiovisual material in this site is protected by copyright law. You may not copy, distribute, or use this material except as necessary for your personal, non-commercial use. Any trademarks are the properties of their respective owners. More on Hyderabad, India. Jobs in Hyderabad.