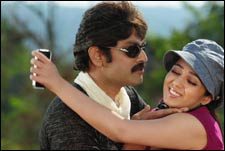 Aparna K / fullhyd.com
EDITOR RATING
3.0
Performances
Script
Music/Soundtrack
Visuals
7.0
3.0
6.0
4.0
Suggestions
Can watch again
No
Good for kids
No
Good for dates
No
Wait for OTT
Yes
Idealism is charming as long as it doesn't let naivete dilute it. Nagaram Nidra Potunna Vela is one of those "activist" films that wants to showcase the muck in society and send out a loud call for action. While it is undeniably a film with both a purpose and a large heart, it allows itself to sink into mediocrity, and then sinks further in.

It is the kind of flick, which, after spending 2.5 hours analyzing the complex web of corruption ingrained in our political system, wraps it up all with a scene that shows a mob killing the politicians with machetes and swords.

Niharika (Charmme) is an earnest TV reporter who wants to use journalism to benefit society, and has to deal with a boss who insists on making money through "sensational news". Humiliated by her boss, she decides to do a story on what happens in the city at night, and ventures out on her beat.

She is taken aback by the city out there, as she discovers the existence of pubs, booze, drugs and prostitution. However, her problems started even before she started from home that night - in her bag is a pen-camera that contains incriminating evidence against a top politician.

There also exists in the script, for no major reason except to mouth a few cynical lines about society, an alcoholic (Jagapathi Babu) who Niharika makes friends with during her night out. One misadventure after another, Niharika finds herself in the midst of a flaring political drama played by evil scheming netas.

The makers have tried to wrestle with a bunch of issues with Nagaram Nidra Potunna Vela, but none of them sees a fitting conclusion. Even though the script boasts of some good dialogues and interesting observations (although we did find a line copied from Vedam), the overall feel to the movie is that of B-grade cinema.

Nagaram Nidra... is predictably pessimistic about the "evils of society". The vision of pubs as a haven for the drug-starved; and of a city being an open red-light area teeming with sleazy eve-teasers and sleazier policemen is unrealistic. There's also an Anna Hazare style dharna at a Gandhi statue and a subsequent police lathicharge worked into the script, all with sorry consequences.

Charmme is a good actress, with a very real quality about her, and whether she does films like these out of choice or compulsion, we'll never know - but she should get back in action in the top league. Jagapathi Babu, too, should start doing better films.

Ahuti Prasad is in an easy role as Niharika's boss, and a few other actors do a good job as well. Chandramohan surprises all with his brief appearance as a highly ethical politician. The cast includes a sizeable number of amateur actors.

The songs have been worked hard at, and a few of them sound good, especially the semi-classical number with Charmme's dance steps. The visuals are mostly average.

In all, this one is a film that can boast of having intended to be different, but intent is never the sole breadwinner of a product.
Share. Save. Connect.
Tweet
NAGARAM NIDRA POTUNNA VELA SNAPSHOT

ADVERTISEMENT
This page was tagged for
Nagaram Nidra Potunna Vela telugu movie
Nagaram Nidra Potunna Vela reviews
release date
Charmme, Jagapathi Babu
theatres list
Follow @fullhyderabad
Follow fullhyd.com on
About Hyderabad
The Hyderabad Community
Improve fullhyd.com
More
Our Other Local Guides
Our other sites
© Copyright 1999-2009 LRR Technologies (Hyderabad), Pvt Ltd. All rights reserved. fullhyd, fullhyderabad, Welcome To The Neighbourhood are trademarks of LRR Technologies (Hyderabad) Pvt Ltd. The textual, graphic, audio and audiovisual material in this site is protected by copyright law. You may not copy, distribute, or use this material except as necessary for your personal, non-commercial use. Any trademarks are the properties of their respective owners. More on Hyderabad, India. Jobs in Hyderabad.