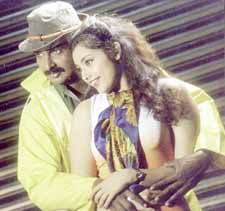 The cine vigilantes have spewed yet another one. And this one has been semi-dubbed, semi-remaked from a Tamil equivalent. After you sit through Mass (not that you should be sitting through Mass in the first place), you wonder whether it was worth all the trouble. And to top it, Srihari came to watch the movie with his wife. I wonder how their marriage is coming along.

The story is twisted, convoluted, tangled, complicated... just pick up a Norman Lewis, will ya! The actors have been obviously chosen and cast with deference to lungpower. And the director for once gets to bash up the baddies. 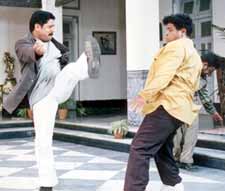 Alex (Arun Pandiyan) is wronged. Actually, the story of the wronging is shown only after the intermission, but a chronological analysis will blow up your patience to kingdom come. So, Alex is wronged. As is usual in the movies, it is something related to his sis. And he's been wronged by two of his friends - Joseph, who he finishes off in the first reel, and Anna Raghu, who is finished off in the last reel. Some symmetry, this.

Joseph and Raghu are also involved in a food scam. And so the CBCID is involved and CID inspector Ratnakar (Vijaykanth) is the only capable one. Not saying much about India, are we. He is put in charge of:

1. Catching the guys behind the scam
2. Catching the murderer of Joseph
3. Harping on patriotism and all that whenever the script is found lacking
4. Shooting the baddies when they don't listen to what he's saying 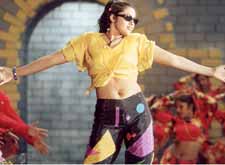 He manages to do it all, belly in tow. And after the interval, he has one more belly as company. Lawyer Chakravarthy (Srihari), who is good at downing lagers, singing in the street and making a mockery of the courts. Chakri however has a small role, and once he is swung off the screen, Ratnakar and Alex do the pow-wowing, and thus the movie ends.

The first half is almost bearable. The story looks even probable as long as you drag on a couple of joints before the movie. But after the interval, even a comatose man would protest. The performances are great if you are looking for some clear shots of celebrity tonsils. The entire movie is one sanctimonious assault on the audience. And the most illogical part is, they show Americans towing away our grain from the black market. I guess our filmmakers found an explanation for America's food surplus at last. 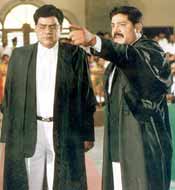 There are a few questions left unanswered, which I shall address now:

Q. Why is a lawyer involved?

A. Technically speaking, to get Alex out of jail for the first murder so he can finish off the second guy. But Srihari's performance hinted at some very intriguing and mysterious reasons.

Q. What is Meena's name doing in the cast list? A. Good question. We should ask Meena. She seemed to have been wandering around the sets when the movie was made, and was caught by mistake in a couple of the scenes.

Q. Why is this movie called "Mass"?

ADVERTISEMENT
This page was tagged for
Mass telugu movie
Mass reviews
release date
Vijaykanth, Arun Pandiyan
theatres list
Follow @fullhyderabad
Follow fullhyd.com on
About Hyderabad
The Hyderabad Community
Improve fullhyd.com
More
Our Other Local Guides
Our other sites
© Copyright 1999-2009 LRR Technologies (Hyderabad), Pvt Ltd. All rights reserved. fullhyd, fullhyderabad, Welcome To The Neighbourhood are trademarks of LRR Technologies (Hyderabad) Pvt Ltd. The textual, graphic, audio and audiovisual material in this site is protected by copyright law. You may not copy, distribute, or use this material except as necessary for your personal, non-commercial use. Any trademarks are the properties of their respective owners. More on Hyderabad, India. Jobs in Hyderabad.