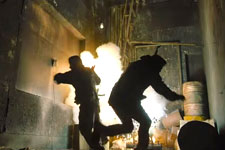 Punarvasu Pendse / fullhyd.com
EDITOR RATING
4.5
Performances
Script
Music/Soundtrack
Visuals
5.0
5.0
3.0
5.0
Suggestions
Can watch again
No
Good for kids
No
Good for dates
No
Wait for OTT
Yes
Blank opens with a desperate man, stuck in a desert with nary a chance of escape, facing almost certain death. While we do not encourage exaggeration, we did feel while watching this one like we were also desperate, and stuck in a desert(-ed theatre) with nary a chance of escape (we could have, but who'd review this movie then?). Debutant director Behzad Khambata has an interesting plot concept, in which a suicide bomber loses his memory and has a bomb attached to his chest. The execution, however, is flawed at best.

ATS chief Diwan (Sunny Deol) and his team are on high alert after an accident victim is found with a bomb strapped to his chest. The man has no recollection of his identity, but systematically and efficiently dispatches the guards at the hospital he is imprisoned in, and you are thrown into a game of cat and mouse where the amnesiac suicide bomber (Karan Kapadia) is trying to make sense of his situation. Oh, and did we tell you - the bomb is not strapped to his chest, but connected to his heartbeat.

We get it - Blank tries its best to say that the only "dharm" (religion) that terrorism has is money. Faith is just used as a recruitment tool. But Diwan still carefully extricates the Quran after a confrontation. Khambata struggles to move past the radicalised Muslim terrorist stereotype, complete with skull caps and kohl-lined eyes, and the bearded Muslim preacher as chief recruiter.

There are multiple issues with the script, the most significant one being its pacing. A high action thriller requires deft execution to keep the audiences on their toes, and Blank has multiple moments where the intensity lulls. The other problem that plagues the movie is the credibility of the narrative. A man's heartbeat being the trigger for a bomb feels pretty far-fetched, and to add to that, said bomb is connected wirelessly to multiple other bombs.

Sunny Deol is once again the tough good guy who uses his "dhai kilo ka haath" to dish out justice. Paaji is comfortable as usual, throwing punches and serving looks, despite playing a generally non-rambunctious character. Karan Kapadia is a lot better at looking "blank" (which is the look the script demands, mostly, so we cannot fault him for that) than the couple of scenes that require him to emote.

Karanvir Sharma and Ishita Dutta play two cops who, despite being essential to the script, aren't given much to do. Jameel Khan spouts dialogue that seems clichéd, but manages to sound menacing with his delivery. Jameel Khan and Ishita Dutta both star in the other release on the same day, Setters, too, and have the same luck in both films.

Blank is unbearably loud, to the point where the background music is honestly the real villain in the movie. There are a few songs - like the opening track which tries to be a war cry - but none very memorable. You'd have already had enough, and left by the time the credits song featuring Akshay Kumar plays.

We thought that makers of this movie tried to take a page straight out of A Wednesday's book. Unfortunately for them, Blank is a neither a taut thriller nor does it have the requisite powerhouse performances. For all that it's worth, it mostly fires blanks.
Share. Save. Connect.
Tweet
BLANK SNAPSHOT ADVERTISEMENT
This page was tagged for
blank movie in hindi onlain
Blank hindi movie
Blank reviews
release date
Sunny Deol, Karan Kapadia
Follow @fullhyderabad
Follow fullhyd.com on
About Hyderabad
The Hyderabad Community
Improve fullhyd.com
More
Our Other Local Guides
Our other sites
© Copyright 1999-2009 LRR Technologies (Hyderabad), Pvt Ltd. All rights reserved. fullhyd, fullhyderabad, Welcome To The Neighbourhood are trademarks of LRR Technologies (Hyderabad) Pvt Ltd. The textual, graphic, audio and audiovisual material in this site is protected by copyright law. You may not copy, distribute, or use this material except as necessary for your personal, non-commercial use. Any trademarks are the properties of their respective owners. More on Hyderabad, India. Jobs in Hyderabad.