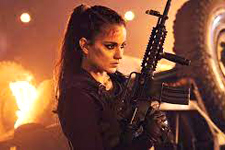 There is such a dearth of female-protagonist-led slick action thrillers in Bollywood, that it would require some head-scratching to think of a similar movie. Similar movies in Indian cinema, that is, because Dhaakad is so derivative of Western thrillers that it becomes a game of "spot the inspiration". Hell, the main promotional poster of Kangana in Dhaakad immediately brings to mind Alicia Vikander in Tomb Raider, down to the tank top and the hairdo.

So, let's play this game, shall we?

Director Razneesh "Razy" Ghai REALLY wanted to make a film about a badass, independent woman à la Uma Thurman in the Kill Bill movies - she has no need for melodrama, does not suffer from the male saviour complex, and is not afraid to get dirty. And we will celebrate his success at that - a no-nonsense female action heroine is a breath of fresh air in an industry where most female roles in action thrillers are relegated to being either eye candy or a femme fatale for the male protagonist.

We are introduced to agent Agni (Kangana Ranaut) as she is preparing for a mission in Budapest, Hungary. Agni is all action - she shoots, slices and slams her way through a horde of bad guys - dressed in an impractical, skimpy outfit that reminds you of Emily Browning in Sucker Punch.

We are also introduced to the baddies, Rudraveer (Arjun Rampal) and Rohini (Divya Dutta), in a series of flashbacks - the former a bloodthirsty human trafficker, and the latter his partner who looks at the monetary aspects of the sordid "business".

Charged with infiltrating Rudraveer's hideout to flush him out, Agni realises that there's more than what meets the eye when it comes to her mission. Reminiscent of Sasha Luss in Anna, she must outsmart, outgun and outrun her foes while discovering the truth.

A powerful central female character means nothing if there's no script to back her exploits up. For all its good intentions, Dhaakad has nothing to offer in terms of a story despite utilising every trope from the book. Much like Charlize Theron in Atomic Blonde, Kangana's Agni in Dhaakad is a thinly-written female lead who is given the backdrop of some kind of social evil to hopefully draw the audience in with an emotional hook (spoiler: it doesn't), while the film tries to (over)compensate with a flurry of action sequences.

The worst part about all of this is that this is a movie influenced by so many Hollywood action films - some of them good ones, mind you - and yet fails to come up with even an engaging product. We didn't go in expecting high cinema, but at the very least serve up something akin to the Black Widow (yep, Scarlett Johansson's Natasha Romanoff is also something Dhaakad seems to have taken inspiration from, especially in close combat scenes), which is a fun film on its own, MCU links aside.

Kangana Ranaut is the one person who seemed to have a blast in Dhaakad, as she serves looks and cracks heads without breaking a sweat. Much like Jennifer Lawrence in Red Sparrow - yes the red wig and bangs in the trailer made us think of the character of Dominika Egorova at once - she seems to make the most out of a sub-standard story. Arjun Rampal looks like a sanitised version of your goon-turned-gang-leader in the flashbacks, but he looks menacing enough in the second half. The otherwise talented Divya Dutta chews up the scenery, and her damsel-turned-dame act is odious. Saswata Chatterjee as Agni's handler, and Sharib Hashmi as her sidekick round up the supporting act, and are actually more watchable than the villains.

Dhruv Ghanekar's and Shankar-Ehsaan-Loy's soundtrack is loud and thumping, and pumps up the adrenaline. The individual songs, however, leave much to be desired. The end credits song by Badshah, "She's On Fire", calls whatever-this-is Tarantino's tenth film, which serves as a nice spot of unintentional comedy. Also, Kill Bill: Volume 1 and Kill Bill: Volume 2 are separate movies, and Once Upon a Time in Hollywood is Tarantino's tenth film - sorry, we had to set the facts right.

If you aren't one of those, though, we'd recommend catching anything from the game of "spot the inspiration" - which we just played - instead. Or, watch Dhaakad and play your own game because we are sure we have missed plenty of other movies that seem to have inspired this one, and let us know! 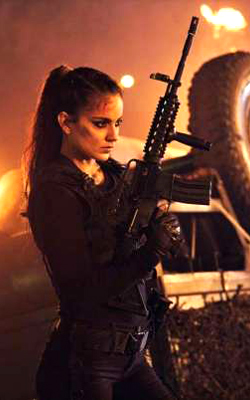 ADVERTISEMENT
This page was tagged for
Dhaakad hindi movie
Dhaakad reviews
release date
Kangana Ranaut, Arjun Rampal
theatres list
Follow @fullhyderabad
Follow fullhyd.com on
About Hyderabad
The Hyderabad Community
Improve fullhyd.com
More
Our Other Local Guides
Our other sites
© Copyright 1999-2009 LRR Technologies (Hyderabad), Pvt Ltd. All rights reserved. fullhyd, fullhyderabad, Welcome To The Neighbourhood are trademarks of LRR Technologies (Hyderabad) Pvt Ltd. The textual, graphic, audio and audiovisual material in this site is protected by copyright law. You may not copy, distribute, or use this material except as necessary for your personal, non-commercial use. Any trademarks are the properties of their respective owners. More on Hyderabad, India. Jobs in Hyderabad.