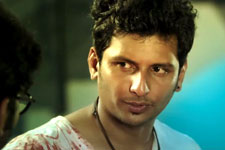 Neema Pramod / fullhyd.com
EDITOR RATING
1.5
Performances
Script
Music/Soundtrack
Visuals
3.0
1.0
6.5
3.0
Suggestions
Can watch again
No
Good for kids
No
Good for dates
No
Wait to rent it
Yes
Films are very powerful. They can evoke the strongest of emotions and reactions from within you. Some can make you laugh till your stomach hurts. Some can make you cry until your tear-ducts dry up. And some can make your blood boil. What makes Key (dubbed from Tamil) so special is that it can make all of these happen to you - and more.

But also, all these emotions merge into one single feeling - pity. Pity that the cast and crew of this film actually believed that they could sell such misogyny, sexism and crassness in the name of humour. Pity that they believed that some frenzied editing, high-tech devices and intelligent-sounding terms could make for a clever science-fiction thriller. Pity that they forgot that this was 2019, and that their audiences are not perverted fools.

Siddharth (Jiiva) is a college student who is also an expert hacker. But what does he use his tech skills for? To "pick up" girls by hacking into their phones with his Bhaasha virus, learning everything about them (including which bra they are wearing), and using the information to woo them. And the creepy stalker does manage to woo a couple of girls.

Let us take a look at these girls. One of them is Vandana (Anaika Soti), a reporter who does more seducing than reporting to get the job done. Then there is Diya (Nikki Galrani), who reminds you of a wailing banshee with a unicell brain. No surprises as to who gets the guy (hint: a woman's IQ is inversely proportional to the chance of a happily-ever-after), though in this case I feel that the two deserved each other. At least the rest of the world can live in peace.

Oh, not to forget, Siddharth also has a "cool" dad (Rajendra Prasad) who is there to prove that his son's behaviour is genetic, and a sensible mom (Suhasini Maniratnam) who is made to sit through a lecture on how fathers are better than the silly, emotional mothers who do nothing for their children except giving birth to them - just because she dares to question her husband on why he encourages his son's "irresponsibility".

The scenes involving the above characters are inter-cut with those of the antagonist (Govind Padmassorya), who is the mastermind behind a game akin to the Blue Whale Challenge - where he manipulates emotionally disturbed people to do his bidding. What happens when Siddharth crosses his path is what Key is all about - when it is not busy being an adult comedy, that is.

Technology and how it can be misused was a theme that was explored just last year in Abhimanyudu (also dubbed from Tamil). Abhimanyudu did have its share of problems, but it at least made some sense, and kept you hooked for most part. Key, on the other hand, just tests your patience and intelligence. There are voice-overs explaining every single thing that is happening on screen in a hurried manner, not giving you any time to process the information thrown at you (or perhaps that is their way of masking the glaringly obvious loopholes). Some scenes, like the one involving a pacemaker, are absolutely outlandish.

The direction is terribly amateurish. The film just keeps jumping from one point to another with no sense of continuity. The emotional flashback of an important character is inserted at some random point in the beginning - with no scene leading up to it or following up on it - just so that it can be brought up again at the end when the truth about the antagonist is unravelled. Another important character dies, and no one seems to notice. Like the voice-overs, even the editing is hurried in an effort to distract the audience from the sheer mess on display.

It is disheartening to watch a promising actor like Jiiva stuck in a film as atrocious as this. Govind Padmasoorya looks great and shows potential, but has nothing to do other than look menacing. The heroines are wasted - though Anaika Soti isn't as grating as Nikki Galrani. Rajendra Prasad and R J Balaji (the "hero"'s friend) are unbearable, though that has more to do with their characters than their performances. Suhasini manages to lend some dignity to her unremarkable role. The music, by Vishal Chandrasekar, is decent.

As I said in the beginning, Key made me laugh - at its stupidity - cry - for the few poor souls in the theatre - and angry - for all the reasons stated above. The movie finally hit the screens this week after a year-long delay. Now that I have seen it, all I have to ask is, why couldn't it have been delayed until Doomsday?
Share. Save. Connect.
Tweet
KEY (TELUGU) SNAPSHOT

ADVERTISEMENT
This page was tagged for
key telugu movie review
KEY (Telugu) telugu movie
KEY (Telugu) reviews
release date
Jiiva, Govind Padmasoorya
Follow @fullhyderabad
Follow fullhyd.com on
About Hyderabad
The Hyderabad Community
Improve fullhyd.com
More
Our Other Local Guides
Our other sites
© Copyright 1999-2009 LRR Technologies (Hyderabad), Pvt Ltd. All rights reserved. fullhyd, fullhyderabad, Welcome To The Neighbourhood are trademarks of LRR Technologies (Hyderabad) Pvt Ltd. The textual, graphic, audio and audiovisual material in this site is protected by copyright law. You may not copy, distribute, or use this material except as necessary for your personal, non-commercial use. Any trademarks are the properties of their respective owners. More on Hyderabad, India. Jobs in Hyderabad.