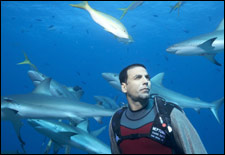 Deepa Garimella / fullhyd.com
EDITOR RATING
4.5
Performances
Script
Music/Soundtrack
Visuals
6.0
3.0
7.5
10.0
Suggestions
Can watch again
No
Good for kids
Yes
Good for dates
Yes
Wait to rent it
Yes
To be fair to the film, if you really had money left for a decent writer, after all that spending on rich underwater filming and star power, you'd have to be, well, Lakshmi Mittal.

Akshay Kumar returns to a genre that he was originally comfortable in, before he became one of Bollywood's "complete entertainers". It is his reported penchant for death-defying stunts - a passion that's seen quite a few outlets, both in cinema and on TV - that drives you to Blue. That is, if the much-publicized cinematography hasn't drawn your attention.

However, 2 exotic ingredients do not a meal make. At least not when they ought to have been just the seasoning.

The tale is set in the Bahama Islands, where there are enough greens and blues and quaint markets to make you wistful about going there "some day", though not enough to inspire you to google the country's capital. The fishing business is what gets Aarav (Akshay Kumar) and Sagar (Sanjay Dutt) together. Aarav is the boss of a much older Sagar, and these 2 spend a quarter of the movie showing us how different they are from each other, and yet how chummy.

The philandering Aarav, slightly low on scruples, leads a snazzy lifestyle cruising, boozing and snoozing on the Bahamas. The much more anchored Sagar isn't that rich, but has a steady girlfriend Mona (Lara Dutta). His life, as we are informed by his regular usage of her name in every sentence of his, is centred on Mona, whose life in turn centers on him.

On the other hand, all Aarav wants is to get richer. He tries to instigate the seafarer in Sagar, by springing up the phrase "Lady In Blue" at carefully planned moments. Lady In Blue, apparently, is the vessel in which the British were to return some valuables they stole from India, and that sunk before it could reach home. Aarav intends to get Sagar to find the treasure so they both can get rich, but Sagar keeps bristling at the very mention of the name.

Now why is Sagar seen as the ultimate authority on marine geography of the Bahamas and on messy colonial secrets? Why does he not like talking about them anyway? Does the Lady In Blue seriously exist? Does Blue seriously have a plot? And how did they get A R Rahman to sign this?

The party is further pooped by Sagar's bratty brother Sameer (Zayed Khan), who's himself running away from trouble in the form of a villain Gulshan (standard-issue Rahul Dev), and who joins Sagar in the Bahamas.

Sameer is welcomed with open arms, and things get comfortable for him, until he somehow starts believing that his brother had actually stolen the treasure from aboard the Blue Lady. Sameer thinks his brother's cheating him, but Sagar convinces him that the film has ripped them all off and that he's not alone. Desperation for the money sets in when Gulshan follows him to the Bahamas.

In any case, the second half sees Sagar conceding to help the trio look for the treasure. And some secrets being spilled. And a certain part of the Atlantic Ocean being tinged a wee bit red.

Blue, a film that quite easily lends itself to some unfortunate puns involving the words "blue", "depth", "shipwreck" and "sink", comes apart primarily because there's simply no plot. Forget the treasure hunt, the thrills, and the mystery. And forget the meagre babe factor.

The underwater sequences are gorgeous - with some breath-taking shots of aquatic life. And really, to actually shoot entire scenes in terrain that's largely hostile and off-limits to humans, is path-breaking work indeed.

But these scenes are too few for the film to base its entire hopes on. The opening credits, a brief Akshay-shark tussle, and a song - that's all the deep-sea diving you get to do pre-interval. And post-interval, the characters take forever to decide to look for the treasure, and when they do, it's again devoid of any captivating effort from the rest of the crew other than the cinematographer's team.

What makes it all the more bizarre is the unfair limelight that Sameer's track hogs, what with the 15-minute bike chase with exploding cars and bikes and the lifeless romance with Nikki (Katrina Kaif). Blue also has no snappy dialogues to induce the slightest snort, and when the climax sets in, you realize that the writing has never once risen above being as basic as a school essay.

Performances are a non-accessory here, and no one's really helping. Akshay Kumar and Sanjay Dutt are their usual selves, and there really should have been more scenes involving these true-blue action heroes, rather than on the struggling Zayed Khan.

The soundtrack does justice to the on-screen thrills, and the opening credits are accompanied by a rather electrifying song. Kylie Minogue's Chiggy Wiggy is rather dreary, and the other songs are about all right.

If you really feel like catching some high-intensity marine drama, the Goethe Zentrum has regular screenings of the Planet Earth series. That is, if you think switching the remote to Discovery Channel or Nat Geo is too much work.

ADVERTISEMENT
This page was tagged for
Blue 2009 film
Blue (2009) hindi movie
Blue (2009) reviews
release date
Akshay Kumar, Sanjay Dutt
Follow @fullhyderabad
Follow fullhyd.com on
About Hyderabad
The Hyderabad Community
Improve fullhyd.com
More
Our Other Local Guides
Our other sites
© Copyright 1999-2009 LRR Technologies (Hyderabad), Pvt Ltd. All rights reserved. fullhyd, fullhyderabad, Welcome To The Neighbourhood are trademarks of LRR Technologies (Hyderabad) Pvt Ltd. The textual, graphic, audio and audiovisual material in this site is protected by copyright law. You may not copy, distribute, or use this material except as necessary for your personal, non-commercial use. Any trademarks are the properties of their respective owners. More on Hyderabad, India. Jobs in Hyderabad.