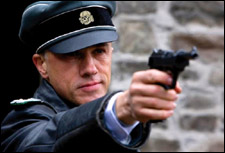 Sudhir Pai / fullhyd.com
EDITOR RATING
8.0
Performances
Script
Music/Soundtrack
Visuals
8.0
9.0
8.0
9.0
Suggestions
Can watch again
Yes
Good for kids
No
Good for dates
Yes
Wait for OTT
No
Quentin Tarantino is known to make films that are full of legendary contradictions, real-life references and imaginary events, inspired/borrowed elements and dazzling original plots, and mind-numbing absurdity and deep-layered meaning - often rendering them as brilliant as they are ridiculous. And we movie buffs love him for just that. Suffice it to say, Inglourious Basterds is Tarantino's most glorious attempt since Pulp Fiction.

The title, borrowed from another World War 2 movie of the '70s, refers to a fictitious outfit of Jewish American soldiers who run amok at the sight of a Nazi. The Basterds, led by Lt. Aldo "The Apache" Raine (Brad Pitt), are assigned to run around German-occupied territory and kill Nazis in particularly brutal ways, in order to strike fear in their hearts and demoralize them. It could have been a simple plot, but then we can count on Tarantino to add several layers, and he does, with enough twists to leave a film critic with a migraine.

Inglourious Basterds is divided into 5 chapters. Chapter One begins in Nazi-occupied France, to the tunes of Beethoven's Fur Elise, in a style reminiscent of Ennio Morricone. We are introduced to Officer Landa (Christoff Waltz), who, by all appearances, is a paragon of gentlemanliness. But Landa is a sadistic Nazi whose villainy is almost Joker-esque. His exacting ways of hunting and killing of Jews betray his dignified demeanour and earn him the sobriquet, "The Jew Hunter".

Landa presents himself as a charming, loquacious gentleman when he enquires of the whereabouts of a missing Jewish family. He maintains a jovial faÃ§ade while interrogating an intimidated local farmer, who is suspected of providing shelter to Jewish families. But it proves to be a methodical build-up to the organized mayhem that follows - suddenly, a conversation in good spirit turns into an understated threat with lethal tensions beneath, resulting in an unscrupulous murder of the absconding Jewish family hiding in the cellar of the farmer's house.

And for the rest of the movie, Christoff waltzes with the best dialogues and a dazzling diabolical performance. His character of Officer Landa is a heady mix of seductive charm and Satanic malice.

Duly reciprocating Landa's affection for Jews are the Basterds, introduced in the 2nd chapter. Driven by hatred, the Basterds are, for lack of a better word, terrorists. They create havoc by butchering every Nazi in sight, and believe in their 'righteous' carnage of German soldiers. From carving the swastika on their victims' foreheads, to battering their skulls with baseball bats, the motley crew gives sleepless nights to Hitler himself.

The Basterds embark on a mission to assassinate the Nazi high command by blowing up a Paris movie theater during the premiere of Joseph Goebbels' (the Nazi Minister Of Propaganda) latest propaganda epic, 'Pride of a Nation'. Also commissioned to join the Basterds is a suave British Intelligence officer Lt. Archie Hicox (Michael Fassbender), whose claim to fame is being a movie critic of German cinema.

This mission also merges with the plot of vengeance planned by Shoshana (MÃ©lanie Laurent), who narrowly escaped while losing her family to Landa's playful violence, and is now the owner of the cinema hall which will host the who's who of the Third Reich on the premiere night.

With Inglourious Basterds, Tarantino tries his hand at rewriting history, quite literally. If it were left to the director, the Axis powers would have surrendered following Hitler's death in a bombing incident. While making several other references to real-life characters that include Winston Churchill, Adolf Hitler, Joseph Goebbels and Emil Jannings (legendary German actor), the factual inaccuracies would probably drive historians to go on a Dandi March.

But then, the quintessential Quentin is unveiled shortly after the impressive opening chapter, where the humour assumes darker shades, and its execution is almost impish in nature. The blood and gore, other Tarantino tools, are concealed under the skin of ornate dialogue - a lot of which is in German, French and some Italian, much to the amusement of a Hyderabadi audience at Inox.

Each of the 5 chapters stands out in its visual style of direction. And each boasts of a gallery of artistic character sketches. The quality of acting would also garner an Oscar nomination or two, most notably Waltz, with his portrayal of Officer Landa. But what will earn Inglourious Basterds a sacrosanct place in the Tarantino School Of Cinema is the writing.

The plot, though complex, is fast, flawless and engaging. Although there are a number of big action scenes, the best moments in Inglourious Basterds are the run-ups to those scenes, beginning with the very first sequence. This foreplay has more impact than the climaxes of actual violence, thus making it totally riveting.

Tarantino also manages to weave seamless transitions among the different languages and cultures - 4 of them in all - in the script, and the subtitles have also been craftily written.

Which brings to the small matter of the outrageous spelling of the title - something the director himself wouldn't explain, merely calling it the "Tarantino way of spelling it." Our guess is that it is meant to confuse those who use no more than an MS Word Spell check to pass their verdict on the content of the film. Or it is as much a marketing ploy as Hitchcock's appearances were in his movies. But then, our guess is only as good as yours.

Inglourious Basterds isn't about the war. The World War 2 is no more than a backdrop, and the events at the world stage during the period seem to have no bearing on the story.

And neither is it about the victims of war and their problems, nor a satire about who was right or wrong, or as a literary great said, who was right and who was left. It is a movie, in the truest sense. And it's worth your money, and time. Period.
Share. Save. Connect.
Tweet
INGLOURIOUS BASTERDS SNAPSHOT

I thought i wouldn't understand the film (i'm not a Hollywood regular). I thought there would be sickening gore. I thought it would be disturbing.

And I was proved wrong on all counts. I think Inglourious should be watched by more people, to see the sheer power cinema can have over you.

The movie works because it celebrates its cinematic being itself - it never pretends to be something other than larger-than-life. I'm certainly awed by this presentation, as it cleverly combines understatedness and entertainment.

You must watch it for the Waltz guy, who's simply brilliant. He's greatly helped by the fact that he's so goddamn handsome.

The movie is not that hard to follow either, and doesn't leave you with nightmares of violence - there is intense gore, but in few pockets. Somehow, it reminded me a lot of Hindi and Telugu cinema.

Inglourious is largely a drama-comedy-satire, and roughly a manifestation of what we wish the world would be like. Of course, the manifestation should be allowed an error margin - Tarantino's world isn't beyond its flaws.

So, watch it guys. And don't crib about it being a 'weird' film!


RATING
9
aamchihyd on 7th Oct 2009, 12:17am | Permalink
Portuguese Man-of-War: Cool, try watching it on the big screen - it blew me away the first time, and was a nice 'slow burn' the 2nd time (though by this time I knew how it ended). Am looking forward to seeing more of Melanie Laurent (she was in a nice French ensemble drama I saw the other day, called 'Paris'), and I hope Tarantino makes the announced prequel to this one (or...maybe not). Have fun!


Pros: Everything, esp. the little details, and the long conversations
Cons: Some continuity/editing, I won't nitpick, though


Pros: Christoph Waltz, Melanie Laurent, Brad Pitt, Spaghetti westernization of WWII genre movies
Cons: None (some will crib about the sub-titles and length, though - not me)

ADVERTISEMENT
This page was tagged for
Inglourious Basterds english movie
Inglourious Basterds reviews
release date
Brad Pitt, Christoph Waltz
theatres list
Follow @fullhyderabad
Follow fullhyd.com on
About Hyderabad
The Hyderabad Community
Improve fullhyd.com
More
Our Other Local Guides
Our other sites
© Copyright 1999-2009 LRR Technologies (Hyderabad), Pvt Ltd. All rights reserved. fullhyd, fullhyderabad, Welcome To The Neighbourhood are trademarks of LRR Technologies (Hyderabad) Pvt Ltd. The textual, graphic, audio and audiovisual material in this site is protected by copyright law. You may not copy, distribute, or use this material except as necessary for your personal, non-commercial use. Any trademarks are the properties of their respective owners. More on Hyderabad, India. Jobs in Hyderabad.