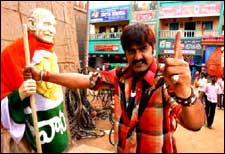 Deepa Garimella / fullhyd.com
EDITOR RATING
5.0
Performances
Script
Music/Soundtrack
Visuals
8.0
4.0
6.5
7.0
Suggestions
Can watch again
No
Good for kids
No
Good for dates
No
Wait for OTT
Yes
Making a movie about Gandhi's ideals, using gore for 95% of it - both physical violence and violence of the thought - is as unimaginative as teaching your bully of a child to not hit his classmates, by giving him a sound spanking. It is probably effective, but if you stop and think a little, you'll reason out that it doesn't make sense.

Mahatma is simply the story of a rowdy sheeter who reforms during the last half hour of a movie of 2.5 hours. That is, after what can technically be called an item song that revolves around the father of the nation - a song that, we must admit, does blow you away, and that turns out to be quite a spiritually exhilarating experience.

The story's set in a basti in the center of which a statue of Gandhi stands grossly neglected - the statue does nothing more than serve as the nightly boozing chowk for Das (Srikanth) and his gang. Das is the local goonda out here, and one who's loyal to the local slimy politician Dada (Jayaprakash Reddy). Dada has his horns locked with his party rival Kalarani (Jyothy), and they're both fighting for their respective personal gains in the building of an SEZ.

Somewhere along the story, the illiterate, uncouth Das starts having starry-eyed dreams of becoming a movie star, a vision he looks up to Dada to fulfil. Dada has evil plans of his own, and tunes up Das' dreamscope by promising he'll make him a corporator. There's a murder that accelerates Dada's implementation of his viciousness, which is when Das realizes he's being used.

The Das decides to contest the elections, and is egged into ahimsa by his lawyer girlfriend (Bhavana). Whatever is left of the movie is about how the turning of the other cheek changes the course of his life.

What works for Mahatma is that it's ultimately the story of triumph of good over evil (wonder where we've seen that before), has impressive dialogues (that are credited to the Paruchuri brothers), and has a few finely crafted scenes of the hero's contrition. Oozing with all the digs you'd want to take - on politicians and on movie heroes - the lines are sure to get loud cheers from benches all the way to the top.

Mahatma really could have been any movie with an anti-hero who has a change of heart. One of the problems with the film is that it exaggerates the villainy, making it perverse towards the end. For example, there's a scene in which a whole family is out for the blood of their patriarch, and when he hides from them in his bedroom, they goad him out by threatening to kill his grandchild, a 1-year baby, instead. It's indeed a questionable state of affairs when you have to resort to looking good by making the bad - in this case, the villains - look ugly. In another scene, Das immolates himself - something that surely the Mahatma never endorsed.

And Das' goondaism - that lasts for more than half the movie - seems contrived. Srikanth can seem coarse and boorish only upto a point, and after that, it's a desperate attempt to connect with the masses. Also, SEZs and Tollywood - 2 firebrand topics that Mahatma begins to talk about - end up abandoned after a few teases. Indeed, there are quite a few issues that are left unresolved, and this makes it look like Mahatma Gandhi was an afterthought that Krishnavamsi came up with because he couldn't close those issues.

Plus, it's not like Gandhism saved the day. The real villain ends up being stabbed brutally and in a kind of a human error - it takes place simply because Das happens to move an inch away... which happens because he's busy throwing up blood (oh yes, and you get to see a close-up of him doing it, too)...

Well, there's nothing you can complain of about the performances. Srikanth, like we said, did what he could, and his conviction carries his role through. Jayaprakash Reddy is in a role that he can no longer improvise on. Uttej is enthusiastic, and Paruchuri adds to the thrills with his lines.

The music is quite loud and unimpressive, save for the song on Gandhi and another well-choreographed romantic folk number towards the end. Some of the scenes have been creatively shot, like the first fight sequence. There's also a character who plays a street theatre artiste who dons roles of different freedom fighters - an innovative story-telling ploy that could really have been used better.

Don't take your kids or any women to Mahatma. And if you love a quiet introspective film, there's nothing in it for you, either. To pay a real tribute to Gandhi, here's a lesson that we'd rather endorse. Srikanth should have stuck to the syllabus.
Share. Save. Connect.
Tweet
MAHATMA SNAPSHOT

See Mahatma full details
MAHATMA USER REVIEWS
1 - 3 OF 3 COMMENTS
POSITIVE  |  NEGATIVE |  NEWEST  |  OLDEST  |  MOST HELPFUL  |  LEAST HELPFUL
USER RATING
8.0
2 USERS
Performances
Script
Music/Soundtrack
Visuals
9.0
6.5
9.0
6.0
Can watch again - Unsure
Good for kids - Yes
Good for dates - Unsure
Wait for OTT - No
cymkhat on 12th Oct 2009, 10:36am | Permalink
Don't feel like it is a Krishna Vamshi movie. Way way way below "Chandamama" standards. Looked like some balaya movie. Too many close up shots - maan... could not watch it. Script very wayward and felt like the director could not handle it. Mass song was directed horribly, all songs are badly directed. songs are very bad - all are Tamil copy/dub songs. Srikanth ok ok. Heroine good but could have looked more beautiful. Gandhi angle is good but could have been better. Unrealistic gandhi sentiment. Politicians shown too cruel and senseless. Had lot of expectations and was utterly disappointed. Basically not worth watching in a theater.

Movieluv on 10th Oct 2009, 4:10pm | Permalink
Srikanth's action is superb. Indiramma Song is touching, however the lyrics has changed to "kontha mandi sontha peru kadu raa gandhi". I do not understand what's wrong in lyrics. If it says kontha mandi......., who are others with Gandhi name. Nonsense.
RATING
7
Krishna on 10th Oct 2009, 3:51am | Permalink
Srikanth's hard work is visible through out the movie. Must see for Srikanth, Nice different Music, Good Story and good production values. Better than most of the movies in thatres. Go and enjoy the movie with your whole family.

ADVERTISEMENT
This page was tagged for
Mahatma telugu movie
Mahatma reviews
release date
Srikanth, Bhavana
theatres list
Follow @fullhyderabad
Follow fullhyd.com on
About Hyderabad
The Hyderabad Community
Improve fullhyd.com
More
Our Other Local Guides
Our other sites
© Copyright 1999-2009 LRR Technologies (Hyderabad), Pvt Ltd. All rights reserved. fullhyd, fullhyderabad, Welcome To The Neighbourhood are trademarks of LRR Technologies (Hyderabad) Pvt Ltd. The textual, graphic, audio and audiovisual material in this site is protected by copyright law. You may not copy, distribute, or use this material except as necessary for your personal, non-commercial use. Any trademarks are the properties of their respective owners. More on Hyderabad, India. Jobs in Hyderabad.