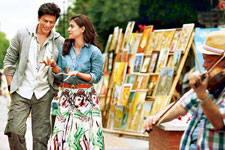 Zehra Abbas / fullhyd.com
EDITOR RATING
6.5
Performances
Script
Music/Soundtrack
Visuals
7.0
5.0
7.0
7.0
Suggestions
Can watch again
No
Good for kids
Yes
Good for dates
Yes
Wait to rent it
No
Rohit Shetty got greedy. There's no other way to put it. He has attempted a Mumbaiyya cocktail of action, drama, comedy and romance, and in the process, seemingly forgotten that he had one of the Hindi film industry's most iconic pairings at his disposal.

Dilwale begins by introducing you to brothers Raj (Shah Rukh Khan) and Veer (Varun Dhawan), who live in an otherworldly-looking Goa. They own a garage where they modify cars, and take great pains to clarify that they aren't mechanics. Raj, the doting, strait-laced elder brother looks on indulgently at the bratty antics of Veer, all the while hiding a dark past from his sibling. Matters take a turn when Veer falls in love with Ishita (Kriti Sanon), and her elder sister, Meera (Kajol), refuses to let the lovebirds marry due to events that had transpired 15 years ago in Bulgaria between her and Raj. It's then upto Veer and Ishita to resolve the misunderstandings of the past.

As you can see, the basic premise of the film is neither original nor complex. Lazy writing compounds the problem, and kowtowing to irrational "fun", as Shetty tends to do, affects the pace of the film - it's like driving a Hummer without shock absorbers. Plot points are under-developed, implausible or just plain unnecessary. However, when the under-developed plot point is the romantic track between Raj and Meera, you know you've been cheated. How can you cast SRK and Kajol in the lead, call the film "Dilwale" and then fail to deliver the goods?

Ironically, it's also SRK and Kajol that make the film watchable. Khan has a powerful screen presence, and when he made his entrance at the beginning, your reviewer's ears endured a terrific assault from a gaggle of college girls to her right, and an aunty and uncle to her left. Ditto for Kajol. Khan puts in an effortless performance, ably juggling all that Shetty throws at him - his comic timing is good, he looks suitably lean and mean in the action scenes, and when Kajol falls into his arms it's Mills and Boon, Harlequin and Fifty Shades all rolled into one hot, desi fantasy.

Kajol looks gorgeous, albeit the weird whitening treatment or photoshopping. Her performance is mostly vintage Kajol, but oddly forced in places. We'll attribute it to her 5-year hiatus, and move on to discuss the real problem. There's a scene when Raj leans in to kiss Meera, and is interrupted by Oscar (a fabulous Sanjay Mishra). Shetty plays a spoilsport Oscar for us throughout the film. Sure, he's dutifully supplied all the paraphernalia that goes with this "jodi" - sweeping, lush visuals, haunting music and lots of shots of them staring deeply into each other's eyes. But hold on. The visuals have a decidedly Bollywood palette and the plastic colours keep reminding you that this is just make-believe, "Gerua" and "Janam Janam" are the only two songs that stay with you, and each time the leads stare deeply into each other's eyes, just when the moment is on the brink of deepening, just when the romance is about to soar, Shetty moves the camera to another scene.

Before you can even articulate your disappointment at being denied the emotional payback that made DDLJ a classic, Shetty has dropped you plumb into the middle of a comic scene, replete with corny dialogues and loud humour. Varun Dhawan shoulders much of the responsibility for this element of the "product", and gives it his energetic best. His dialogue-delivery suffers in places due to his over-enthusiasm and the filmmaker's rather broad definition of humour, so just keeping whispering "Badlapur" under your breath, and you'll be able to forgive him. Kriti Sanon looks fresh and pretty, and does the best that she can with her miniscule role. However, Sanjay Mishra is fabulous, and his deadpan delivery of some crazy lines gets genuine laughs. And it's a pleasure to see Johnny Lever on screen again, as well.

But don't laugh too hard at their antics because the sudden explosion of a car might shock you. Yes, Shetty has now jumped into an action sequence. Nothing new here - lots of cars, lots of explosions. We are convinced that he and his wife wouldn't have exchanged garlands when they got married - they must have put Dunlop tyres around each other's necks.

The lack of originality is disappointing, and when scenes are lifted shamelessly from How I Met Your Mother and Mission Impossible, then it's unforgivable. Many viewers might not connect the 5-minute date with the former, but everyone will recognize the famous car-spinning scene from the latter. Today, when we can argue that SRK is as big a star as Tom Cruise, it's a pity to see such blatant cinematic laziness - the cycle rickshaw chase in Main Hoon Na was better.

That brings us to the question of the day. Why did a star like SRK agree to sign up for such mediocre fare? Certainly, there is enough "masala" to ensure that this film will be a commercial success, and that it will keep his general fandom pleased. However, is it enough for his rabid fans, for the ones who kept DDLJ running for 20 years? They'll just have to wait for Raaes in 2016.

The title's referencing to DDLJ has created certain expectations, so firstly recalibrate those. Secondly, remember that this is a brownie, not a gateaux. As a matter of fact, when you see Khan and Kajol lip-syncing to "Gerua" on top of an old plane in the middle of nowhere, you'll wonder if it's a hash brownie - watch the film only for the undeniable magic of the leads.
Share. Save. Connect.
Tweet
DILWALE (HINDI) SNAPSHOT 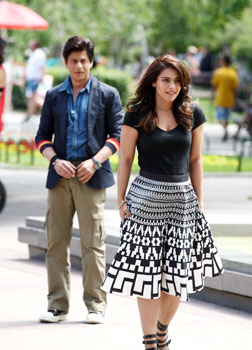 I'll be honest. I am a huge SRK fan, and I love any movie where SRK plays himself. That doesn't mean I like all his movies. Movies like Chennai Express and Happy New Year were just about average. That being said, I loved this movie. The movie was not billed as anything else except for a paisa-vasool entertainer and it delivers. You have these grand locations, glitzy costumes, and great cars. More importantly, the screenplay is quite racy and in spite of way too many convenient plot twists, doesn't make you yawn.

The performances were great. Not artistic, just entertaining. Rohit Shetty cashed in on the SRK-Kajol romance to good effect. Shahrukh was Shahrukh, Kajol was a little too bright (literally), Varun Dhawan was hilarious in parts, and Kriti Sanon was gorgeous. My only complaint with the movie was a couple of sequences involving Johnny Lever in the second half.

The action set pieces are Shetty-esque and the music by Pritam was really catchy (must've been "inspired" by some really good albums). Overall, I would definitely recommend this film if you want to put everything behind you and laugh out loud for a couple of hours. If you expect this movie to make you think about how you can solve the world's problems, you are clearly not familiar with Rohit Shetty's work.

ADVERTISEMENT
This page was tagged for
dilwale full movie in hindi
dilwale varun dhawan movie review in hindi
Dilwale (Hindi) hindi movie
Dilwale (Hindi) reviews
release date
Follow @fullhyderabad
Follow fullhyd.com on
About Hyderabad
The Hyderabad Community
Improve fullhyd.com
More
Our Other Local Guides
Our other sites
© Copyright 1999-2009 LRR Technologies (Hyderabad), Pvt Ltd. All rights reserved. fullhyd, fullhyderabad, Welcome To The Neighbourhood are trademarks of LRR Technologies (Hyderabad) Pvt Ltd. The textual, graphic, audio and audiovisual material in this site is protected by copyright law. You may not copy, distribute, or use this material except as necessary for your personal, non-commercial use. Any trademarks are the properties of their respective owners. More on Hyderabad, India. Jobs in Hyderabad.