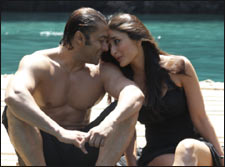 Deepa Garimella / fullhyd.com
EDITOR RATING
4.5
Performances
Script
Music/Soundtrack
Visuals
7.5
3.5
6.0
6.0
Suggestions
Can watch again
No
Good for kids
Yes
Good for dates
Yes
Wait for OTT
Yes
Main Aurr Mrs. Khanna uses a total of 4 guest appearances to prop itself up, one of them being Salman Khan. Really, one of the letdowns of the film is the rather flimsy role given to the big Khan, who's actually being promoted as the lead. Of the other 3 cameos, Bappi Lahiri's is the most bizarre. Then, Preity Zinta is someone you'd have to wait till the middle of the second half for, and the last is an unfortunate last-minute resuscitation effort that is hardly one.

MAMK is the story of a couple whose marriage is rocked by what the film calls "complicationsâ€. Raina (Kareena Kapoor) narrates the story, beginning with how rosy everything was and how cracks are starting to develop in their marriage of 2 years.

Raina is an orphan who's married to Sameer (Salman Khan), and whom she is grateful to for "giving her the surname that God didn't bother to giveâ€. They're settled in Melbourne, and Sameer was apparently doing well at work, until bad times set in in the present.

Hostile silence is a worse state of affairs than spiteful agitation, and when Sameer remains tight-lipped at home throughout his troubles, the concerned Raina ends up feeling helpless and desolate. Her endeavors to draw him out only result in aggression and unfortunate accusations about how uncaring she is about his pain.

On the advice of a friend, Sameer decides to move to Singapore, as usual not consulting his wife about the decision. Raina is not thrilled, but agrees to move. Sameer has a worse surprise in store for her â€" he wants her to go back to India until he regains the lost glory in his career.

Hurt and vulnerable, Raina gets a grip on life when her friends pitch in. Among them is a coffee-shop attendant at the airport, Akash (Sohail Khan), who falls for her. The rest of the movie is basically Akash's detached adoration for the married woman, which continues even after Sameer comes back to her.

Raina's character is essentially the meat of Main Aurr Mrs. Khanna, though the film would like us to believe it is Akash's. Raina is portrayed as a sensible person who, in the face of the cynicism of her friends, refuses to accept her marriage as broken. Sameer, on the other hand, is rather grouchy whenever he's around. The result is that confrontational scenes between the two are accompanied by a feeling of dread, much like in the family-misunderstanding movies of the '80s.

Akash's amore towards Raina seems to be, in principle, something a college student would fall prey to. Sohail Khan does not look the part, though he tries to act a whole 20 years younger, probably aiming to amuse the kids among the audience. His devotion lacks depth, and, thus, does not even merit a serious pursuit - a rule that the film again breaks, to a very silly effect, when Akash's friends try to split the re-united Khannas.

The main twist in the film revolves around an issue that is, in the first place, an avoidable one. Secondly, it could have been painlessly solved by some elementary across-the-table talk, and it seems contrived to build an entire plot section around it.

All that Main Aurr Mrs. Khanna has going for it, then, is some detailed characterization of the leading lady, and the much-anticipated item song by Preity Zinta. It's wonderful to see Preity on screen, even if it's in a blatantly unoriginal song, and the fact that her appearance carries more weight with the audience than with the film itself, speaks volumes about the kind of watch Main Aurr Mrs. Khanna is.

There are no fantastically shot scenes either, and setting the film in foreign locales even ends up making it look colder than it already is. The music is breezy, and the item song is among the better numbers.

MAMK is not a sob story, but it's hardly the kind of sparkling outing you'd want to give your family this Diwali. It's sure to hit the TV screens soon, so spend your moolah on something else this weekend.
Share. Save. Connect.
Tweet
MAIN AURR MRS KHANNA SNAPSHOT

ADVERTISEMENT
This page was tagged for
Main Aurr Mrs Khanna hindi movie
Main Aurr Mrs Khanna reviews
release date
Salman Khan, Sohail Khan
theatres list
Follow @fullhyderabad
Follow fullhyd.com on
About Hyderabad
The Hyderabad Community
Improve fullhyd.com
More
Our Other Local Guides
Our other sites
© Copyright 1999-2009 LRR Technologies (Hyderabad), Pvt Ltd. All rights reserved. fullhyd, fullhyderabad, Welcome To The Neighbourhood are trademarks of LRR Technologies (Hyderabad) Pvt Ltd. The textual, graphic, audio and audiovisual material in this site is protected by copyright law. You may not copy, distribute, or use this material except as necessary for your personal, non-commercial use. Any trademarks are the properties of their respective owners. More on Hyderabad, India. Jobs in Hyderabad.