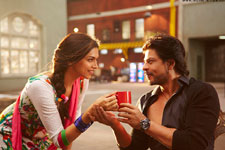 Kritika Deval / fullhyd.com
EDITOR RATING
4.0
Performances
Script
Music/Soundtrack
Visuals
6.0
3.0
6.5
7.0
Suggestions
Can watch again
No
Good for kids
Yes
Good for dates
No
Wait to rent it
Yes
When we're kids, we like to think that being a grown-up is the best thing in the world because grown-ups can do whatever they want. Then we actually grow up, and with that the best thing in the world becomes getting rich enough to do whatever you want. Bollywood royalty, however, is pooping all over this idea with every regurgitated mess that they serve you on a shiny platter with the expectation that you will throw money at it, no matter how long the mess has been masticated for.

There are 12 countries with GDPs lower than what Shah Rukh Khan is worth. 12. Whole. Countries. You'd think that that's enough money for someone to be able to start doing stuff for more than just the moolah, but we guess Maslow was just wrong, because Happy New Year doesn't give much of an indication that any of those involved put in more thought to the whole project than "Hey, here's yet another way to increase my already infinity-sized pile of money so why not do that while I still have people willing to eat up whatever poop I dish out?".

Because that is exactly what Happy New Year is, right from its "imaginative" title to its "wacky" plot to its "zany" characters to its "kitschy" production values - the shiny and well-presented poop that was left over after digesting a whole history of good ideas that also made a lot of money.

Let's begin with the plot. Chandramohan Sharma aka Charlie (Shah Rukh Khan) is a college graduate who is unemployed because daddy (Anupam Kher) died after being wrongfully implicated in a robbery by Charan Grover (Jackie Shroff). Not being the Gandhi-type, Charlie decides that the best way to get back at Grover is to actually rob him, which Grover makes especially easy by announcing that he is in possession of a lot of diamonds which are conveniently to be placed in a hotel in Dubai where an equally convenient dance competition is to take place. Just, don't ask.

For this purpose, he recruits "tech geeks" Temhton Irani (Boman Irani) and Rohan Singh (Vivaan Shah), Nandu Bhide (Abhishek Bachchan) because he looks like Grover's son, Jagmohan Prakash (Sonu Sood) because Farah Khan likes him for his body, and Mohini Joshi (Deepika Padukone) to teach all of them how to dance.

He calls them all his Angels, because, of course he does.

There isn't much more to the story apart from the fact that everything goes down exactly as you think it does, and it all goes down surprisingly fast. Oh, and the whole thing is appropriately glossy and shiny.

The problem is not the overt commercialization of the movie. The problem is that, unlike Farah Khan's previous films, Happy New Year does not even pretend to be a creative endeavour, which is sad because even the filmmaker's worst-faring projects have had an element of what-the-heck-ishness that kept things from getting too cynical. This movie, on the other hand, is nothing more than an acknowledgement of the fact that Shah Rukh has a lot of fans.

There are elements that you get hints of, like all of the other characters' back-stories, and a few moments in the plot, that show that this could've been a better movie. However, all you really see are stars doing what stars do, while talented actors with interesting characteristics are basically just put in to mislead people into thinking that it is in fact a better movie.

None of this is a fault of the actors themselves. Shah Rukh Khan and Deepika Padukone do exactly what they are each called upon to do. Vivaan Shah and Abhishek Bachchan are quite earnest in their portrayal of disappointingly half-hearted characters. Sonu Sood's abs are quite pretty, and Boman Irani is Boman Irani, which is how we like him best.

The music, as we all know, is quite catchy, and the videos are shot with all of the panache that Farah Khan can muster, which is a substantial amount of it. The production values are fantastic, again, because, of course they are.

None of this makes up for the fact that Happy New Year fails to justify its sole reason for existence - entertaining the heck out of its sheeple so it can take their money. If you feel the urge to walk out a short while after the interval, please don't be shocked. It is all too sadly understandable.
Share. Save. Connect.
Tweet
HAPPY NEW YEAR SNAPSHOT 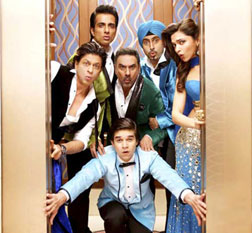 Pathetic would be an understatement. After getting hammered for 3 hours in the theatre, to come home and watch his statement on tv show where SRK claims this is the the best bollywood movie ever made, is like adding insult to injury. He has no right to play with the senses of indian audiences like this. If he has too much money to spend, instead of splashing on such nonsense, there are lot of other ways in which it can be put to better use. Except for couple of scenes and couple of songs, there is nothing else worth seeing in this torture. All aspiring directors, I would recommend watching this movie to learn HOW NOT TO MAKE a movie and HOW NOT TO COPY SCENES from other movies.

ADVERTISEMENT
This page was tagged for
Happy New Year hindi movie
Happy New Year reviews
release date
Shah Rukh Khan, Deepika Padukone
theatres list
Follow @fullhyderabad
Follow fullhyd.com on
About Hyderabad
The Hyderabad Community
Improve fullhyd.com
More
Our Other Local Guides
Our other sites
© Copyright 1999-2009 LRR Technologies (Hyderabad), Pvt Ltd. All rights reserved. fullhyd, fullhyderabad, Welcome To The Neighbourhood are trademarks of LRR Technologies (Hyderabad) Pvt Ltd. The textual, graphic, audio and audiovisual material in this site is protected by copyright law. You may not copy, distribute, or use this material except as necessary for your personal, non-commercial use. Any trademarks are the properties of their respective owners. More on Hyderabad, India. Jobs in Hyderabad.