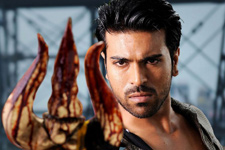 Fortunately, they did flip over the question paper to see the next question, "Make a good movie. 90 marks."

And check it is.

This week's testosterone package Nayak is, first of all, a potboiler made with the nimbleness of a chef who has mastered his paneer-butter-masala at the molecular level. It is the kind of film that makes formulas look easy to use, even as the hundreds of other people out there using the same formula keep getting it wrong and make you wonder how.

Clearly, some things are best done by the people who do them best.

Nayak is a flamboyant display of all those things you see only in Telugu movies - the hero tossing heavy-set people miles into the air, blunt/sharp objects ripping through flesh and skull, a leader who actually cares for people, complete defiance of everything you have ever studied in science class, lovely heroines atop spectacular European mountainsides, and Brahmanandam wearing capris.

If you're looking for the plot, then you must know that there is a do-gooder who is going about killing certain evil, powerful people, and that sometimes, Kajal Agarwal dances with Ram Charan (playing Cherry). Villain Gandi Babji (Rahul Dev) is after the hero because he is wooing his sister (Kajal Agarwal). After an hour and a half, you are told that there is more to this story than meets the eye.

Indeed, there is no apology for all the cliches and exaggerated story-telling devices used in Nayak. Neither is there an attempt to venture beyond them. Besides, Ram Charan's double role is little more than a way to get twice the number of baddies beaten up in the same frame. (Oh wait - it also serves a "larger" purpose. For example, there is a courtroom scene in which the two Ram Charans appear dressed alike, just to "confuse" the lawyers - and the judge actually adjourns the case because of this unexpected turn of events.)

Nayak works because things fall in place as neatly as in a well-behaved game of Tetris. Rarely does it bore you, and things in the plot happen for a reason.

Things do keep getting ridiculous. But every time they do, the focus is never on the ridiculousness of the situation - there is a clever set of conversations happening around it that deflect focus to the film's true strength, its humour.

There are human interest stories, too - once, the hero rescues street children forced to beg; and in another case, punishes a human-trafficking don.

This is not what will incite "ladies' sentiment", though. Nayak is a film made by men and about men, and is not even aimed at women. It contains a large amount of violence, mostly the graphic kind.

But it is notable that despite its violent content, it eventually ends up being a feel-good film, thanks to the brilliant comedy present in it all through. Let's move beyond Brahmanandam, and consider what exactly we have here - Jayaprakash Reddy and Posani. While Jayaprakash Reddy, as the uncle of one of the villains (Rahul Dev, who himself is in a semi-comic role), gets to spew lightning-sharp sarcasm, Posani is actually seen lending a whole other dimension to the stock villain-scenes that Pradeep Rawat exasperates us with. Then, there are also Venu Madhav and M S Narayana, sporadically throwing fun bits at us.

Ram Charan himself isn't an expert in comedy, though, and seems to also have trouble speaking Telugu quickly. He, however, looks good, and can easily act his way out of films like these. His dancing skills are also on full display here. On the whole, his impressive screen presence makes up for his raw edges.

The women are around mostly for the songs. Kajal Agarwal is the regular Telugu heroine, whose reason for existence is so the villain has an excuse to go after the hero (and vice versa), but she hangs around longer than Amala Paul does.

The songs are the filmi foot-tapping kinds, and have been filmed in spectacular locations. This version of Subhalekha Rasukunna grows on you, but Amala Paul botches it up with her bad lip-sync.

Nayak has been made on a large budget, and that is evident from the way the songs have been shot, mainly. Also, the action scenes seem to have have gotten more ridiculous. It is a pity that there are too many close-up shots of the villains, though, for a film that has at least three good-looking young people.

A fun film, this, but one that you're more likely to enjoy if you're male.
Share. Save. Connect.
Tweet
NAYAK (TELUGU) SNAPSHOT 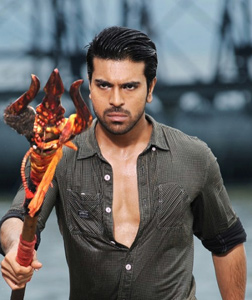 ADVERTISEMENT
This page was tagged for
nayak the leader telugu movie link
nayak full movie
nayak telugu full movie
nayak telugu movies
nayak telugu movie review
Follow @fullhyderabad
Follow fullhyd.com on
About Hyderabad
The Hyderabad Community
Improve fullhyd.com
More
Our Other Local Guides
Our other sites
© Copyright 1999-2009 LRR Technologies (Hyderabad), Pvt Ltd. All rights reserved. fullhyd, fullhyderabad, Welcome To The Neighbourhood are trademarks of LRR Technologies (Hyderabad) Pvt Ltd. The textual, graphic, audio and audiovisual material in this site is protected by copyright law. You may not copy, distribute, or use this material except as necessary for your personal, non-commercial use. Any trademarks are the properties of their respective owners. More on Hyderabad, India. Jobs in Hyderabad.