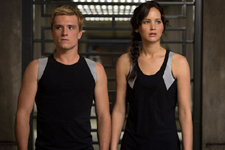 Nupur Barua / fullhyd.com
EDITOR RATING
8.0
Performances
Script
Music/Soundtrack
Visuals
8.0
7.0
8.0
6.0
Suggestions
Can watch again
Yes
Good for kids
No
Good for dates
Yes
Wait to rent it
No
Of all the young adult books that have flooded the market in recent times, The Hunger Games trilogy may not be the most popular, but it certainly is one of the most compelling works in the fields of science fiction and fantasy, as any critic will tell you. Unfortunately, with the kind of production value that the film adaptations of such books must deliver, one has to wait for a year, sometimes more, to catch the next instalment, and that can get tiresome. All said and done, The Hunger Games: Catching Fire, the movie, is a treat for fans and critics alike, and definitely one of the better films of this year.

The movie begins with Katniss Everdeen (Jennifer Lawrence) and Peeta Mellark (Josh Hutcherson) returning to District 12 as spectacular victors of the last Hunger Games. Their lives are pretty much sorted, but the President of the nation, Coriolanus Snow (Donald Sutherland), is not happy with the reception that Katniss gets from various districts. Fearing a rebellion of sorts, he threatens to harm her loved ones, unless she behaves herself - that is, pretend that she is ever grateful to the generous rulers of Panem - when she goes on the compulsory tour of all districts, with Peeta.

Katniss keeps up the pretence of the romance between Peeta and her, and slowly realises that the people of the country are not willing to be subservient any more. Concentrating more on saving her family from misfortune than on becoming the leader that her countrymen want her to be and that Snow wants to stop her from becoming, Katniss even suggests an engagement with Peeta just so that Snow can be happy.

Snow, however, has other plans for her. With the new head gamemaker, Plutarch Heavensbee (Philip Seymour Hoffman), Snow announces a twist in the 75th Hunger Games, citing the anniversary as a special one and therefore the new version. Katniss and Peeta find themselves involved again in the games, but this time, each one is determined that the other should survive. What Katniss does not know is that there is more to her competitors than meets the eye, and, as her mentor Haymitch Abernathy (Woody Harrelson) keeps telling her, she has to "remember who the enemy is".

Those who have read the book will be pleasantly surprised to note that the movie is a faithful version of the same. The most conspicuous difference is that District 13 becomes a topic of conversation when Katniss goes home after the tour, but in the movie, District 13 is not mentioned until the end. This decision to do away with this important plot point may have something to do with the makers not wanting to reveal the story of the next movie in the series, but fans may just be a bit disappointed with the omission.

After the first movie, the excitement in this sequel is slightly damp, but the continuity, as far as the desperation and depression are concerned, is maintained. However, too much emphasis is laid on Katniss (she is there in every frame) and less on her interpersonal relationships with her family and others. In fact, even her increasing dependence on Peeta is not dealt with appropriately, and her sudden loyalty towards him seems inexplicable - this style of characterisation is too close to the Twilight series for comfort, and we all know that The Hunger Games belongs to a better league of literature.

Plus, characters come and go, and their importance to the story is not clear. Tragically, the series of events that leads to the culmination of the games seems like a montage of unrelated sequences - the screenplay is weak, but the story itself has enough substance to override this slight technical/structural hiccup.

Jennifer Lawrence is Katniss, no matter how many other roles she does in her life. She fits the character like a glove, and you will forget that she is acting. Josh Hutcherson grows on you, and he no longer seems like an underage kid. There is too little of Liam Hemsworth. Woody Harrelson seems slightly indifferent towards his role, as does Lenny Kravitz, but the biggest disappointment is Philip Seymour Hoffman - or maybe he is saving all his strength for the next instalment.

Visually, this film is not as extravagant as the previous one, but it does have its moments. Most of them have to do with the costumes that Katniss wears, and she does justice to the costume department. Watch out for the mockingjay dress - it is a goose-bump moment.

The production value is apparent, especially since most of the movie was shot in the IMAX format. The cinematography is non-intrusive and suitable, but not breathtaking. The movie could have been edited better, and some of the more redundant scenes could have given way to more personal/emotional sequences. The music, of course, is legendary, because of the themes.

The next book, Mockingjay, will lend itself to two movies (part one and part two). The thrill of the story is such that one remembers what happened in the previous films, so the makers do not have to worry about the long gap, but fans would wish that they could churn out these films quicker. Despite the genre, here is a heroine we understand, and we admire, despite her young age, and we cannot get enough of her. 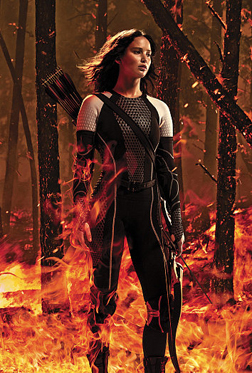 ADVERTISEMENT
This page was tagged for
The Hunger Games: Catching Fire english movie
The Hunger Games: Catching Fire reviews
release date
Jennifer Lawrence, Josh Hutcherson
theatres list
Follow @fullhyderabad
Follow fullhyd.com on
About Hyderabad
The Hyderabad Community
Improve fullhyd.com
More
Our Other Local Guides
Our other sites
© Copyright 1999-2009 LRR Technologies (Hyderabad), Pvt Ltd. All rights reserved. fullhyd, fullhyderabad, Welcome To The Neighbourhood are trademarks of LRR Technologies (Hyderabad) Pvt Ltd. The textual, graphic, audio and audiovisual material in this site is protected by copyright law. You may not copy, distribute, or use this material except as necessary for your personal, non-commercial use. Any trademarks are the properties of their respective owners. More on Hyderabad, India. Jobs in Hyderabad.