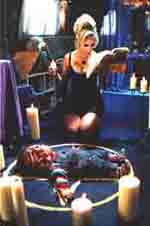 Chinmayi Sirsi / fullhyd.com
EDITOR RATING
1.0
Performances
Script
Music/Soundtrack
Visuals
NA
NA
NA
NA
Suggestions
Can watch again
NA
Good for kids
NA
Good for dates
NA
Wait to rent it
NA
The fact that the film started fifteen minutes late only rubbed it in. Bride Of Chucky gives you enough other reasons to dislike it. Since it calls itself a horror movie, what choice has it but to start on a dark, sinister, rainy night, with a man walking into a "Police Evidence Depository" (do such places really exist?) and walking out with a bag that looks suspiciously like it contains something dead? And wonder of wonders, it does in fact contain the cut up face of a dead man. This is how original the rest of the movie is, too.

Tiffany, a siren with a particular fondness for dead bodies, is looking for a way to bring her dead lover to life. Her undying quest for a dead cause leads her to the creation of an ugly puppet whose face she stitches together with dead skin (how cool!). She then uses her book "Voodoo For Dummies" to pour life into it. See, these guys got a sense of humor, too. I hope for their sake that no real voodoo practitioner ever catches this flick.

Once alive, Chucky (as he is now called) wastes no time. He promptly kills the first man in sight, with enough blood and gore to make your stomach turn. All is well otherwise until he has a tiff with his creator, and electrocutes her when she is in a bath tub (I told you about the originality bit).

But Tiffany, of course, does not die. Her soul finds expression in another doll. So now you have two dolls for the price of one, and they both want human bodies to transform themselves back into humans. This can apparently be done with the help of a pendent that hangs around Chucky's real body, which now lies buried in the cemetery. And that's where our dolls are headed. And then it's more murders and more gore and much lesser sense.

Even granting that it's the terror element and not originality that is the numero uno objective for a horror flick, the film doesn't have any redeeming features. The ugly, grotesque dolls with blue eyes and sadistic ideas are more repulsive than terrifying. You also get the feeling that these guys are trying to be funny at times, but the big joke is on you. This is horror for dummies.
Share. Save. Connect.
Tweet
BRIDE OF CHUCKY SNAPSHOT

ADVERTISEMENT
This page was tagged for
Bride Of Chucky english movie
Bride Of Chucky reviews
release date
John Ritter, Jennifer Tilly
theatres list
Follow @fullhyderabad
Follow fullhyd.com on
About Hyderabad
The Hyderabad Community
Improve fullhyd.com
More
Our Other Local Guides
Our other sites
© Copyright 1999-2009 LRR Technologies (Hyderabad), Pvt Ltd. All rights reserved. fullhyd, fullhyderabad, Welcome To The Neighbourhood are trademarks of LRR Technologies (Hyderabad) Pvt Ltd. The textual, graphic, audio and audiovisual material in this site is protected by copyright law. You may not copy, distribute, or use this material except as necessary for your personal, non-commercial use. Any trademarks are the properties of their respective owners. More on Hyderabad, India. Jobs in Hyderabad.