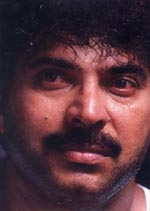 EDITOR RATING
3.0
Performances
Script
Music/Soundtrack
Visuals
NA
NA
NA
NA
Suggestions
Can watch again
NA
Good for kids
NA
Good for dates
NA
Wait for OTT
NA
Railway Coolie is a shameless remake of the 1980s Amitabh Bachchan starrer Deewaar. Set in 2001, it neither has the dark atmosphere of the original nor the emotional elements that made that film a legendary success. Mamooty's cult status in Kerala might draw people to the theaters, but the story and the narration are just not convincing enough to merit any attention.

Prabhu (Mamooty) is a railway porter who sings songs with his fellow beings, exposes wrongdoers in the railway station and outside, and becomes something of a cult figure. His daredevil actions put a spanner in the works of the malicious Devudu and Chowdaraiah alias Yerrodu. Chowdaraiah is the kingpin among smugglers, and realizes the potential of Prabhu. And so, by carefully crafting a series of incidents that go against the interests of his family, he slowly draws him into his fold.

One fallout of Chowdaraiah's actions is that Prabhu's sister Lakshmi (Roja), who has high hopes of becoming a police officer, is denied the job. This and a couple of other incidents make Prabhu realize that it is futile to fight them anymore, and he becomes a party to their nefarious activities. He steadily works his way up the ladder in his group and becomes No. 2, next only to the boss.

As you may expect, a couple of scenes after his becoming a smuggler, his family members come to know of it. And Lakshmi (playing the role of Shashi Kapoor in the original) swears to put him behind bars. Then there are the constant conscious pricks that eat away at the innards of this once honest man.

The stupid drama rolls on and on in the most insipid way. There is not one incident or event in the film that is worth mentioning. With so many Telugu actors in the film and directed by ace Tollywood director Kodi Ramakrishna, one wonders whether it is a dubbed film (from Malayalam) or a Telugu film. The music is uninspiring, the artwork is horrible and the dialogues are none too impressive, either.
Share. Save. Connect.
Tweet
RAILWAY COOLIE SNAPSHOT