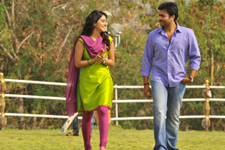 Swaroop Thotada / fullhyd.com
EDITOR RATING
6.0
Performances
Script
Music/Soundtrack
Visuals
6.0
6.0
6.0
6.0
Suggestions
Can watch again
No
Good for kids
No
Good for dates
Yes
Wait to rent it
No
Just before the interval, there is a scene in Shankara that goes like this. Three policemen take three hapless young men to the heart of a forest, to fake an encounter as a way of covering up a different crime. But as they are about to execute them, their ACP calls one of them to call off the encounter. But the battery dies, and the other two have not brought cell phones.

Now they are confused. Two of them leave to find a phone to make a call, and one stays back. The two call the ACP on a coin phone and get clarity, but their vehicle then dies and won't start. The only way to contact the officer in the forest is through a walkie talkie, but it won't catch a signal. They find an old bicycle lying nearby and start riding, fishing for a signal.

This elaborately narrated scene is composed mainly of long takes and wide-angled shots, and stretches on for a leisurely 10 minutes. The camera pans and tilts with an accurate pace and timing, and the near-perfect acting makes it even more engaging. Such a scene which you would normally expect only in a Coen Brothers' or Tarantino's film is a pleasant surprise, but here it appears as if it is from an entirely different movie. This is because the rest of the film doesn't quite catch up to it.

Shankara (Nara Rohit) is the tale of an oddball introvert, whose innocence and straight-arrow attitude don't let him fit in the society around him. While the Tamil original Mouna Guru successfully pulled off a convincing portrayal of this character and the drama around it, this remake suffers from bad casting. Nara Rohit is utterly unconvincing as a student. He emotes well, but is betrayed by his face that is blatantly honest about his age.

Anyways, friction develops between him and his collegemates when Shankara is simply busy being himself. In the real world people like that are more likely to end up getting beaten, but good for Shankara, he knows how to flex muscles and put them to good use.

As if his existing troubles are not enough, he ruffles the feathers of a corrupt ACP (John Vijay) as well. The ruthless twists and twirls of fate land him in a soup, and he ends up being chased by the evil ACP and his equally abominable subordinates. That's where the ride starts.

A handycam or CD or MMS that has something to do with the dark and dirty secrets of an influential criminal, has been the staple for thrillers for so long. This movie employs the same plot device but makes quite effective use of it. The first half switches between the ACP's crimes and the scenes that establish and elaborate Shankara's character, and they feel almost disjoint. But that doesn't fully render the film unengaging, thanks to the meticulous narration of the crime-track that slowly builds the plot.

What botches the experience is the pointless romantic track between Shankara and Ananya (Regina Cassandra) that is starved of chemistry and wit. Also, the scenes featuring Shankara's interactions with his family are supposed to throw more light on his personality, but the undeveloped characters of his family members rob from the potential conflict. And while Shankara's ineptitude in syncing with the practical world is supposed to evoke our sympathy, those scenes fail to make any impact.

The film is reasonably engaging as long as it sticks to the thriller part. The cat and mouse game turns to a promising game of wits, but the film's greed for cinematic thrills pushes it into a contrived second hour and an unapologetically cinematic climax.

For a change, and a welcome one at that, the fights are less dependent on ropes, and intensely composed and passionately shot. However, most of the visuals have a low-budget feel to them. The songs are easy on the ears. The dialogues are down-to-earth, save for the occasional punch dialogues.

Nara Rohit delivers a composed and calculated performance. Regina tries hard to shine in a role that does not have much importance. Rajeev Kanakala excels, delivering a spot-on performance. Chinna, Ahuti Prasad and M S Narayana deliver what is expected. John Vijay's over-animated expressions are a distraction sometimes, but the black-and-white characterisations this film subscribes to make them look less odd.

Shankara is a film that was in the cans for quite a while and has been given a limited release. The theatre was almost empty, given the non-existent hype. But it deserves better.
Share. Save. Connect.
Tweet
SHANKARA (TELUGU) SNAPSHOT 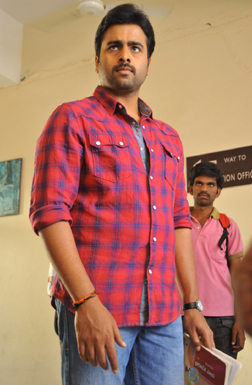 ADVERTISEMENT
This page was tagged for
Shankara (Telugu) telugu movie
Shankara (Telugu) reviews
release date
Nara Rohit, Regina Cassandra
theatres list
Follow @fullhyderabad
Follow fullhyd.com on
About Hyderabad
The Hyderabad Community
Improve fullhyd.com
More
Our Other Local Guides
Our other sites
© Copyright 1999-2009 LRR Technologies (Hyderabad), Pvt Ltd. All rights reserved. fullhyd, fullhyderabad, Welcome To The Neighbourhood are trademarks of LRR Technologies (Hyderabad) Pvt Ltd. The textual, graphic, audio and audiovisual material in this site is protected by copyright law. You may not copy, distribute, or use this material except as necessary for your personal, non-commercial use. Any trademarks are the properties of their respective owners. More on Hyderabad, India. Jobs in Hyderabad.