Anna And The King Review 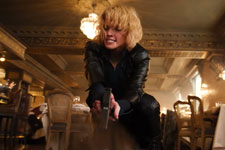 Arpan Panicker / fullhyd.com
EDITOR RATING
9.0
Performances
Script
Music/Soundtrack
Visuals
NA
NA
NA
NA
Suggestions
Can watch again
NA
Good for kids
NA
Good for dates
NA
Wait for OTT
NA
At last, a movie that in a touching and convincing manner portrays the chain of events that were instrumental in forming the country known, today as Thailand. Jodie Foster as Anna and Chow Yun-Fat as the King have a chemistry working on-screen that delights when their conflicts are portrayed, and really moves you through the intricate subtleties in their relationship.

The story of Anna Leonowens is famous. The world has come to know about it through the diaries that she maintained during her stay in Siam. A widowed teacher of English descent stationed in India, Anna, is summoned to become the tutor to the son who is the heir to the King of Siam.

She is a fiercely independent women who dares to stand up to the king and talk againts the atrocities that are dealt upon the common people because of the rigid social structure and the slavery system prevalent in Siam. The conflict between a powerful man and a powerful woman has always been at the heart of great love stories, especially when the woman is the one challenging the man's authority and superiority. In Anna's case, significant cultural differences must be overcome as well, but she is ultimately to claim her place as the King's equal.

The rules in Siam are pretty rigid and the King, elevated to the position of a demigod, is pretty stubborn at times when the subject of reforms is broached, but Anna refuses to take no for an answer, whether she is attempting to free a slave, treating a prince like any other student, or speaking her mind in public and private. Though it is usually Anna who confronts the King with one issue or the other, the King does get back at her once in a touching confrontation, when he asks her, "What does it mean to be truly a woman, and not just a widow, a mother and a teacher?"

The relation between Anna and the King is beautifully picturised keeping in mind the delicate subtleties involved. Anna comes across as a strong character, who, in spite of the various stresses that she undergoes, emerges with an emphatic victory. She refuses a lavish gift from the King because of the strings that might be attached.

The story captures the cultural intricacies of an exotic civilisation that has faded out. The King has a harem that has 26 wives and 60 odd children. The characterisation of these has been done well, and in spite of fleeting appearances, some of the children do sort of grow on you. There are some tender moments when the lives and the dilemmas of the women in his harem are explored.

The movie does include moments of action and military exploits, but is, at its core, nothing but a breathtaking study of the relation between Anna and the King. Jodie Foster and Chow Yun-Fat literally live their roles and carry the movie on their able shoulders. All said and done, this is a film that will go down in the movie archives as a classic to be remembered.
Share. Save. Connect.
Tweet
ANNA AND THE KING SNAPSHOT

ADVERTISEMENT
This page was tagged for
Anna And The King english movie
Anna And The King reviews
release date
Chow Yun-Fat, Jodie Foster
theatres list
Follow @fullhyderabad
Follow fullhyd.com on
About Hyderabad
The Hyderabad Community
Improve fullhyd.com
More
Our Other Local Guides
Our other sites
© Copyright 1999-2009 LRR Technologies (Hyderabad), Pvt Ltd. All rights reserved. fullhyd, fullhyderabad, Welcome To The Neighbourhood are trademarks of LRR Technologies (Hyderabad) Pvt Ltd. The textual, graphic, audio and audiovisual material in this site is protected by copyright law. You may not copy, distribute, or use this material except as necessary for your personal, non-commercial use. Any trademarks are the properties of their respective owners. More on Hyderabad, India. Jobs in Hyderabad.