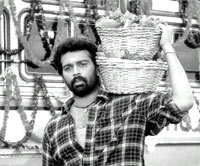 EDITOR RATING
3.0
Performances
Script
Music/Soundtrack
Visuals
NA
NA
NA
NA
Suggestions
Can watch again
NA
Good for kids
NA
Good for dates
NA
Wait to rent it
NA
Not too many people will be laughing after this. We're including the crew with the subjects (that's you and us).

It's hard to think that a person with the experience of Kodi Ramakrishna can come out with things like this. It's not right to expect experienced directors to come out with winners every time, but you'd expect some class to their movies. This one looks like it's been thought up as it was being shot.

Navvutoo Batakaliraa is about a hardworking guy Ganesh (Chakravarti), who is a kind of hawker, a commission agent for a travel bus between Annavaram and Rajahmundry. He keeps goading passengers to board the bus operated by Giri Babu, named Sabarigiri Travels. The director tries to tell us that it is because of the singsong hawking talent of Ganesh that even though Giri Babu has just one bus, his collection matches that of all the buses owned by his rival Kaka Krishna Murthy. Understandably there is a cold war between Murthy and Giri Babu that runs on farcical lines without in any way tickling the funny bone of the audiences.

As this stupid drama unfolds, Jayamma (Deepti) falls in love with Ganesh, and desperately tries every trick to get him. Again this is done for comic effect, and again, doesn't gel. Jayamma fails not because Ganesh hates her, but because he is in love with his owner's daughter Dr Sandhya (Malavika).

It looks like Ganesh will make it big by marrying Sandhya, but a couple of songs later the truth is out - that Ganesh is directly or indirectly responsible for ruining the life of Sarala (Uma). Who's this now? She's someone symptomatic of the malaise of this movie - too many characters. Sandhya comes to know of Uma, and there is the inevitable misunderstanding.

Kodi Ramakrishna ties himself in knots at every turn and to untie himself he introduces more and more characters to such an extent that we keep wondering all through if any more characters will come on the scene and surprise. The surprise element is not restricted to the number of characters alone - you also are wondering (figuratively speaking) who Chakravarti would marry, with four heroines on the scene. Ultimately, however, the veteran surprises you with a twist that even the stupidest of directors would not have conceived of.

Poor Chakravarti is in such a bad shape that there seems to be no light at the end of the tunnel. With every film after Kodanda Ramudu bombing, he should realize that the criterion should not be the number of films, but the quality of the films. Otherwise there will be no arresting the downward trend of his career.

Of the heroines, only Malavika seems to look a little interesting - maybe because she hogs the limelight with a couple of songs. The comedy essayed by the Sudhakar - Babu Mohan duo is crude, stale and uninteresting.

ADVERTISEMENT
This page was tagged for
telugu movie navvuthu bathakalera cast
Navvuthu Bathakaaliraa telugu movie
Navvuthu Bathakaaliraa reviews
release date
Chakravarti, Malavika
Follow @fullhyderabad
Follow fullhyd.com on
About Hyderabad
The Hyderabad Community
Improve fullhyd.com
More
Our Other Local Guides
Our other sites
© Copyright 1999-2009 LRR Technologies (Hyderabad), Pvt Ltd. All rights reserved. fullhyd, fullhyderabad, Welcome To The Neighbourhood are trademarks of LRR Technologies (Hyderabad) Pvt Ltd. The textual, graphic, audio and audiovisual material in this site is protected by copyright law. You may not copy, distribute, or use this material except as necessary for your personal, non-commercial use. Any trademarks are the properties of their respective owners. More on Hyderabad, India. Jobs in Hyderabad.