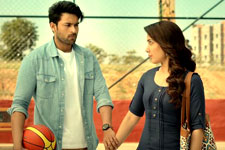 Daphne Rose / fullhyd.com
EDITOR RATING
7.5
Performances
Script
Music/Soundtrack
Visuals
8.0
8.0
9.0
8.0
Suggestions
Can watch again
Yes
Good for kids
Yes
Good for dates
Yes
Wait to rent it
No
The family that gave Telugu-land icons like Megastar Chiranjeevi, Power Star Pawan, Stylish Star Allu Arjun and Mega Power Star Ram Charan (like what even) can now successfully lay claim to another one of those tongue-twisting sobriquets with the Konidela youngster Varun Tej, who scores yet another home run with his latest flick Tholi Prema. With this and his last outing, the immensely successful Fidaa, the actor now has two back-to-back hits - by no means an easy feat considering just how difficult it is for movies to click at the box office these days.

Tholi Prema, a story of first love and the lasting impact it creates on the individuals involved, features Varun Tej as Adhi and Raashi Khanna as Varsha, two youngsters who first meet aboard a train to Hyderabad. One of the two falls in love at sight, the other takes their time, but soon enough, and not without some generous help from Thaman's excellent musical score, the duo make up, break up and make up again, fully gratifying the audiences in the process.

Now considering just how hackneyed this whole boy meets girl plot line can be, it's a wonder just why our filmmakers, and the audiences even, keep gravitating back to this genre like moths to flame. The key, like we all know, lies in the treatment of the story, not just from the director's side but from that of every individual actor in the film, and that is where Tholi Prema scores.

Watching the movie, you might not realize that it is the director's debut film - such is the finesse with which it has been crafted. Venky Atluri takes pains to keep the film lovable, light and clean. The interspersing of the romance and comedy tracks is good, the laughs are aplenty and that too without having to resort to cheap humour (hallelujah), and the focus solely remains on the leads as they navigate the testing waters of love and all the joy and heartache it can bring along with it.

The pairing of Varun Tej and Raashi Khanna is fresh, and more importantly, believable. Varun Tej as Adhi has great screen presence and brings out his parts well, be they romance or action. Raashi Khanna is cute, and you can see why her fans refer to her as #andalaraashi. She, too, portrays her character well, and is by no means overshadowed by her counterpart's regional or physical stature, a fact that is rather commendable.

The supporting cast, too, provides a nice background for the leads to play off of. Special mention must be made of Suhasini as Adhi's mother, Vidyullekha Raman as a college senior and Hyper Adhi as the duo's friend for their impactful, even if small, roles.

Another huge asset to the movie is music director Thaman's score. The songs and the BGM are living-breathing entities onto themselves that add a spectacular effect to the proceedings. Songs like Ninnila and Sunona Sunaina in particular are quite hummable. The choreography of the various songs, too, is apt, with most of the heavy lifting in the dancing department done, surprisingly, by Varun Tej. Come to think of it, there isn't a dance sequence involving Khanna as such, but given that the movie is told from the male lead's perspective, it perhaps makes sense.

The visuals and cinematography manage only a cursory mention, since of late all Telugu movies have really amped up on production values.

Tholi Prema is overall a good movie, and one that will do well at the box office. But if you're wondering why if all was that hunky-dory we did not give it an 8 or a 9, well, for some reason the movie doesn't *really* tug at your heart. The reviewer, for one, a glob of mushy feelings and easy tears on most days, did not feel any sense of urgency or despair at the lead's parting, or a sigh of contentment when they did eventually get together - a pre-requisite for all romance movies, if you ask us (if a chick ain't swooning over the lead character by the end of the movie, you know it's fallen flat somewhere - after all, there's a reason Mr. Darcy is every woman's dream nearly two centuries after his birth on paper).

But hey, it's early days for the director yet. Here's hoping his next venture is the epic love story we know is still somewhere out there. Till then, Tholi Prema should do just fine. Looks like you do know what to do for this Valentine's Day, after all.
Share. Save. Connect.
Tweet
THOLI PREMA (2018) SNAPSHOT 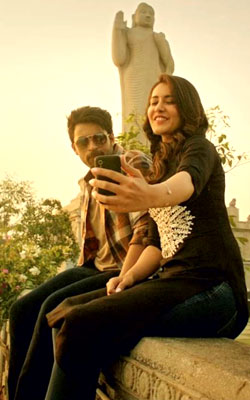 ADVERTISEMENT
This page was tagged for
tholi prema telugu movierulz
tholi prema movierulz telugu 2018
tholi prema full movie 2018
tholi prema movie 2018
Tholi prema xxx
Follow @fullhyderabad
Follow fullhyd.com on
About Hyderabad
The Hyderabad Community
Improve fullhyd.com
More
Our Other Local Guides
Our other sites
© Copyright 1999-2009 LRR Technologies (Hyderabad), Pvt Ltd. All rights reserved. fullhyd, fullhyderabad, Welcome To The Neighbourhood are trademarks of LRR Technologies (Hyderabad) Pvt Ltd. The textual, graphic, audio and audiovisual material in this site is protected by copyright law. You may not copy, distribute, or use this material except as necessary for your personal, non-commercial use. Any trademarks are the properties of their respective owners. More on Hyderabad, India. Jobs in Hyderabad.