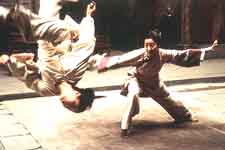 Feroz Hassan / fullhyd.com
EDITOR RATING
9.0
Performances
Script
Music/Soundtrack
Visuals
NA
NA
NA
NA
Suggestions
Can watch again
NA
Good for kids
NA
Good for dates
NA
Wait for OTT
NA
Jet Li is cool, Jackie Chan is funny, John Woo is breathtaking and now Chow Yun-Fat is an intense performer. Suddenly, the Orient is cool. But director Ang Lee is a bit of a puzzle. Hailing from the land of the arts of the physical variety, he goes on to work on an English classic for the screen and does an honest job of it, and then decides that it's time to indulge his childhood fantasies. He crosses over and crosses back, something not even John Woo can do to such extremes.

The screen manifestation of Lee's fantasies is an awesome interplay of drama, romance and sleight-of-the-hand action that has the best elements of a legend and a classic, but sometimes ends up looking like a children's film. An intriguing mixture of pop and tradition is Crouching Tiger...

Li Mu Bai (Yun-Fat) is a legendary warrior of an exclusive clan who decides to call it a day by returning his sword, the 'Green Destiny', to a noble man in Beijing. He calls upon his confidante, Shu Luen (Yeoh), to do the job. There is an unspoken love between the two that may be the reason for Mu Bai's decision. In Beijing, the Green Destiny is stolen by a masked thief and the suspects are the governor's daughter, Juen (Zhang Zi Yi) - a beauty who wants to be more than just that - and her governess, Jade Fox.

Duels between the masked thief and Shu Luen and Mu Bai ensue and the Green Destiny finds itself shuttling between all parties. Jade Fox is the shrewd villain who had earlier stolen the training manual of the clan of Mu Bai and had poisoned his master. Juen on the other hand falls for a bandit (Chang Chen) and elopes from her marriage ceremony.

So, there you have it all - unrequited and forbidden love, vendetta, honor and kung fu, making for, perhaps, the most complete Chinese film ever. A great script is very well complemented by controlled performances and some outstanding behind-the-scenes work. The art design and cinematography are just out of the world, while the music score is sheer novelty. Orientalism hasn't been compromised one bit.

All this talk of wire fighting is just too over-the-top. The characters scale the walls like lizards, fly or just float in the air and so on, but they just end up looking like puppets. It may be okay in a futuristic movie like The Matrix, but for actioners like Romeo Must Die and especially martial arts movies, these things are better left out. For most, even now, just ten minutes of vintage Jet Li or Jackie Chan is worth the price of that ticket any day.

However, if you are comfortable with this bit, taking it to be all right in the larger-than-life setting, then there is nothing to beat the experience of Crouching Tiger hidden Dragon, right now.
Share. Save. Connect.
Tweet
CROUCHING TIGER HIDDEN DRAGON SNAPSHOT

ADVERTISEMENT
This page was tagged for
Crouching Tiger Hidden Dragon english movie
Crouching Tiger Hidden Dragon reviews
release date
Chow Yun-Fat, Michelle Yeoh
theatres list
Follow @fullhyderabad
Follow fullhyd.com on
About Hyderabad
The Hyderabad Community
Improve fullhyd.com
More
Our Other Local Guides
Our other sites
© Copyright 1999-2009 LRR Technologies (Hyderabad), Pvt Ltd. All rights reserved. fullhyd, fullhyderabad, Welcome To The Neighbourhood are trademarks of LRR Technologies (Hyderabad) Pvt Ltd. The textual, graphic, audio and audiovisual material in this site is protected by copyright law. You may not copy, distribute, or use this material except as necessary for your personal, non-commercial use. Any trademarks are the properties of their respective owners. More on Hyderabad, India. Jobs in Hyderabad.