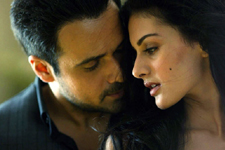 Zehra Abbas / fullhyd.com
EDITOR RATING
5.0
Performances
Script
Music/Soundtrack
Visuals
4.5
4.5
5.0
5.5
Suggestions
Can watch again
No
Good for kids
No
Good for dates
No
Wait for OTT
No
After watching Mr. X, we are happy to tell the makers at Vishesh Films that they can confidently expect a large, albeit invisible audience for their tale about an invisible vigilante.

The film opens with Raghuram Rathore (Emraan Hashmi) and Siya Tewari (Amyra Dastur), the two best agents of the Anti-Terrorism Department, on the scene of a hostage crisis. The two agents, who are also romantically involved (you will curse the romantic track of the film later), kill the terrorist, defuse the bomb and rescue a busload of people without breaking into a sweat. Segue into unnecessary fireworks and waterworks by the suddenly traumatised girlfriend, segue into a cheesy proposal by the rash boyfriend, segue into an unnecessary song, segue into... oh, you get the picture. Actually, if you do get the picture, please explain it to us, too, because we sure didn't get it.

Cut to ACP Bharadwaj (Arunoday Singh), who assigns Raghu and Siya to a secret mission to protect the Chief Minister from a possible assassination attempt. Long story short, the big twist is that (spoiler alert, but only if you can't get from point A to B on your own) the ACP and his men are in cahoots with the CM's son to blackmail Raghu into carrying out the assassination. The interesting part here is the sinister motivation of the villains; the ACP wants to become the Commissioner, and the CM's heir apparent, his son, wants to become the CM. Err... so they went to all this trouble because they were in a hurry? Okay, Mr. Vikram Bhatt. Whatever you say.

Raghu is captured by the baddies who take him to an abandoned factory and blow the place sky high. There's a huge explosion, the building is blown to pieces, and all that remains is ashes and debris. At least that's the conclusion that India's ATD arrives at after a thorough - yes, thorough - sweep of the location. All they missed was Raghu, artfully hidden under a couple of wooden planks.

Raghu is alive but horribly injured. He stumbles out from under the planks with boots intact, jeans intact, jacket intact, but hair gone! Oh, the shuddering horror of his tragedy. While we're at it, can the production team share the brand name of Raghu's miraculously durable jeans? We'd like to get a pair.

The lazy plot now turns to the loyal friend / helpful puppy character Popo (Tanmay Bhatt), whose sister works in a pharmaceutical company and comes to the scientific conclusion that Raghu's cellular structure has been altered due to radiation. What's that, you say? Radiation? It remains a mystery, like much of the story's plot points.

Anyway, she gives Raghu an anti-radiation drug, but the catch is that it hasn't been tested - as she says, "chuhe par bhi nahin". And yes, she says that with a straight face and in all seriousness, as Raghu lies writhing in pain in a tub of ice water. Raghu decides to risk becoming her lab rat or the first "chuha" and he drinks the drug.

Following a strangely funny Frankenstein moment, Raghu turns invisible. He has healed completely, but can be seen only in direct sunlight and blue neon light. Perhaps the shock makes Raghu temporarily insane because he starts walking into stacks of empty cardboard boxes to demonstrate his new power to no one in particular. Once he has calmed down, he decides to use his superpower to take revenge on the villains. And thus, we witness the birth of a totally unimaginative and boring superhero vigilante.

You have to take writer and director Vikram Bhatt to task for the writing. The protagonist is invisible, for God's sake - go crazy with the concept! But Bhatt just drives us crazy with trite situations. Sample this: Siya discovers that Mr. X is actually Raghu not through her superior skills as a top ATD agent but due to Eau de Emraan - she smells him out thanks to his "bheeni, bheeni khusboo".

What follows are utterly pointless chase sequences as Raghu targets the baddies and Siya tries to stop him. When he finally tells her the truth about what had really transpired, you want to smack him and ask, "Itna time kyun waste kiya?" And the denouement of the film is as predictable and bland as the rest of it.

Now, on to the actors. If you're an Emraan Hashmi fan then you can brave this film because he has elevated adherence to the cheesy Bhatt formula to an art form. There is no variation, no change and no growth on display in his performance, and he has the gumption to do this with swag. Slap him on the back or on his face; you decide.

Amyra Dastur is undoubtedly one of the prettier faces to make a foray into Bollywood recently, but she's very young and very raw so let's hope that she learns the ropes fast.

Arunoday Singh just might have been able to deliver a better act and give us a more menacing antagonist, but the writing and direction don't give him the scope to do so. Tanmay Bhatt, who's been in the news for the AIB Roast, is a talented standup comic, but the filmmakers fail to capitalize on his talent, and the film is dour and unfunny, a serious flaw when you're playing around with an entertaining premise like an invisible hero. Heck, even Mr. India was funnier.

The 3D is pointless and you'll actually forget those glasses sitting on your nose because there isn't a single standout 3D sequence. The special effects remain depressingly B-grade, and mar even the turning point of the film, when Raghu becomes invisible. That part is lifted straight from Hollow Man, which boasts of better SFX even though it was made 15 years ago.

Emraan Hashmi has enjoyed great luck when it comes to the music of his films, but it runs out here. The music by Ankit Tiwari and Jeet Ganguly is dull and weighed down by repetitive sounds. Even the moderately hummable title track sounds like a weird spoof of a Bond song.

Another Hashmi staple, the kiss, has also been messed up spectacularly in Mr. X. The award for the Worst Emraan Kiss Ever (drum roll, please) goes to Amyra Dastur puckering up underwater to an invisible Emraan Hashmi as his watery outline opens and closes its mouth like a dying fish.

The biggest letdown of Mr. X is the captain of the ship - Vikram Bhatt. Full marks for a great idea, but then he ruined it with a plot dulled by an utter lack of imagination and irrational gaps that pull the audiences out of the movie-watching experience. The direction too requires a certain polish and sophistication - if all the actors yell at the tops of their voices while doing emotional scenes, then you have to point an accusatory finger at the director.

Today's audiences might get nostalgic about Mr. India and laugh indulgently at its flaws, but films like Mr. X, made in 2015, will be greeted only with derisive jeers. The Bhatt camp needs to up the quality of its future ventures if it wants to move away from the B-grade moniker.
Share. Save. Connect.
Tweet
MR. X SNAPSHOT 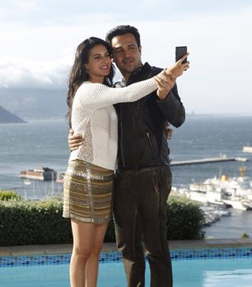 ADVERTISEMENT
This page was tagged for
chote kirakh hyderabad mr.x
Mr. X hindi movie
Mr. X reviews
release date
Emraan Hashmi, Amyra Dastur
Follow @fullhyderabad
Follow fullhyd.com on
About Hyderabad
The Hyderabad Community
Improve fullhyd.com
More
Our Other Local Guides
Our other sites
© Copyright 1999-2009 LRR Technologies (Hyderabad), Pvt Ltd. All rights reserved. fullhyd, fullhyderabad, Welcome To The Neighbourhood are trademarks of LRR Technologies (Hyderabad) Pvt Ltd. The textual, graphic, audio and audiovisual material in this site is protected by copyright law. You may not copy, distribute, or use this material except as necessary for your personal, non-commercial use. Any trademarks are the properties of their respective owners. More on Hyderabad, India. Jobs in Hyderabad.