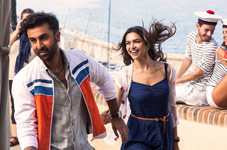 Josh / fullhyd.com
EDITOR RATING
6.0
Performances
Script
Music/Soundtrack
Visuals
8.0
7.0
7.0
8.0
Suggestions
Can watch again
No
Good for kids
No
Good for dates
Yes
Wait to rent it
Yes
Ved grew up in a magical place. Well, technically, he grew up in Simla, which is quite a lovely place in its own right, but the place we are talking about is called "Once Upon A Time...". Over there, Ved lived with so many stories. From Ram to Majnu to Odysseus, he could be each one of them. Stories of many religions, languages, and kinds, he embraced them all. He barely had time to stop and think if any of it made sense. Because he wasn't the kind of child to question "Is magic real?" while he was preoccupied with "Isn't the real magical?"

It is this Ved (Ranbir Kapoor) that Tara (Deepika Padukone) chums up with for a week in Corsica. They enter a pact of anonymity and vow to not meet each other after this one week. The anonymity affords them the possibility of living in the moment and they have a rollickingly good time for a week until they part ways never to meet again. Except, Tara, having had a whiff of the magical world where she belongs to, but can't summon by herself, decides to find the wizard who unlocks the enchanting storyland for her.

When, in four years, she finally tracks Ved down, she notices that the flamboyant wizard had watered down to a meek project manager in a telecom company. This Ved here, he talks of companies, of brands, and wonders about real estate. Nothing of roles, backdrops or stories. Suddenly, it appears to Tara, the wizard was lost in Corsica. He, now, was just a story, one which you start with "Once Upon A Time".

Imtiaz Ali takes this premise and writes a coup out of it. Tamasha is his finest screenplay yet - he does an amazing job of "Show, Don't Tell". Right from the raconteur in the hills (Piyush Mishra is fabulous as always) who feeds stories to little Ved, down to Ved's manic interactions with Tara when he comes to face his demons, the scenes are practically flawless in conception.

Ranbir Kapoor is superb. Both as the spontaneous story-teller and as the normative corporate executive. More so, he is explosive as the latter who's trying to reconcile with the former. As you'd expect, the final portions of Tamasha deal with Ved's agitated attempts to find a resolution to his problems, a befitting ending to his story. Kapoor honestly brings out the angst and the mania.

Padukone's Tara is assertive, but yielding (among the marvels of Imtiaz's writing are his female characters - their flaws don't look like a lack of strength but more the shady yin to the sunny yang). She hesitates to make the first move or pursue the guy she likes (because, you know, it's the guy's job, blah blah blah) but eventually, she chooses to do what she pleases. Padukone is terrific as Tara - it is plain amazing to see someone start off so wooden (still can't get over Om Shanti Om, sorry) and transform into so convincing an actor. She was brilliant in Piku and continues the form here.

Ravi Varman (cinematography) makes good with the alluring landscape of Corsica just as he does with the claustrophobic gloominess in the dim-lit date environments. Frenetic editing is called for when Ved's many stories seem to run parallelly and also when his daily routine starts showing mild variations, and editor Aarti Bajaj more than delivers.

The music is by this guy we won't take the name of. It appears we've come to expect way too much from him, expecting him to break new grounds with every album - why, every song for that matter. In these excessive expectations we seem to be overlooking the fact that the score is excellent. It enhances every scene without grabbing attention. You stay with the scene letting the writing, acting, camerawork, score and editing conjure something breathtaking.

Except... except, all these positives don't add up into one gigantic overwhelmingly awesome movie.

Tamasha is a puzzle, that way. The film doesn't fully work. We sense what we are expected to feel but often, we don't. The whole stretch in Corsica feels like a waste of money. You don't actually commune with Ved and Tara as they are having all that super fun. For no fault of Kapoor and Padukone. They seem like they're genuinely enjoying themselves, but we are still distant observers. We aren't ethereally transported into their lives.

Neither are we into Ved's magical storyland. The film is called Tamasha because Ved's fantasies play in the Tamasha drama style. While you might be able to appreciate the rustic, the very desi style of theatre on its own, this doesn't mesh well with the avowedly urban and contemporary quality of the rest of the film. That isn't to say such a merge shouldn't be attempted - we merely say the attempt didn't work in this case.

We said Tamasha is a puzzle. Indeed, if the acting is great, the music pleasant, the cinematography adroit, the editing excellent, and the writing plain extraordinary, what could possibly go wrong? To ferret out the problem here, let's employ the Holmesian maxim "When you have eliminated the impossible, whatever remains, however improbable, is the truth". We eliminated every other department. What remains, sadly, is the direction.

It would sound improbable that Ali didn't do a great job of helming the film - the same guy who made Highway, Rockstar, Socha Na Tha, and *gasp* Jab We Met. But give it a thought - Ali was always an exceptional writer whose scripts shone through, but somehow none of his films feels fully realised. He makes obvious blunders sometimes (like the female lead casting in Rockstar), and at other times, the issue isn't very tangible (like in Love Aaj Kal - it's good, but you know something is off).

Tamasha has some truly inspired direction - the scenes where the conflict starts rustling are a true win, for instance. But the entire plot is predicated on the magicality in which you can lose yourself. The thing is, you don't. You don't get immersed in the fun romance parts. The drama is where the juice is and you appreciate the movie for it, but no, the joy doesn't come through where it should.

Ali tries to be a dream peddler with this one, with only partial success. Tamasha could still inspire you if you looked beyond the execution and peered into the heart of the story. We'll call a spade a spade, and tell you that you might not get as entertained as you'd expect from a Kapoor-Padukone romance. However, we hope this mild misfire doesn't really impact Ali's own dreams - he does have some really good ones, you know.
Share. Save. Connect.
Tweet
TAMASHA (HINDI) SNAPSHOT 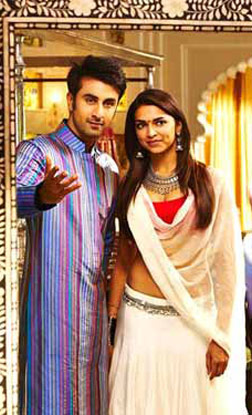 Stay away if you value your money. This is just pseudo psycho-babble crap masquerading as


Pros: Nothing that I can think of. You do get to see Corsica though.
Cons: Script, Screenplay, BGM, Music, and everything else
RATING
1
rajshekhar on 24th Dec 2015, 7:35pm | Permalink
by the way, Dilwale trailer is crap and the movie is a crap as well
rahulsachinsourav123 on 30th Nov 2015, 12:18am | Permalink
Well its very clear that u r a die hard fan of SRK, otherwise why do u keep on making references to him and his new movie, while ask here is to give ur feedback on this specific movie? And did they come and tell u that they are challenging SRK-Kajol pair? If I remember it right, Ranbir himself clarified in press that SRK-Kajol pair is the ultimate in romance and they are no match for it. So it doesn't make sense for that comparison here.

Secondly I am sure you are not sort of person who got taste for "jara hat ke" sort of movies. I am not saying this movie is not a great one but it has its good moments and flaws as well. But calling it abominable is far fetched statement.

ADVERTISEMENT
This page was tagged for
tamasha movie kickass in hindi
tamasha movie
Tamasha (Hindi) hindi movie
Tamasha (Hindi) reviews
release date
Follow @fullhyderabad
Follow fullhyd.com on
About Hyderabad
The Hyderabad Community
Improve fullhyd.com
More
Our Other Local Guides
Our other sites
© Copyright 1999-2009 LRR Technologies (Hyderabad), Pvt Ltd. All rights reserved. fullhyd, fullhyderabad, Welcome To The Neighbourhood are trademarks of LRR Technologies (Hyderabad) Pvt Ltd. The textual, graphic, audio and audiovisual material in this site is protected by copyright law. You may not copy, distribute, or use this material except as necessary for your personal, non-commercial use. Any trademarks are the properties of their respective owners. More on Hyderabad, India. Jobs in Hyderabad.