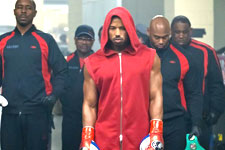 Sonali Dabade / fullhyd.com
EDITOR RATING
8.0
Performances
Script
Music/Soundtrack
Visuals
9.0
8.0
8.0
8.0
Suggestions
Can watch again
Yes
Good for kids
Yes
Good for dates
Yes
Wait to rent it
Yes
The year was 2015. Sylvester Stallone was busy reliving his glory days with his Expendables franchise. A young filmmaker pitched him a unique idea and the result was Creed. It was akin to capturing lightning in a bottle, rejuvenating the Rocky franchise by breathing fresh new life into it. And now, in 2018, we have Creed II in which Rocky's greatest rival returns to make proceedings complicated for young Adonis Creed.

Three years after his spirited loss to "Pretty Boy" Ricky Conlan, Adonis Creed (Michael B Jordan) is now the world heavyweight boxing champion under the guidance and mentorship of the legendary Rocky Balboa (Sylvester Stallone). He proposes to girlfriend Bianca (Tessa Thompson), and is ready to build a life together. Everything seems hunky-dory until we are transported to the arid landscapes of Ukraine.

Growing through the boxing ranks of Kiev, Ukraine, is another famous prodigy, Viktor Drago (Florian Munteanu), son of Ivan Drago (Dolph Lundgren). Viktor is training hard to restore his family's pride after his father was shunned by his country, Russia, because of his loss to Rocky all those years ago (spoiler for those who haven't watched Rocky IV). His mother has left the family because of this "shame" brought about by Ivan. Ivan fuels Viktor's anger and quest for redemption for the Drago name, resulting in Viktor challenging Adonis to a fight before landing in America.

The last time a Creed and a Drago faced each other, the fight ended in tragedy for Creed, with Ivan Drago killing Apollo Creed in the ring. What transpires when it inevitably happens again, and how Rocky and Adonis deal with the weight of history bearing down on their shoulders, forms the crux of the movie.

Adonis' spirit and Rocky's resilience undoubtedly carry into this new entry in the franchise. The emotional weight of the fight between Adonis and Viktor, both inside and outside the ring, is felt not just by the characters in the movie but also by the audience watching it. The vintage montages of Rocky training and motivating Adonis are inspirational, and the fight sequences are choreographed to evoke unbridled passion among hardcore fans and first-time watchers alike.

The movie builds admirably on Adonis' relationships with the people around him. His interactions with Rocky, Bianca and Mary Anne (Adonis' adoptive mother played by Phylicia Rashad), people who he treasures the most, are all compelling scenes that play out impeccably. These are woven beautifully with the aforementioned fight sequences, thus balancing the overall narrative of the film.

What Creed II does differently from the more often used "hero overcomes a larger than life threat" trope is to give the antagonists, the Dragos, a depth and gravitas that makes the movie truly stand out. You can see the conflict etched on Viktor's face in every scene he has, even the ones in which he is absolutely terrifying as a boxer. Sure, we all want Creed to win, but it is impossible not to feel sympathy for Viktor Drago and all the reasons he is fighting for.

Dolph Lundgren and Florean Munteanu as Ivan and Viktor Drago have the difficult task of looking menacing and vulnerable at the same time. Both accomplish this with flying colours and fit their roles perfectly. It is Florean Munteanu who stands out, and doles out a certain dose of muted heartbreak that makes a small part of you want to support him. Tessa Thompson shatters the regular wife/girlfriend cliché and builds her own persona. Maybe one day we'll see a Bianca Taylor movie made in which we talk about her accomplishments as a musician. Sylvester Stallone gives yet another commendable performance as Rocky, an iconic role that he created and that is adding to his legacy one movie at a time.

The star of the show is unquestionably Michael B Jordan as the titular Creed. He portrays the conflict of living up to his father's career, overcoming what the latter couldn't, and building the legacy of his own to absolute perfection. Creed needed to step out of Rocky's shadow, both as a character and as a franchise, and Jordan truly makes this movie his very own. Adonis' raw pain, heartbreak and feeling of inadequacy are plain for all to see, emerging from the screen and diffusing into the minds of the audience. It is this that immensely excites us for the future projects of this talented actor.

Steven Caple Jr., who took over the directorial duties from Ryan Coogler, is competent in executing the poignant moments of the film. The fight sequences have sufficient energy to get the audience invested, though none as breathtaking as the single-shot fight from the first movie. The music and background score are in sync with the tempo of the film, and elevate the training montages to adrenalin-inducing sequences.

Creed II is a fantastic experience throughout, and the viewing pleasure is enhanced if you watch it as part of an audience in a theatre. Together, Creed and Creed II tell a great story of and for Adonis Creed, who has a beautiful arc throughout both films and frankly doesn't need a third as it may lead to a decadence of sorts.
Share. Save. Connect.
Tweet
CREED 2 SNAPSHOT 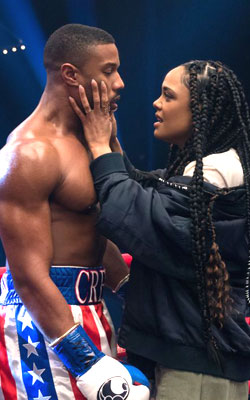 ADVERTISEMENT
This page was tagged for
Creed 2 english movie
Creed 2 reviews
release date
Michael B Jordan, Sylvester Stallone
theatres list
Follow @fullhyderabad
Follow fullhyd.com on
About Hyderabad
The Hyderabad Community
Improve fullhyd.com
More
Our Other Local Guides
Our other sites
© Copyright 1999-2009 LRR Technologies (Hyderabad), Pvt Ltd. All rights reserved. fullhyd, fullhyderabad, Welcome To The Neighbourhood are trademarks of LRR Technologies (Hyderabad) Pvt Ltd. The textual, graphic, audio and audiovisual material in this site is protected by copyright law. You may not copy, distribute, or use this material except as necessary for your personal, non-commercial use. Any trademarks are the properties of their respective owners. More on Hyderabad, India. Jobs in Hyderabad.