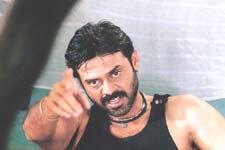 For starters, here action does not mean high-octane car chases or even slick escapes that we've never seen before, but just men randomly being hurled into the air and baddies landing up with broken bones and dysfunctional jaws. It pretends to be a gangster movie, but there is more of jing-bang and less of gang-gang wars. No smart tactics, no surprise moves and absolutely no strategies. 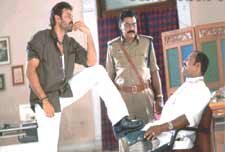 Then again, it's supposed to be about the reform of a baddie, but the transformation is so boring, we wish Venky had remained the gangster he started off as. There goes Gemini, losing several precious stars in its rating despite having Venky, one of the finest stars of Tollywood.

Gemeni (Venkatesh) is tapori gangster in the sleazy underbelly (???) of Vijayawada, and is the next VIP in this Andhra town after Goddess Kanakadurga. But it's his mannerisms like the 90-degree V with his right hand and the reverse of his left, the lick of the thumb before delivering a deadly blow and his pan-chewing style that are more amusing than his gangster activities. His life is essentially about settling scores with Ladda (Kalabhavan Mani), the incredibly eccentric Dada.

One fine day, a new, hotshot cop (Murali) marches in, says he is sick of the two gangs creating a ruckus, and puts them behind the bars. The twosome will be set free only if they promise to reform and stop the gang wars. While Ladda feigns to be a changed man, Gemeni is serious about turning a new leaf. Why? Because he's in love with Manisha (Bhairavi).

But Ladda won't leave Gemeni in peace because he wants several scores settled. So Gemini is stuck in trying to change for his sweetheart and battling his urge to get back at Ladda. How his love gets the better of his bad ways is the rest of the movie.

While Venky's movies have always been known for their wry humor and light comedy (Nuvvu Naaku Nachchaav, for instance), this one has slapstick. Those interludes of Gemeni trying to impress Manisha's parents and some of his moves against his opponents are remotely amusing. How funny would Venky look chasing a silly mosquito and in the process slapping rears?

Even more ridiculous is the manner in which we are made to believe that Gemeni is a changed man, post-lockup session with Ladda. The only change we notice is that he stops wearing his black, unwashed baggy shirt and starts wearing clean, semi-starched checked formal shirts post-transformation.

Then of course is the total lack of the romance element in the movie. There is hardly any interaction between Gemeni and Manisha, yet we are made to believe they are ready to do anything for each other. Piff!

Venky and Mani are the only redeeming factors in the movie. The Victory star shows lots of style and attitude and carries off the gangster's role with his over-the-top mannerisms. But the wow factor of the movie certainly are Kalabhavan Mani's antics (he's also in the Tamil original). A professional mimic artiste, when Mani prowls like a feline or ambles like a camel, darts his tongue in and out like a slimy reptile or prances around like a livid monkey, he is simply mind-blowing. The only time that there is a reaction from the audiences is when Mani comes on screen. Mani, yeh dil maange more of you!

Bhairavi is only seen and barely heard. Two songs and four ghaghra cholis is all she gets. The music by RP is hardly inspiring. While the title song seems to be doing the rounds on the happening lists, it has been inspired from its Tamil original. So no marks there.

The verdict: Fans, this way please. For the others, the exit is to your right!
Share. Save. Connect.
Tweet
GEMENI SNAPSHOT
See Gemeni full details
GEMENI USER REVIEWS
1 - 10 OF 10 COMMENTS
POSITIVE  |  NEGATIVE |  NEWEST  |  OLDEST  |  MOST HELPFUL  |  LEAST HELPFUL
USER RATING
5.1
54 USERS
Performances
Script
Music/Soundtrack
Visuals
NA
NA
NA
NA
Can watch again - NA
Good for kids - NA
Good for dates - NA
Wait to rent it - NA
Justin Austin on 5th Jul 2007, 9:51pm | Permalink
cool person
RATING
10
Ramesh on 20th Oct 2002, 4:17am | Permalink
This is definitely a bad movie from Venkatesh... The role is not good. Why Venki is doing films like Vasu and Gemini, only he knows. It will be good if he chooses a family entertainer next time, otherwise the same history will repeat. he still has to learn some action skills like comedy... he is unbearable in comedy.
RATING
2
Vasu on 15th Oct 2002, 3:18am | Permalink
i am a venki fan, and i was disappointed after watching the movie... it is an old story, and venki didn't learn lessons from his last movie, vasu.
RATING
2
Karthik on 13th Oct 2002, 1:06pm | Permalink
venky, overall it is a good movie to watch, but i can't see u with a beard. i thought you would have learnt from vasu not to copy the dil chahta hai style. atleast u should have shaved in the second half. anyway, don't repeat it. if u want hits do this. bye.
RATING
6
Ramos on 13th Oct 2002, 2:15am | Permalink
One of the year's top ten movies.
RATING
10
Ranga Rao on 12th Oct 2002, 3:25pm | Permalink
Worst movie that I have seen in recent days. I think the time of the old heros has gone. It is better for them to quit movies.
RATING
2
The Indefeasible on 12th Oct 2002, 12:08pm | Permalink
Dear Ms Manju Latha Kalanidhi:
Can you please write in a simple, clear and distinct english. Your writeup is cluttered, clogged, incoherent and incongrous. For example: "But it's his mannerisms like the 90-degree V with his right hand and the reverse of his left, the lick of the thumb before delivering a deadly blow and his pan-chewing style that are more amusing than his gangster activities." Regards
RATING
4
Ranga on 12th Oct 2002, 1:33am | Permalink
Better entertainer than Indra and Allari Ramudu.
RATING
8
Raghu on 12th Oct 2002, 12:29am | Permalink
Enough of this Tamil remakes. Can't Tollywood come up with its own stories??? Venky looks even more horrible with his new hairstyle struggling real hard to cover his balding head.
RATING
2
Raj Vaidik on 11th Oct 2002, 11:28pm | Permalink
Venky, you dissapointed us! We bunked college and got to the mor show but...
RATING
4
LEAVE A COMMENT
fullhyd.com has 700,000+ monthly visits. Tell Hyderabad what you feel about Gemeni!
MORE MOVIES
Latest Reviews
The 355
83
83 - Telugu
Shyam Singha Roy
The Matrix Resurrections - H...
more
The Matrix Resurrections
Pushpa: The Rise - Hindi
Pushpa: The Rise
Spider-Man: No Way Home
Spider-Man: No Way Home - Hi...
Spider-Man: No Way Home - Te...
Chandigarh Kare Aashiqui
Akhanda
Satyameva Jayate 2
Ghostbusters: Afterlife
Contemporary Reviews
Cat Woman
Finding Neverland
The Aviator
Seemasimham
Vishnu
more
High Society
My Brother Nikhil
Arjun Pandit
Jurm
Page 3
Malliswari
Avunanna Kaadanna
Main Aisa Hi Hoon
Cheppalenu Aagalenu
Random Reviews
Spy Game
Love Ke Liye Kuch Bhi Karega
Evandoi Srivaru
Manoharam
The Forbidden Kingdom
more
Ganesh (2009)
Break Ke Baad
Veedu Theda
The Collection
Varna
Romeo
Thanu Nenu
Mom (Telugu)
2.0 (Tamil)
Rang De (Telugu)
SEARCH MOVIES
Dissatisfied with the results? Report a problem or error, or add a listing.
ADVERTISEMENT
SHOUTBOX!
{{todo.name}}
{{todo.date}}
[
ip{{todo.ip}}
]
{{ todo.summary }}... expand »
{{ todo.text }} « collapse
First  |  Prev  |   1   2  3  {{current_page-1}}  {{current_page}}  {{current_page+1}}  {{last_page-2}}  {{last_page-1}}  {{last_page}}   |  Next  |  Last
{{todos[0].name}}

ADVERTISEMENT
This page was tagged for
Gemeni (film)
Gemeni telugu movie
Gemeni reviews
release date
Venkatesh, Bhairavi
Follow @fullhyderabad
Follow fullhyd.com on
About Hyderabad
The Hyderabad Community
Improve fullhyd.com
More
Our Other Local Guides
Our other sites
© Copyright 1999-2009 LRR Technologies (Hyderabad), Pvt Ltd. All rights reserved. fullhyd, fullhyderabad, Welcome To The Neighbourhood are trademarks of LRR Technologies (Hyderabad) Pvt Ltd. The textual, graphic, audio and audiovisual material in this site is protected by copyright law. You may not copy, distribute, or use this material except as necessary for your personal, non-commercial use. Any trademarks are the properties of their respective owners. More on Hyderabad, India. Jobs in Hyderabad.