Master And Commander - The Far Side Of The World Review 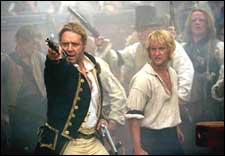 Rewind to the 1800s - a time when Napoleon's army had only the British to contend with on the path to world supremacy. A time when wars were waged on the ruthless ocean against the ebbs and flows of sheer luck mostly, and soldiers were kept warm by, yes, patriotism and the call of duty, but also the more immediate comfort of being sure that their Captain knew what the hell he was doing. If you followed him to the far side of the world, he'd make sure you wouldn't fight in vain.

Captain Lucky Jack Aubrey (Russell Crowe) is a proud seafarer completely in tune with the ship he commands, and has so much of his "blood running in its walls that it's almost a relative". He has the complete self-assurance of a leader who's had to make some tough calls on himself and his men, and one who doesn't comprehend defeat as something that happens to him. This might be misguided, but it's also utterly beguiling, and the way Crowe plays it, utterly believable. 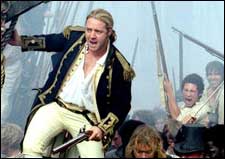 One unexpected morning at the start of the film, HMS Surprise, Aubrey's ship, is attacked by an enemy vessel, the Acheron (or the Phantom, as the more superstitious on board call it). Smarting from that stab in the dark, Aubrey is determined to track the enemy through the high seas and take it captive. The film is a tale of this chase and the price it exacts.

But it's also an evocatively told story about men who are struggling to keep their grip on the civilization that they've set out to defend. Hierarchy is threatened when the men gang up against an officer and push him over the edge to suicide. The futility of war is only too clear to the ship's surgeon and naturalist, Stephen Maturin (Paul Bettany, who gets better every time). A dear friend of Aubrey's, he is the only one on the ship to suspect the role of the Captain's ego in the entire chase for revenge.

Another endearing character is the painfully young Lord Blakeney (Max Pirkis), a thirteen-year-old who braves the amputation of his arm in a beautifully shot sequence and who later goes on to command the deck during the final battle.

For a movie shot on such a large scale, Master And Commander is full of touching detail and some pretty breathtaking cinematography. Warships firing at each other, orange blasts through the sea mist; the HMS Surprise photographed with such love, you wince when a gunshot splinters through its side; the patching of a sailor's fractured skull with a coin; the merciless storms and the violins in the narrative background: these are elements that remain with you. And ones that will probably win this film a couple of Oscars this year (Best Picture, Best Director). 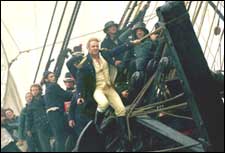 After a brief stopover at the enchanted Galapagos Islands, the ship slowly gains on its target. The fight of capture is long-drawn, and loses you after a point. But it isn't over even when it is over. A twist in the tale has Aubrey and his men set off on another long quest as the credits roll. An ending that leaves you with a vague sense of incompletion.

Master And Commander is tedious in parts - especially the fights - but it will draw you into an era that had altogether different concerns and ideas. The director draws from the pages of Patrick O'Brian's 20-part series, images that throb with life, and a very real sense of what it must feel like to stay adrift on an ocean of surprises.
Share. Save. Connect.
Tweet
MASTER AND COMMANDER -... SNAPSHOT
MASTER AND COMMANDER - THE FAR SIDE OF THE WORLD SNAPSHOT
See Master And Commander - The Far Side Of The World full details
MASTER AND COMMANDER -... USER REVIEWS
MASTER AND COMMANDER - THE FAR SIDE OF THE WORLD USER REVIEWS
1 - 4 OF 4 COMMENTS
POSITIVE  |  NEGATIVE |  NEWEST  |  OLDEST  |  MOST HELPFUL  |  LEAST HELPFUL
USER RATING
5.3
9 USERS
Performances
Script
Music/Soundtrack
Visuals
NA
NA
NA
NA
Can watch again - NA
Good for kids - NA
Good for dates - NA
Wait to rent it - NA
Ajay Sreebhashyam on 10th Feb 2004, 11:20am | Permalink
Agreed brilliant cinematography and directorial genius in some scenes. But these r so few and far between. The story is severely crippled by an utter lack of purpose. And the climax fight scenes r just crap.Sincerely hope this one doesn't win in the categories u mentioned, Ms. Menon.
RATING
4
PSD on 9th Feb 2004, 8:38am | Permalink
A mixture of predictable boredom and unpredictable boredom.
RATING
4
Jethro on 8th Feb 2004, 9:22pm | Permalink
i believe ur reviewer goes by hype and the number of oscars that a movie is slated to win....she is obviously charmed by distinctly average movies
RATING
4
Vivek Vivek on 5th Feb 2004, 4:26am | Permalink
And the fact that this movie got nominated for 10 Oscars makes this a much watched movie. Psst.. i have seen the movie in a shady Malay print and i say ...don't miss it.
RATING
4
LEAVE A COMMENT
fullhyd.com has 700,000+ monthly visits. Tell Hyderabad what you feel about Master And Commander - The Far Side Of The World!
MORE MOVIES
Latest Reviews
SR Kalyana Mandapam
Ippudu Kaaka Inkeppudu
Thimmarusu
Kadhanika
Shukra
more
Deyyam - 2021
Tempt Raja
Vakeel Saab
Wild Dog
Sulthan (Telugu)
Sulthan
Rang De (Telugu)
Saina
Aranya
Chaavu Kaburu Challaga
Contemporary Reviews
Shankar Dada Zindabad
Bhool Bhulaiyaa
Bas Ek Pal
Shankar Dada MBBS
Tapana
more
The Last Samurai
Van Wilder - Party Liaison
Love Today
Solaris
Footpath
Woh Tera Naam Tha
The Matrix Revolutions
Lahiri Lahiri Lahirilo
Pellam Oorelte
Random Reviews
Spy Game
Arjun Pandit
Evandoi Srivaru
Manoharam
The Forbidden Kingdom
more
Ganesh (2009)
Break Ke Baad
Veedu Theda
The Collection
Varna
Romeo
Thanu Nenu
Mom (Telugu)
2.0 (Tamil)
Rang De (Telugu)
SEARCH MOVIES
Dissatisfied with the results? Report a problem or error, or add a listing.
ADVERTISEMENT
SHOUTBOX!
{{todo.name}}
{{todo.date}}
[
ip{{todo.ip}}
]
{{ todo.summary }}... expand »
{{ todo.text }} « collapse
First  |  Prev  |   1   2  3  {{current_page-1}}  {{current_page}}  {{current_page+1}}  {{last_page-2}}  {{last_page-1}}  {{last_page}}   |  Next  |  Last
{{todos[0].name}}

ADVERTISEMENT
This page was tagged for
Master And Commander - The Far Side Of The World english movie
Master And Commander - The Far Side Of The World reviews
release date
Russell Crowe, Paul Bettany
theatres list
Follow @fullhyderabad
Follow fullhyd.com on
About Hyderabad
The Hyderabad Community
Improve fullhyd.com
More
Our Other Local Guides
Our other sites
© Copyright 1999-2009 LRR Technologies (Hyderabad), Pvt Ltd. All rights reserved. fullhyd, fullhyderabad, Welcome To The Neighbourhood are trademarks of LRR Technologies (Hyderabad) Pvt Ltd. The textual, graphic, audio and audiovisual material in this site is protected by copyright law. You may not copy, distribute, or use this material except as necessary for your personal, non-commercial use. Any trademarks are the properties of their respective owners. More on Hyderabad, India. Jobs in Hyderabad.